Imagery of Dark vs Light in James Joyce's "Araby"

The most remarkable imagery in Joyce’s’ “Araby” is the imagery of dark and light. The whole story reads like a chiaroscuro, a play of light and darkness. Joyce uses the darkness to describe the reality which the boy lives in and the light to describe the boy’s imagination – his love for Mangan’s sister. The story starts with the description of the dark surroundings of the boy: his neighborhood and his home. Joyce uses these dark and gloomy references to create the dark mood and atmosphere.

Turn in your highest-quality paper
Get a qualified writer to help you with
“ Imagery of Dark vs Light in James Joyce’s “Araby” ”
Get high-quality paper
NEW! AI matching with writer

Later, when he discusses Mangan’s sister, he changes to bright light references which are used to create a fairy tale world of dreams and illusions. In the end of the story, we see the darkness of the bazaar that represents the boy’s disappointment. On the simplest level, “Araby” is a story about a boy’s first love. On a deeper level, however, it is a story about the world in which he lives – a world inimical to ideals and dreams.

This imagery reinforces the theme and the characters. Thus, it becomes the true subject of the story.

The prevailing imagery of darkness shows that the boy’s spiritual environment is musty and dark.. “Araby” begins at dusk and continues through the evening during the winter. He chooses gloomy setting to be the home of a young boy. The houses in the street where the boy lives have “brown imperturbable faces” (40) ,his home has “gloomy rooms”(44) and the gardens where they play are dark.

In this darkness only the boy and his laughing and shouting companions “glow”. They are still too young to have succumbed to the spiritual decay of the adult inhabitants. But the boys must play in “dark muddy lanes,” in “dark dripping gardens,” near ” dark odorous stables” and “ash pits” (40 ). They use to “hid in shadows” (40 ) which are also part of the dark imagery.

Into this world of darkness appears a figure representative of the light and all that is ideal, Mangan’s sister. She is the contrast to the boy’s dark world so she stands out in his dark environment. The narrator describes her figure as: “defined by the light” (40). His youthful imagination sees her as a figure always surrounded with light. “The light from the lamp opposite our door caught the white curve of her neck” (43). Because of her the boy feels a surge of hope that now, in her love, he will find light. This girl becomes an image to him of all that he seeks in his dark surroundings. She has the power to set a flame in him. The boy tells us that her image, constantly accompanies him: “at night in my bedroom and by day in the classroom her image came between me and the page I strove to read”(43).

Her image accompanies him even in places “the most hostile to romance” and makes him feel as though he bears a holy “chalice” through a “throng of foes”-the Saturday evening throng of “drunken men, bargaining women, cursing laborers” (41), and all the others who represent his dark surroundings and have no conception of the mystical beauty his young mind has created in this world of material ugliness. Joyce refers to bright light when discussing Mangan’s sister in order to give her a heavenly presence. Plainly he has felt the summons to cherish the holy, the “light,” in this dark world of those who are hostile to the sacred.

The most significant role of the dark and light imagery appears in the end of the story in the bazaar. Here, the two imageries appear together but the end of the story is dark as the beginning. When finally the girl speaks to the boy she asks him if he is going to “Araby”. From that moment, the boy loses interest in his school and in everything around him. He thinks of nothing but the girl and the bazaar.

He can see nothing but her “dark house” and “her brown-clad figure touched by lamp-light” (44). He feels that if he can gain the girl the light will be restored to his dark existence. He goes to “Araby” to buy her some gift and win her heart.

James Joyce uses the lights of the bazaar to illustrate the boy’s confrontation with reality. When the boy reaches the bazaar he expects it to be open and lighted. However ,”nearly all the stalls were closed and the greater part of the hall was in darkness” (45 ). When he sees some lights there he remembers the reason he is there ” The sight of the streets…glaring with gas recalled to me the purpose of my journey” (46) – Mangan’s sister. But the light is there for a very short time. In the end, we see again the darkness image: “the light was out” , “the upper part of the whole was now completely dark”(46), the boy is “gazing up into the darkness” (46). With this darkness Joyce shows us the boy’s disappointment with his quest. The dark imagery shows that when he finds out that the bazaar isn’t what he expects it to be he realizes that his love exists only in his mind.

The theme of the story-the discrepancy between the real and the ideal is made final in the dark description of the bazaar, a place of tawdry make-believe. The story that begins with the light-dark contrasts ends with it. The fact that in the end of the story the bazaar is dark shows that his love, like his quest for a gift to draw the girl to him, ends with his realizing that his love exists only in his mind. The experiences of the boy illustrate how people often expect more than ordinary reality can provide and then feel disillusioned and disappointed.

This disillusion is shown in the end when the boy tells that he sees himself as a “creature driven and derided by vanity” (46). The boy senses the falsity of his dreams. He sees the dark reality and his eyes burn “with anguish and anger”. The last sentence reveals anger, hostility and a sense of harsh realization that his love for the girl was based on ignorance and self-deception. Realizing this, the boy takes his first step into adulthood.

Imagery of Dark vs Light in James Joyce's "Araby". (2016, Jul 02). Retrieved from https://studymoose.com/imagery-of-dark-vs-light-in-james-joyces-araby-essay 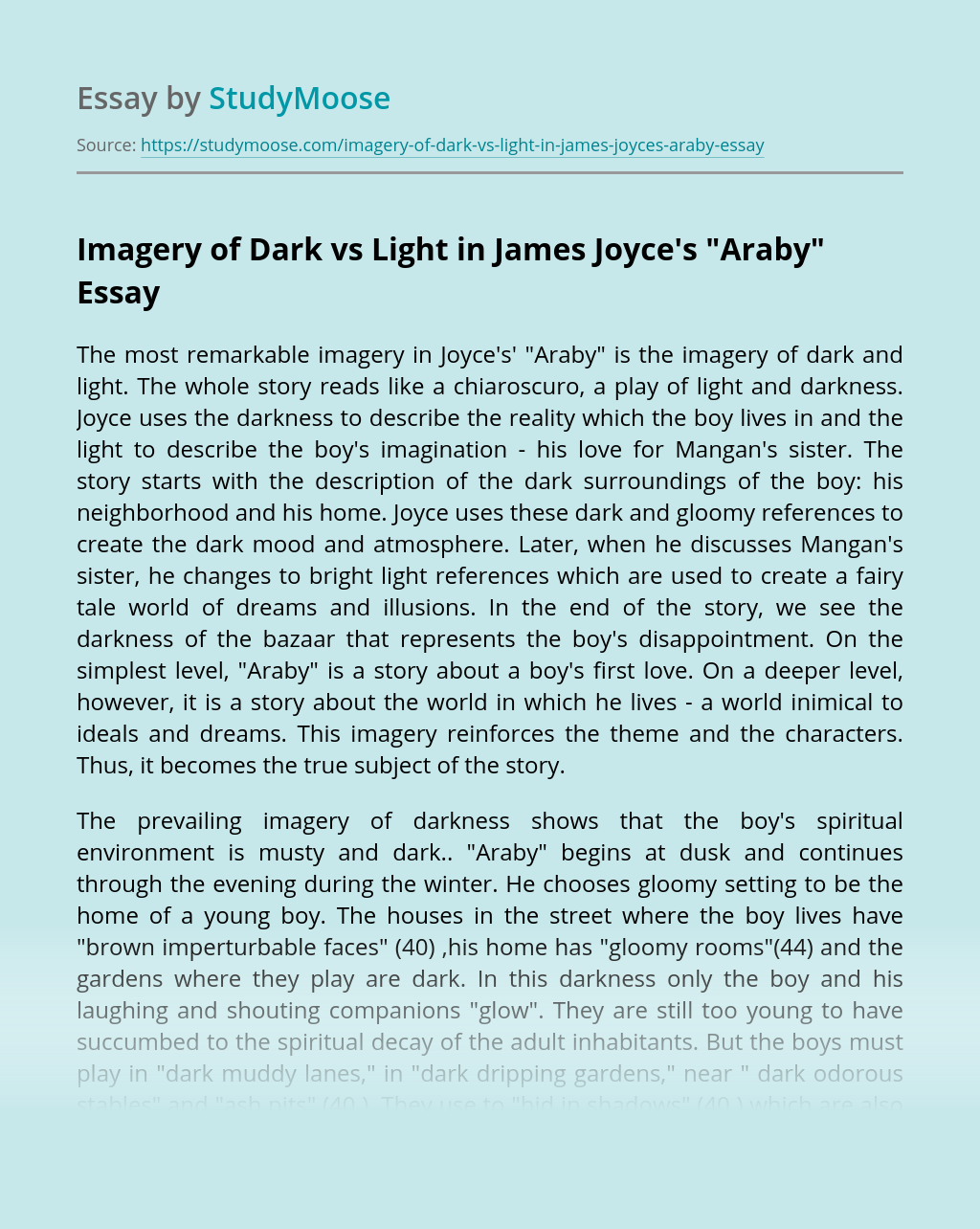 Turn in your highest-quality paper
Get a qualified writer to help you with
“ Imagery of Dark vs Light in James Joyce’s “Araby” ”
Get high-quality paper
Helping students since 2015
Stay Safe, Stay Original