Sometimes there are people who are so wicked and sly one can just feel filthy. Listening to them talk, hearing their words, and seeing their actions simply makes one’s skin crawl. During the reading and the watching of Othello it doesn’t take long to get this feeling about Iago. He is such manipulative, self-serving, and unethical individual; making it obvious he would be a male with a character disorder. A narcissist is one who is only concerned about one’s self, manipulative, and will use anybody to get what they desire.

Don't use plagiarized sources. Get your custom essay on
“ Iago’s ego in “Othello” by William Shakespeare ”
Get custom paper
NEW! smart matching with writer

There is no doubt that Iago is the devastating villain in this play. Without Iago’s dreadful traits and conniving actions this play would be extremely boring. He has actually been thought about one of the most villainous characters of all time. Being around a person this evil is extremely frightening, they are able to achieve so much with their control. In this play there is no time at all squandered introducing the real characteristics of Iago.

We see his self-serving anger concerns from the beginning. Iago fasts to mention his hatred for Othello (1.3.365).

Iago’s ego has been hurt by Othello claiming Cassio as his lieutenant and passing up Iago. Iago feels that he has way more experience in battle than Cassio and just pretends to serve Othello until he can get his revenge (1.1.10-40). Iago mentions later that Othello slept with his wife, Emilia: “And it is thought abroad that twixt my sheets he’s done my office” (1.

3.366-367). Roderigo is the first person to fall to his deceitful ways. Iago’s craftiness get Rodergio to trust him with his with his money; Rodergio says, “That thou, Iago, who hast had my purse as if the strings were mine…”. Iago states, “Put money in thy purse” (1.3.328) so that he might be able to win Desdemona’s love with gifts Iago will buy her. But the dishonest plan is here because he plans on keeping that money for himself. It is amazing to watch how quick and smart Iago can be with the other characters. He is able to quickly take a situation and find a way to use others as pawns to work his plan out. He is words and actions are so manipulative putting thoughts in others heads in order for them to assist him in his master plan. 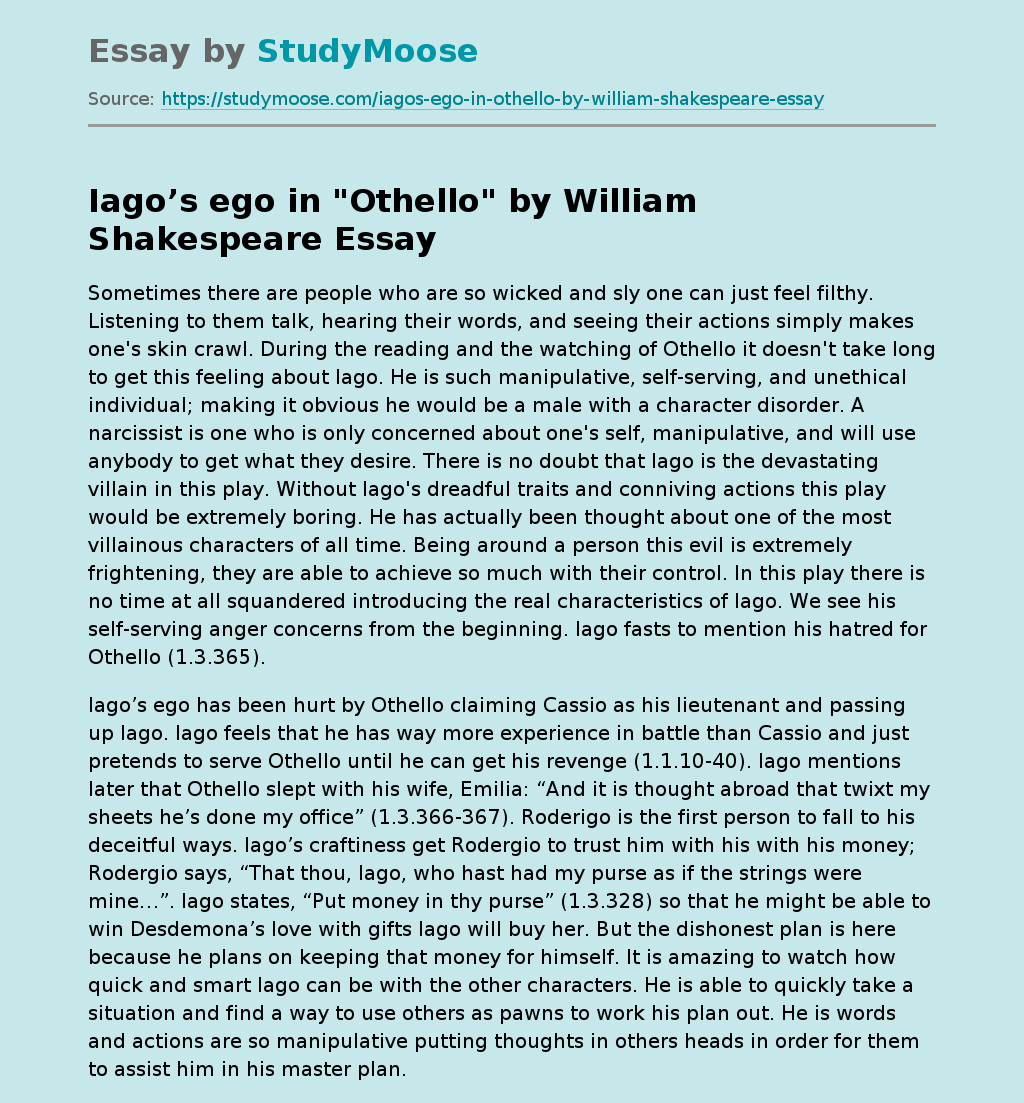