"I Felt a Funeral in My Brain" Poem Review

A review of the poem “I Felt a Funeral in My Brain” by Emily Dickinson.

“I Felt a Funeral in My Brain” by Emily Dickinson is an interesting complex statement on ther relationship between the body and the soul during a time of mental anguish. The poet uses imagery to evoke the mind in a state of mental shock. This is a five stanza poem on the nature of mental anguish. The poet conveys a sense of the mental pain which is torturing her by speaking of the pain as if it were a funeral being carried on in her mind.

Don't use plagiarized sources. Get your custom essay on
“ “I Felt a Funeral in My Brain” Poem Review ”
Get custom paper
NEW! smart matching with writer

In the first stanza, the poet states that she “felt a funeral” in her mind. She focuses particularly on the heavy and constant tread of the mourners’ feet, and says that it seemed as though the sense were breaking into the world ordinarily reserved for the mind. In stanza two, the poet continues the figure of the funeral. Now, with the mourners seated and the service beginning, a drumming noise associated with the service numbs her mind.

The image of the seated mourners suggest that some order has been restored. However, the mind is again under attack, and the beating drum symbolizes the waves of feeling which numb the mind. In the third stanza, the poet states that she hears the mourners lift the coffin. Again, they move slowly across her soul with feet which seem encased in lead. Am intensification of attack on the mind by bringing together images of sound and weight is suggested.

She hears the mourners as they lift the coffin and begin to move, and she feels their feet which seem to be encased in lead. In stanza four, the figure is continued in the sound of a tolling bell. The heaven seems to have become a great bell which is ringin, and all creation responds as though it were an ear. In the last two lines, she introduces the images of a shipwreck. The poet personifies silence, and says that it seemed as though she and silence had been stranded together, thus consulting an unusual race. In the last stanza, the poet compares reason to a plank of wood which breaks as a result of being overstrained. The image is continued with the poet dropping away from this broken plank into a universe filled with new worlds. It suggests that the mental anguish has become too much, and that the sense world had won out and a complete mental bbreakdown had occurred. The image is that of the speaker falling through infinite space. It suggests that the order which the mind imposes on reality has been disrupted, that the speaker is no longer subject to the mind.

"I Felt a Funeral in My Brain" Poem Review. (2020, Jun 02). Retrieved from https://studymoose.com/i-felt-a-funeral-in-my-brain-poem-review-essay 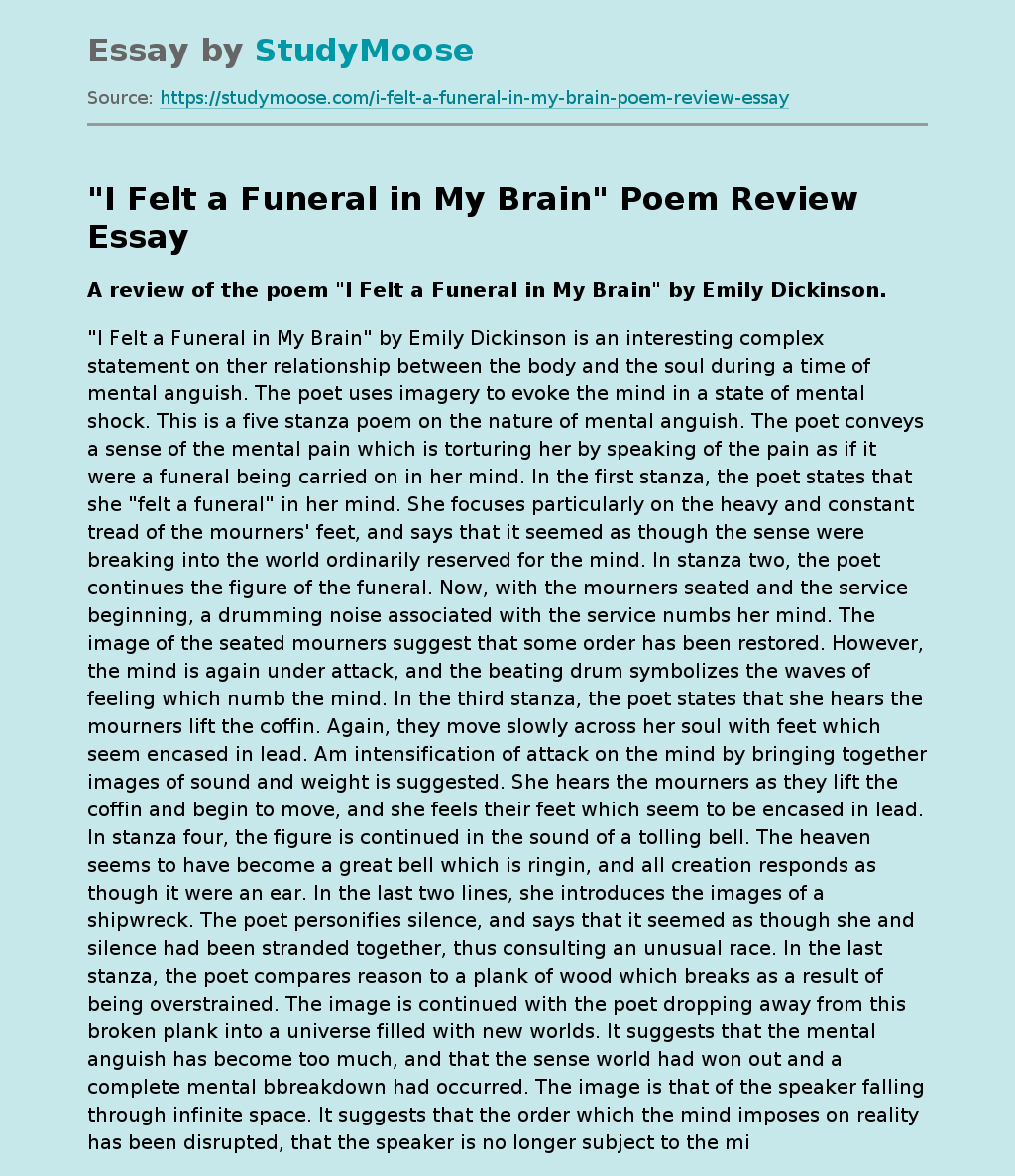