"I Felt a Funeral in My Brain" by Emily Dickinson

Emily Dickinson is one of the most famed poems of all time. Throughout her lifetime she wrote about 1800 poems though only a small number of of them were published. After her death her friend staggered onto to her poetry diaries and then later on he published three volumes of this poetry. Many of Dickinson’s poems dealt with death. Through her poems she depicts death in many ways. For instance in one of her poems she shows death as a calmer and soother.

Don't use plagiarized sources. Get your custom essay on
“ “I Felt a Funeral in My Brain” by Emily Dickinson ”
Get custom paper
NEW! smart matching with writer

In her poem Dickinson continues to talk about a funeral in her mind.

This poem is much like her other poems as it depicts the theme of Death and is written in a funereal mood. However, under the theme of death there’s something more the author wanted to say. This poem is constituted of five stanzas, each which consists of four lines. Also replication is used here as the words, treading, beating and down are repeated. This is important because it might point to hoe the speaker’s mental state is worsening.

Also anaphora is used as in the last stanza each line begins with the word And. The tone in this poem seems to be funereal because there are many things that suggest this.

The line “I felt a Funeral, in my Brain” could suggest that the speaker’s mental health is not all that good, and that the speaker might be on the brink of insanity. The line “Sense was breaking through” might indicate that the speaker finally realizes that he is going crazy and there is nothing he can do about it.

Here sense is used as something that finally makes the speaker realize what is happening to him. In the second stanza the speaker talks of a service that was being delivered. This service might suggest a long speech that is contributing to the downfall of the speaker’s mind. The word drum is very appropriately used in this stanza. The speaker sees the service as a drum; this service is beating and beating the speakers mind until the speaker cant feel anything. The last line of the second stanza says, “My Mind was going numb-”.

The last line might indicate that the speaker has gone from a sense of reasoning to a sense of not knowing anything, so then the speaker’s brain is finally dead. Also the first and second stanzas are linked as they both suggest the deterioration of the speaker’s brain. When an individual loses his or her sanity, it can be a gradual process. In some cases, the victim may not even be aware of when he or she took that final step over the edge from sane to insane. In the poem, “I Felt a Funeral in My Brain”; Emily Dickinson gives her readers an intense account of the horrific day her sanity was lain to rest.

The poem begins, “I felt a funeral in my brain, and mourners to and fro, kept treading, treading till it seemed that sense was breaking through” (Lilia Melani Home Page). The funeral Dickinson is feeling is the funeral of her own sanity. She is bidding a farewell to the sanity she once knew. The mourners attending the funeral are a representation of the many different emotions she experienced during that time. It is apparent that Dickinson was tortured by her own mind, and as her sanity left her, only the noise, i. e. the treading and unpleasant emotions, remained.

Lilia Melani states, “…the poet is not observing the funeral but is feeling it. She is both the observer and participant. ” Since she is a mourner and the mourned in the poem, not only is she overwhelmed with intense emotions, she is also filled with the nothingness of death. As the poem drones on, the author continues to describe the funeral, “And when they all were seated, a service like a drum kept beating till I thought my mind was going numb. ” Here we see the noise in her mind go from treading to the beating of drums – the clatter in her mind begins to increase as she travels deeper into insanity.

Dickinson becomes increasingly disturbed as the funeral service goes on – realizing that after the service was finished, the mind she knew would be no more. As the coffin is lowered into the ground, Dickinson states, “And I and silence some strange race, wrecked, solitary, here. ” Another writer observes, “The use of words associated with death give this poem an ominous and dark persona. ” Words such as, wrecked, solitary & silence give readers a look into her emotional state as she is being lowered into the ground. The lowering of the coffin represents the severity of her level of mental illness.

“And a plank in reason broke, And I dropped down and down–“, she is sinking lower and lower, and all the while the clatter continues. Death is forever, and it is apparent that as Dickinson wrote the poem she believed she would never return to her former self. As the poem ends, readers experience a sense of how truly disturbed this woman was. As she descends into the ground and being mourned by pieces of herself the poem becomes darker and darker. We witness not only the lowering of the coffin but the change in mood of the poem.

When the poem begins, we have no idea how panicked and disturbed Dickinson really is. The last lines of them poem reads, “And I dropped down and down, and hit a world at every plunge and finished knowing — then–“. William Vesterman’s says, “The poet seems too horrified to continue her recollection” (Praxispost. com). It seems as if everything suddenly hits her at once – the emotion of the mourners, the treading, the drums, the lowering of the coffin and what it represents and her mind’s death – and she is so overwhelmed that she snaps at the end. Emily Dickinson was not in denial about her mental state.

She even had the courage and the strength to attend her funeral and pay her respects to the self she once knew. However as she realized the finality of this death she snapped leaving readers hanging with questions that would never be answered based on what she was feeling during this time.

"I Felt a Funeral in My Brain" by Emily Dickinson. (2017, Apr 19). Retrieved from https://studymoose.com/i-felt-a-funeral-in-my-brain-by-emily-dickinson-essay 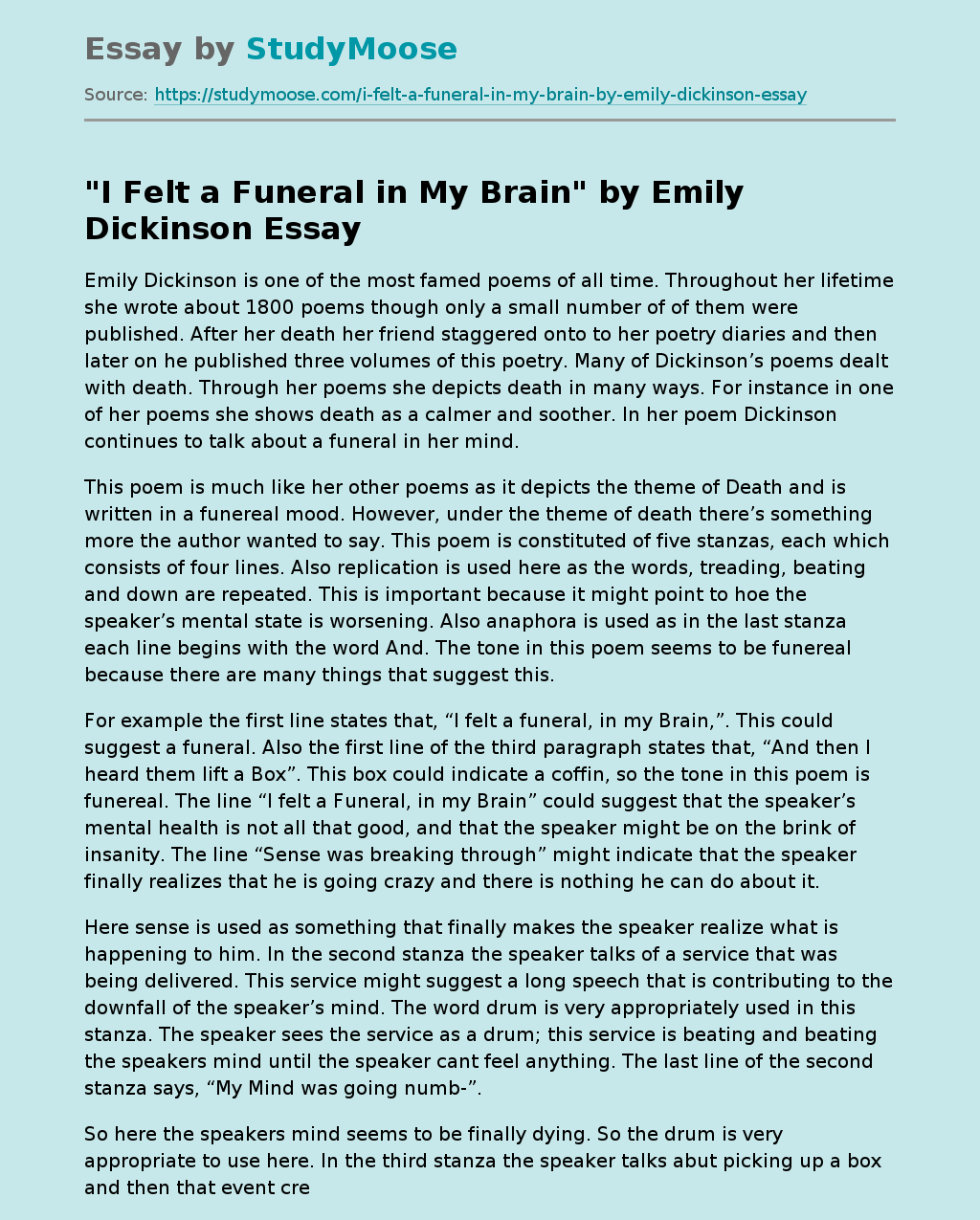