I Am the Messenger

I Am the Messenger by Makus Zusak Throughout the novel I Am the Messenger by Markus Zusak, the reader is able to perceive the big change that the main character, Ed Kennedy goes through. He receives some ace cards that gradually change his life. On the ace cards, he is given different tasks which force him to choose between acting as a hero and just keeping his normal life as a cabdriver. Edgar Street, Milla, Sophie, Father O’Reilly, Angie Carusso, and the Rose Brothers, all these messages together represent a turning point in Ed’s life.

Turn in your highest-quality paper
Get a qualified writer to help you with
“ I Am the Messenger ”
Get high-quality paper
NEW! AI matching with writer

Even though he has a low self-esteem, and he considers himself a loser; he tries his best to help all these people, as if it were his mission. He risks his life and he does it without waiting something in exchange. He even decides to become a vigilante for them. Now, Ed can be a truly hero and not a loser anymore, contrary to what he thinks about himself.

Helping all these people is having a good effect on him. Each address each card and each message that he delivers changes him and help him growth as a person. The very first message that Ed gets is one of the toughest ones.

Edgar Street forces him to be brave and stand up for this woman who doesn’t have anyone to protect her from her abusive husband. When he first tries, he feels ashamed since he gets too scared to act. However, as time goes, he feels like is time to act, and he gets the strength to confront the guy from Edgar Street.

On the contrary, the task with Milla and Sophie is easier. On one side, helping Milla and acting as Jimmy her dead husband gradually changes Ed. He carries about her and he tries her best to make her happy, since like in the first address, Milla doesn’t have anyone who takes care of her.

On the other side, Ed enjoys being with Sophie and just watching her run. The fourth message is Father O’Reilly. Ed works really hard in order to get more people to come to the Priest’s church, and he won’t give up, until the church gets crowded. He is extremely persistent with this address. Angie Carusso is a rest for Ed as Milla and Sophie were. The sixth message is very complicated. The Rose Brothers challenge Ed in a new way. He beats this little boy hoping that he is doing the right thing, and then he delivers the message by getting beaten. Either good or bad, every address has an effect on Ed.

Ed is not going to change all of a sudden; instead his transformation is going to take place gradually, and each message contribute for his change in a different way. Even though sometimes Ed’s work with the cards might seem easy, it is not at all, taking into account that Ed comes from a really poor background. Therefore, his personality, goals and way to see life are influenced by the culture that he was raised in. Ed has no aspirations or goals in life. He doesn’t want to go to college, and he just finds an easy job as a cabdriver with his friends. He thinks that there is nothing that he can accomplish in life.

Most people from really poor backgrounds just want to make easy money no matter how. Most likely, they wouldn’t do something for free, and they would never risk their lives for a stranger. Not even Ed’s closest friends would do something for him for free. “Marv would never even consider paying for me. That simply wouldn’t be on. Under normal circumstances, he’d rather die” (Pg. 189). However, Ed goes to every single address making his best effort, risking his life every time, and waiting nothing in exchange. This displays that Ed is a good person, but he is the one who needs to realize it.

The environment in which Ed was raised somehow forced him to become a vigilante. Poor towns like the one where Ed lives usually don’t have much police control. There is prostitution “The most interesting person I pick up is a prostitute-looking woman” (Pg. 121). There is vandalism. “I try to fight them off, but they are too many. I can feel blood crawling across my face, and bruises showing up” (Pg. 179). There is delinquency. ”The gunman’s gun is pointed at the nose of some poor girl behind the counter. She has a tie a sweat patches to fill the bag with money” (Pag. ). There isn’t enough police control. As an example, Darel and Keith can come in Ed’s house without struggle. All this influences together make Ed think, that if he doesn’t do anything for the people in the ace cards, then no one will. That’s when Ed becomes a vigilante and an intentional hero. When only he is the one who can act in order to help this entire people, and he needs to take the law by its hands. Ed’s character has a lot of things in common with the Batman. First of all, they both risk their lives in order to help people that they don’t even know.

Ed has a lonely life. The relationship with his mom is extremely bad, and he doesn’t talk to any of his siblings. His closest friends Marv, Ritchie and Audrey are like his family. Similarly, the closest thing that Batman has as a family is Arthur, Batman’s valet. Batman keeps his identity in secret by wearing a custom. Even though Ed doesn’t wear a costume, he keeps a really low profile. Moreover, Ed doesn’t get anything in exchange for accomplishing the job. He just helps disinterestedly and selflessly, and Batman does it too.

Neither Ed nor Batman have powers, they both are vigilantes which means that they both have to work harder for being heroes. Furthermore, helping people has a big effect on both them. In Ed’s case, helping others help his personal growth. It makes him a better person, and it transforms him. Markus Zusak’s character, Ed Kennedy, suffers a transitional transformation when he starts to deliver the messages in the ace cards. Every message that he delivers has an impact in his own life, but it is difficult for him to notice the change he is going through.

Before the ace cards, Ed thought that he would never be important, and that he would never be decisive in someone’s life. Now, he plays a vital role in this story, and every single message is crucial in his life as well. He even becomes a vigilante. He risks his life, job, and friends just because he is trying to deliver the messages. It is clear that he is trying to do his best for this people. Now, he is an intentional hero; now it is his choice. It isn’t hurried decision as the one in the bank robbery. Ed gets courage, bravery, patience, boldness, and kindness from every ace card. He is now an intentional hero.

I Am the Messenger. (2018, Aug 18). Retrieved from https://studymoose.com/i-am-the-messenger-essay 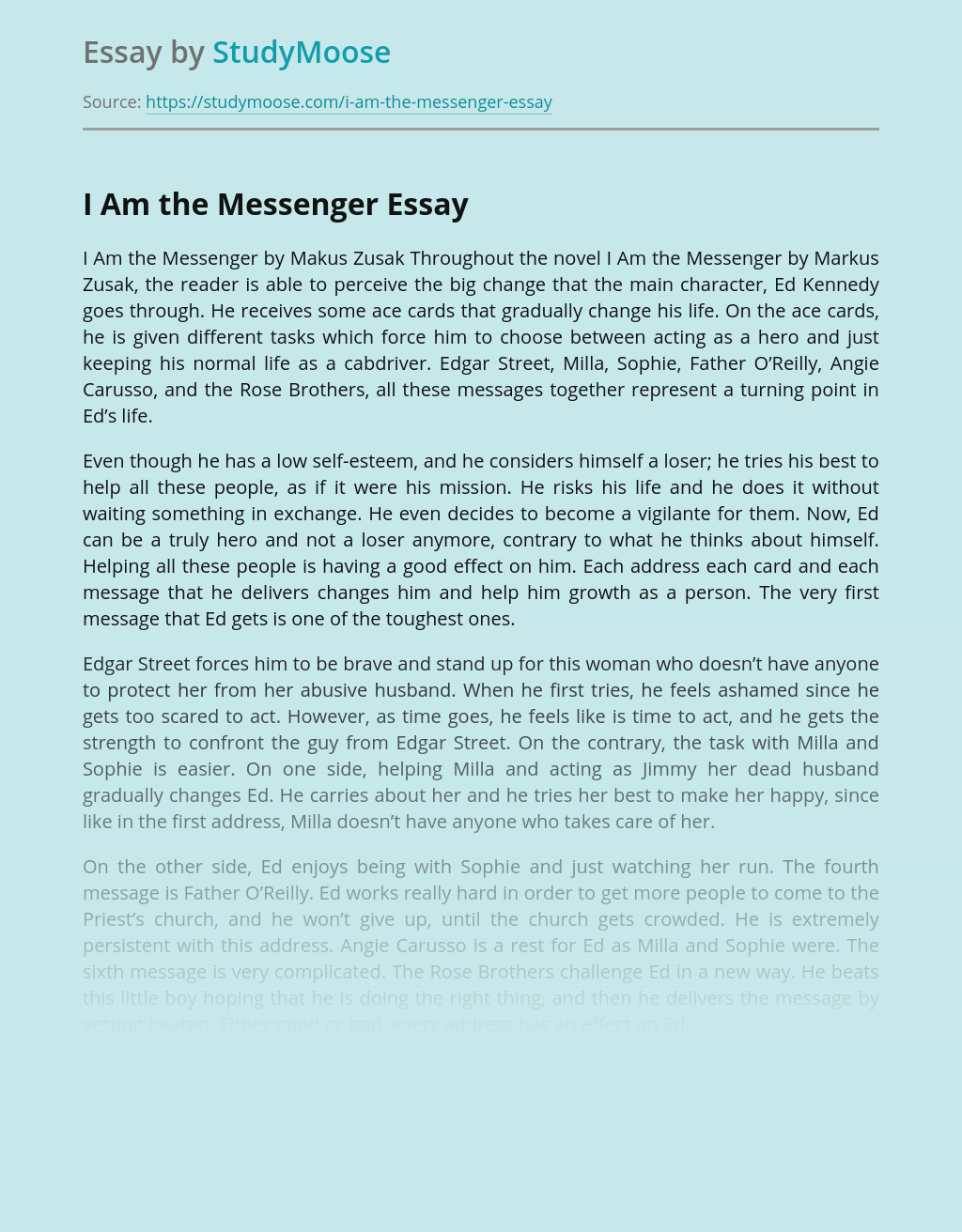 Turn in your highest-quality paper
Get a qualified writer to help you with
“ I Am the Messenger ”
Get high-quality paper
Helping students since 2015
Stay Safe, Stay Original