Star Wars Episode IV premiered in theaters on May 25, 1977. Directed by George Lucas, it became one of the first sci-fi movies to really make an impact in the film industry. Out of all the characters shown in the movie, one stands out. Luke Skywalker, a boy raised on the desert planet, Tatooine, from nothing, becomes a powerful Jedi. Luke makes the biggest change out of any of the other characters in the movie. Luke Skywalker is one of the main protagonists in Star Wars.

Turn in your highest-quality paper
Get a qualified writer to help you with
“ Star Wars: a New Hope Character Analysis ”
Get high-quality paper
NEW! AI matching with writer

Luke Skywalker, a young farm boy from a planet far from most civilized planets, discovers that he is destined to become a Jedi Knight and use the Force to save the galaxy from the Empire and their death machine, the Death Star. In this movie, the “hero’s journey” is played out. Luke’s ordinary world is his life on Tatooine as a farmer. He meets his mentor and is called to adventure when he finds Obi-wan and they receive the message for help from Princess Leia.

Luke’s refusal to call is him not wanting to leave home. Luke crosses the threshold when he decides to leave for Alderan.

Throughout the film, the Empire, especially Darth Vader, are shown to be the enemy. Luke’s approach to the inmost cave is represented by the groups near death experience in the garbage shoot. Luke’s main first ordeal was the tie-fighter fight in the Millennium Falcon and his reward is becoming a pilot. The road back is the trip back to the Death Star and the resurrection being fulfilled with the Death Star being eliminated.

Luke’s elixir is saving Princess Leia (getting the girl, who happens to be his sister). Luke is then awarded with a medal and earns the title of a hero.

His whole journey from start to finish led up to his gaining the hero status. Luke follows the normal elements of film. He takes the hero’s journey and successfully returns with the elixir, Leia. The one thing we do see is that he did not start out as a hero; Luke was nothing but a farm boy in the beginning. George Lucas used a long shot of Luke next to his home under the two suns, Tatoo I and Tatoo II, in one of the earlier scenes. He is shown to look very small compared to the vast desert he lived in. Towards the middle of the film, Luke starts to change and begins to use the Force.

The medium shot of Luke with the helmet over his eyes, practicing his lightsaber skills, shows his initial use of the Force. At the end of the movie, we see Luke turn of his tracking device and use the Force to shoot the rockets into the hole and blow up the Death Star. At the end of the scene, it cuts out to a medium long shot of the Death Star exploding, the Death Star being the subject. George Lucas shows Luke’s journey from a farmer to a potential Jedi. George Lucas did a good job at defining characters and their roles in the film. He made it obvious which characters fit which role and the importance they play in the movie. 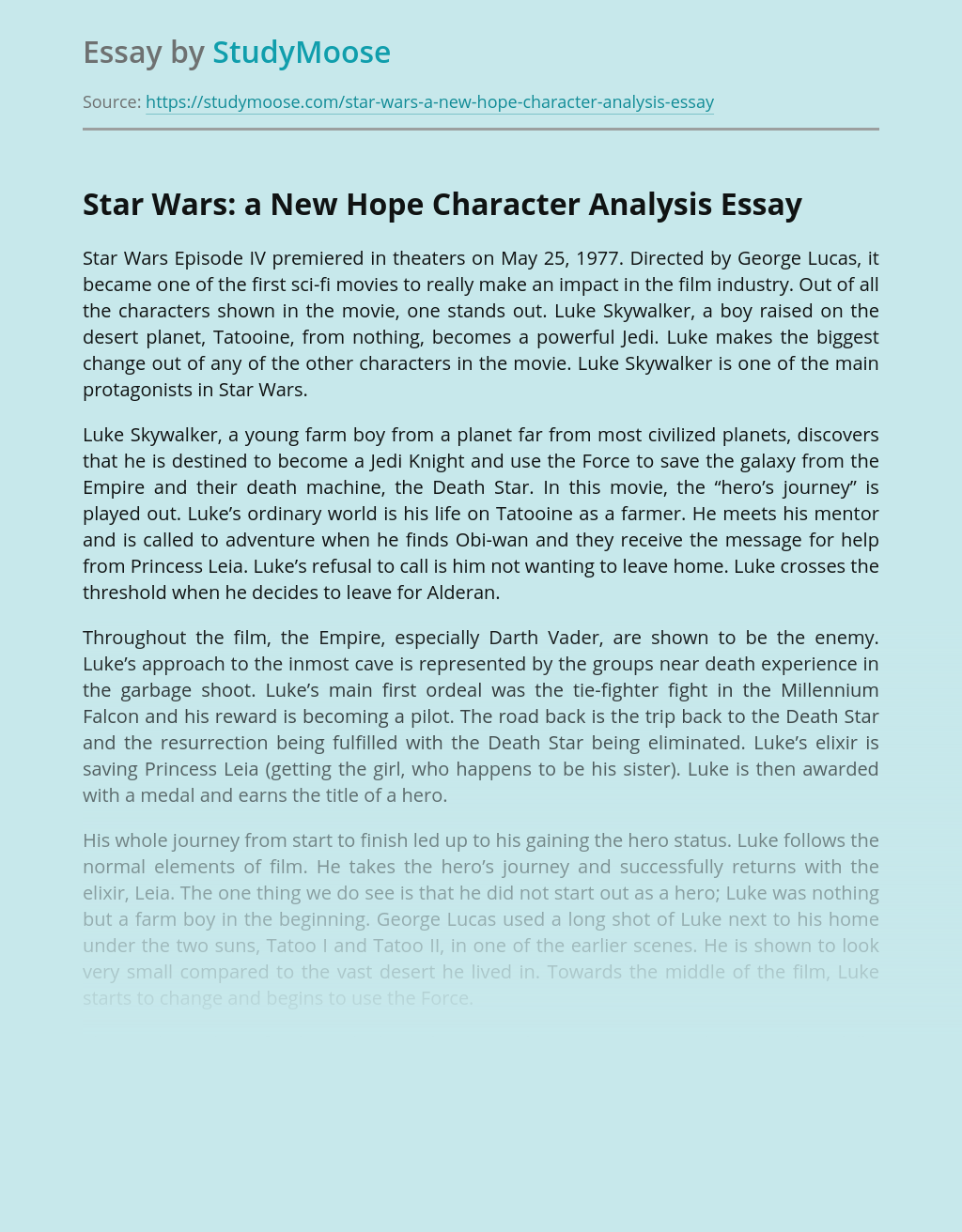 Turn in your highest-quality paper
Get a qualified writer to help you with
“ Star Wars: a New Hope Character Analysis ”
Get high-quality paper
Helping students since 2015
Stay Safe, Stay Original