Hunger of Memory: Is There Such a Thing As Private Life?

In his memoir Hunger of Memory: The Education of Richard Rodriguez, Rodriguez examines the relationship between his intimate, spanish-speaking childhood and the public life he leads as a student and a writer. A patchwork of often-conflicting identifiers — Mexican-American, economically-disadvantaged, Catholic, queer, and (eventually) writer — Rodriguez’s identity shifts constantly. Often attempting to simultaneously place himself into opposing categories – namely, public and private – Rodriguez further complicates his identity, never allowing the reader to define his individuality. A shifting tide, Rodriguez’s identity ebbs and flows, quietly eroding its cliffy shores only for an undertow to suddenly fling up sand and carve out another basin in the ocean floor.

Don't use plagiarized sources. Get your custom essay on
“ Hunger of Memory: Is There Such a Thing As Private Life? ”
Get custom paper
NEW! smart matching with writer

Like the sea, his identity Rodriguez’s is marked by one sole constant: change. In fact, the only term Rodriguez concretely defines himself with is Writer, a sort of meta-identity that allows him to fluidly, endlessly reshape his sense of self. Furthermore, because a writer cannot exist without its reader, Rodriguez makes his ultimate identity a public one, dependent upon the perspective and observation of onlookers.

Rodriguez discusses the often-conflicting influence of his Mexican heritage, life of poverty, catholicism, and queerness, but refuses to brand himself with any of these descriptors; instead he defines himself solely as a writer, eroding his private identity into malleable and publicly-gratifying story.

Though Rodriguez writes about his love for the “intense feeling of being at home,” and the intimacy of “spanish sounds” that he associates with his private life, he never defines himself (by claiming “I am…” or “I was…”) through his familial relationships or Mexican heritage (31). His parents proudly proclaim “We are Mexicans” and encourage their children to do the same, but Rodriguez still sees this as “their ancestry”(128). In fact, the first time he gives himself an identifier it is not to claim his race, religion, or familial relationship, but to say “I was a scholarship boy” (53). His intimate-familial self, then, seems simply like a precursor to his scholarly identity, an eventual component of his writing, the backstory to his public persona as a student and writer. (The book is, after all, titled The Education of Richard Rodriguez, not the life.) The only instance Rodriguez defines himself in the present tense, he declares, “I am a writer” (11). This metafictional, progressive identity allows him to include his intimate spanish-speaking self in his story, without being limited by its identifiers. However, his ultimate “writer” identity exists within the realm of the public, washing even his private experiences of their intimacy.

Rodriguez furthers this separation of his private-language from his identity by italicizing the memoir’s spanish words and using them apophatically. Having grown up in a spanish-speaking household, these words are inevitably part of his story, but he isolates them with italics — stark on the page rather than woven into his writing (the primary component of his identity). He continues this theme by using the spanish words apophatically, to describe things he is not. Not a bracero, negrito, or gringo, Rodriguez’s association of the spanish language to a lack of identity demonstrates his ultimate alienation from the private realm of his life. Furthermore, Rodriguez never uses the spanish words in quotations, as recollections of actual words spoken by family. Instead, he includes them in his reflection, making them seem simply like pieces of his written identity rather than actual experience. Moreover, even when he describes, in tones of enchantment, the intimate “spanish sounds” indicative of former family closeness, he still treats the words (and his loss of them) as undercurrents of a public educational journey, components of a political argument against bilingual education (21).

Furthermore, the very fact that Rodriguez writes this memoir makes him a writer and his private life a story, an entity for public consumption. Rodriguez himself declares early on, “I write: I am a writer” (11). Breaking the fourth wall and metafictionally bringing the act of writing to the forefront, Rodriguez reminds his audience that, though they can wonder about his public and private identities, they are reading his story because he has written it for the public– making his identity and his experiences ultimately public as well. Rodriguez reiterates this point in his narrative as he describes his mother “pleading with [him] never again to write about our family life” because it is “private”(195). By publishing his work at all, Rodriguez has chosen the public over the private. Even if he had dedicated the entire memoir to his intimate, familial life, the fact that he had written it at all would introduce an inescapable element of the public.

Though Rodriguez ebbs and flows between public and private, confounds categories of racial identity, class, and masculinity, and works constantly to complicate his identity, one thing remains clear: he is a writer. And he writes his own identity in a desperate attempt to find it and to share it. His memoir (though deliberate and careful in its word choice), then becomes a stream-of-consciousness progression of identity, rather than a retrospective reflexion. Ultimately, Rodriguez changes, but never really evolves, forever submerged in a mess of slipstreams and undertows, pulling him in every direction.

Hunger of Memory: Is There Such a Thing As Private Life?. (2019, Aug 19). Retrieved from https://studymoose.com/hunger-of-memory-is-there-such-a-thing-as-private-life-essay 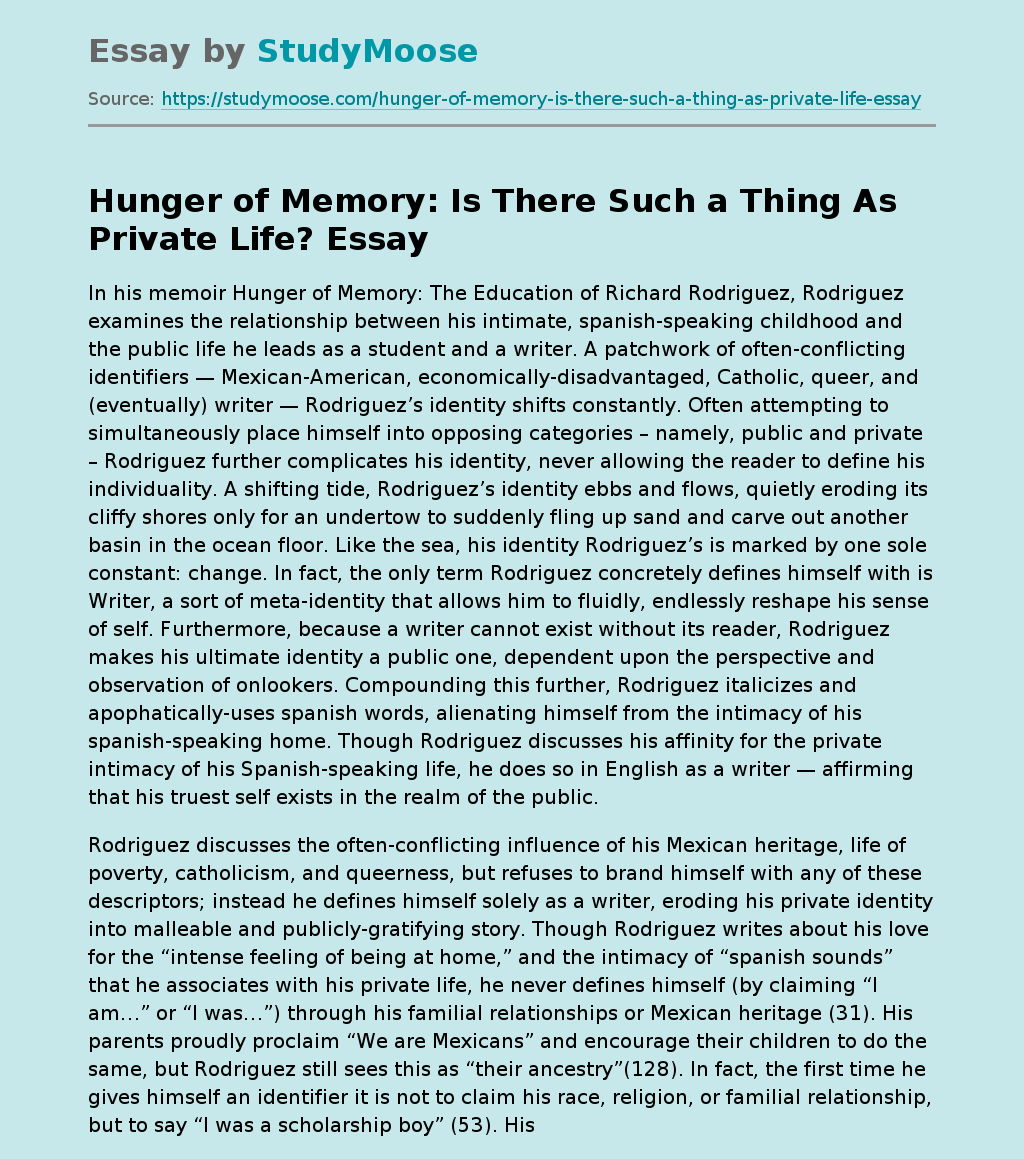