A Sensible Man with Sensible Writing “The Sensible Thing,” by F. Scott Fitzgerald shares numerous characteristics with his other writings. Like many writers, his work was heavily influenced by his life. Published criticisms note similarities between attitudes of the Roaring Twenties. In order to interpret “The Sensible Thing,” it is necessary to examine F. Scott Fitzgerald’s life and work.

The materialistic, free-thinking ideas characterizing greatly influenced the writings of F. Scott Fitzgerald. Furthermore, his relationship with Zelda Sayer, like a roller coaster, went through many ups and downs, and this continued throughout his life.

Turn in your highest-quality paper
Get a qualified writer to help you with
“ “The Sensible Thing” by F. Scott Fitzgerald ”
Get high-quality paper
NEW! AI matching with writers

After “a courtship of a year and a half,” (Bloom 83) Fitzgerald finally thought he made “the fortune that would convince the girl” to marry him (84). Only upon the publication of his first novel did Zelda promise a wedding because she wanted financial stability. According to tradition, when a couple marry, they become one. It is understandable that during Zelda’s “gradual deterioration from schizophrenia and eventual breakdown,” (Votteler 6:44) her spiral downward dragged Fitzgerald down as well (Bloom 85).

Attempting to cope with her schizophrenia, Fitzgerald traveled frequently to be near his wife. Drawing from his experiences of traveling around the world, he created the settings for many stories (Troskey 4:143).

Moreover, during this era, society’s conception of good and bad mattered greatly. The Fitzgeralds were “eager to participate in the moneyed society around them,” and they both believed “the purpose of money was to realize the promises of life” (Bloom 84). For many of that time, including the Fitzgeralds, money and popularity were priorities because these people were of shallow and vain character.

Finally, the lifestyles of the Fitzgeralds, attending lavish parties and socializing with the wealthy appeared as common subject matter in his stories. Believing that Fitzgerald, participating in these social functions would enhance his career as a writer by becoming well-known in the wealthy society, he and Zelda aspired to be accepted as equals of the rich “flappers” (Bruccoli 147).

Emphasizing the contrasts between metropolitan qualities and rural innocence characterizes the criticism of setting in Fitzgerald’s writings. Robert Roulston considers that throughout the works of Fitzgerald, two discreet attitudes are expressed toward the South. In “The Last of the Belles,” glamour and romance described the South, in contrast to the poverty and failure of the South in The Last Tycoon. Likewise East and West Egg, in The Great Gatsby, are characterized in terms of the rich side of town and the poor side of town (Bloom 158). Frederick J. Hoffman believed it was important for Nick Carraway, in The Great Gatsby, to be from the Midwest, “both the geographical and moral Midwest” (Poupard 14:152).

Carraway’s reactions to what he observes of Gatsby’s life are affected by wholesome and humble Midwest values of his youth. Indeed, as the distinct attitudes toward the South noted by Roulston, the Midwestern values contrast with the wild, immoral parties of Gatsby. Finally, Fitzgerald often used the Midwest setting to symbolize a certain innocence and return to a person’s roots. Similarly, Robert Ornstein suggests that Fitzgerald wrote about the concept of coming back to the home place after an adventure into town. “After Gatsby’s death, Nick prepares to return to his Minnesota home, a place of warmth and enduring stability, carrying with him a surrealistic night vision of the debauchery of East” (Bloom 78).

Critical analysis of the subject matter of Fitzgerald’s work focused on the theme of money, glamorous living, and beautiful women. Written “on the verge of fantasy,” Alfred Kazin considers Fitzgerald too obsessed with “the romance of glamour” (Poupard 14:151). That is, Fitzgerald’s writing demonstrates how highly valued wealthy social standing and material possessions were to society in general. Kazin further analyzes Fitzgerald’s “treatment of tragic complex topics in the context of romantic glamorous lives”, such as Jay Gatsby’s rise, dream, and physical downfall (Poupard 14:151). The “vanities add insecurities” of man from Robert Murray Davis’ view were often topics in Fitzgerald’s works.

Possessing too much or too little looks, money, and position” created situations bringing about the character’s problems (Hall 6:167). In The Great Gatsby, Jay Gatsby must overcome these factors in order to move on in life. As Marius Bewley believed, the American Dream, included wealth add happiness, and this was almost always a subject matter for Fitzgerald. “Scott Fitzgerald’s novels have been based on a concept of class” (Bloom 23). He knew that money played a tremendous role in all areas of life, and he believes happiness cannot exist without money. Bewley, citing Fitzgerald’s recognition that money burs the happiness of wealth, calls Fitzgerald the “first American writer to discover that such a thing as American class really existed” (24).

Throughout Fitzgerald’s novels and short stories, a familiar theme appears which is using money and success to regain happiness or lost love. As Alfred Kazin notes, Fitzgerald’s main characters repeatedly attempted to buy happiness. From The Great Gatsby, Jay Gatsby “merely wanted to buy back the happiness he had lost-Daisy, now the rich man’s wife-when he had gone away to war” (Poupard 14″151). Always throwing parties, Gatsby continuously was “reaching out to make out of glamour what he had lost by cruelty of chance” (14:152). The inability to recapture the past is Tom Burnam’s interpretation of the theme for The Great Gatsby. The green light at the end of Daisy’s dock represents the signal to attempt to salvage what has already been lost (14:153).

Until the very end of his life, Jay Gatsby tried to win Daisy back from her husband Tom, but she did not succeed. Similarly, Roy R. Male concludes that “Babylon Revisited” reflects Fitzgerald’s belief that a wealthy lifestyle was desirable. In the end, Charlie, the protagonist, regrets choices made in living life in high style; for example, a stop in the Ritz Bar, which led to losing his daughter (Bloom 94). Nevertheless, even though Charlie intends to win his daughter back, he fails to do so, and he is forced to live with this for the rest of his life (96).

Similar to The Great Gatsby and Fitzgerald’s own life, “The Sensible Thing” is a bittersweet love story of two realistic characters of the Roaring Twenties. George O’Kelley, a graduate from the Massachusetts Institute of Technology, was presently working as an insurance clerk. As a man “new to poverty,” (Bruccoli 191) O’Kelley loses the love of his life, Jonquil Cary because he is too poor to marry her, and this would be putting too much stress on her love for him. (Bruccoli 290) Instead, a year later, he returns with money and a promising future, hoping to recapture his lost love now that he is more suitable for her because they had done “the sensible thing”. Though the circumstances for marriage to Jonquil were finally acceptable, the emotional circumstances were no longer right. “He had traded his first youth for strength and carved success out of despair. But with his youth, life had carried away the freshness of his love” (Bruccoli 191). “There are all kinds of love in the world, but never the same love twice” (Bruccoli 301).

The Fitzgeralds’ life and George and Jonquil’s life process a countless number of similarities. With Zelda’s frame of mind on how much money Fitzgerald would be raking in on his short stories and novels, she was to be won over by his checkbook (Martine 86:92). When George was working as an insurance clerk, he was not making enough money to be suitable for Jonquil to marry, and therefore, money was for certain an issue among the two couples for stirring trouble. Considering both love stories occurred during the same time period, their downfalls were found to be related to one another.

The Fitzgeralds’ relationship, which ended in divorce, a fact which was kept secret due to society’s general disapproval of divorce, shared similarities with Jonquil’s rejection of George’s proposal because he had a lower social standing. Sacrificing money and time are what Fitzgerald and George did for their women. When Zelda became mentally ill, Fitzgerald traveled constantly to be at her side and sustain his career as a writer. Similarly, George quit his job as an insurance clerk to be with the woman he loved at the time, and he also moved away to become successful and more suitable for her.

Similar to The Great Gatsby, “The Sensible Thing” also consisted of two extremely contrasting settings. New York City and Tennessee of “The Sensible Thing”portrayed the East and West Egg of The Great Gatsby in that New York City was lavishing and captivating, while Tennessee represented mediocrity and dullness. From “The Sensible Thing,” the subject matter was centered on a girl, as all Fitzgerald stories are. Because she was the love of his life George O’Kelley did everything centered around Jonquil Cary. George’s rise, dream, and downfall were concerned with how Jonquil was in his life because she affected the way George lived and reacted. Therefore, she was the center of attention in this story. Idolizing wealth is a clearly seen theme throughout “The Sensible Thing.” In particular, George’s lower social status caused Jonquil’s shallowness to be brought out, and she would not marry him until he became financially stable because she felt it was not “the sensible thing” (Bruccoli 191).

In conclusion, it is obvious that Fitzgerald identified wealthy living as desirable, but he also examined issues of regaining lost loves and lost opportunities. In “The Sensible Thing,” as well as other Fitzgerald works, the idea of wealth, social status, and love played a major part in the theme, setting, and subject matter. Fitzgerald’s personal life is filled with many examples of these concepts. This examination of the life and works of Fitzgerald clearly shows these elements in “The Sensible Thing.” 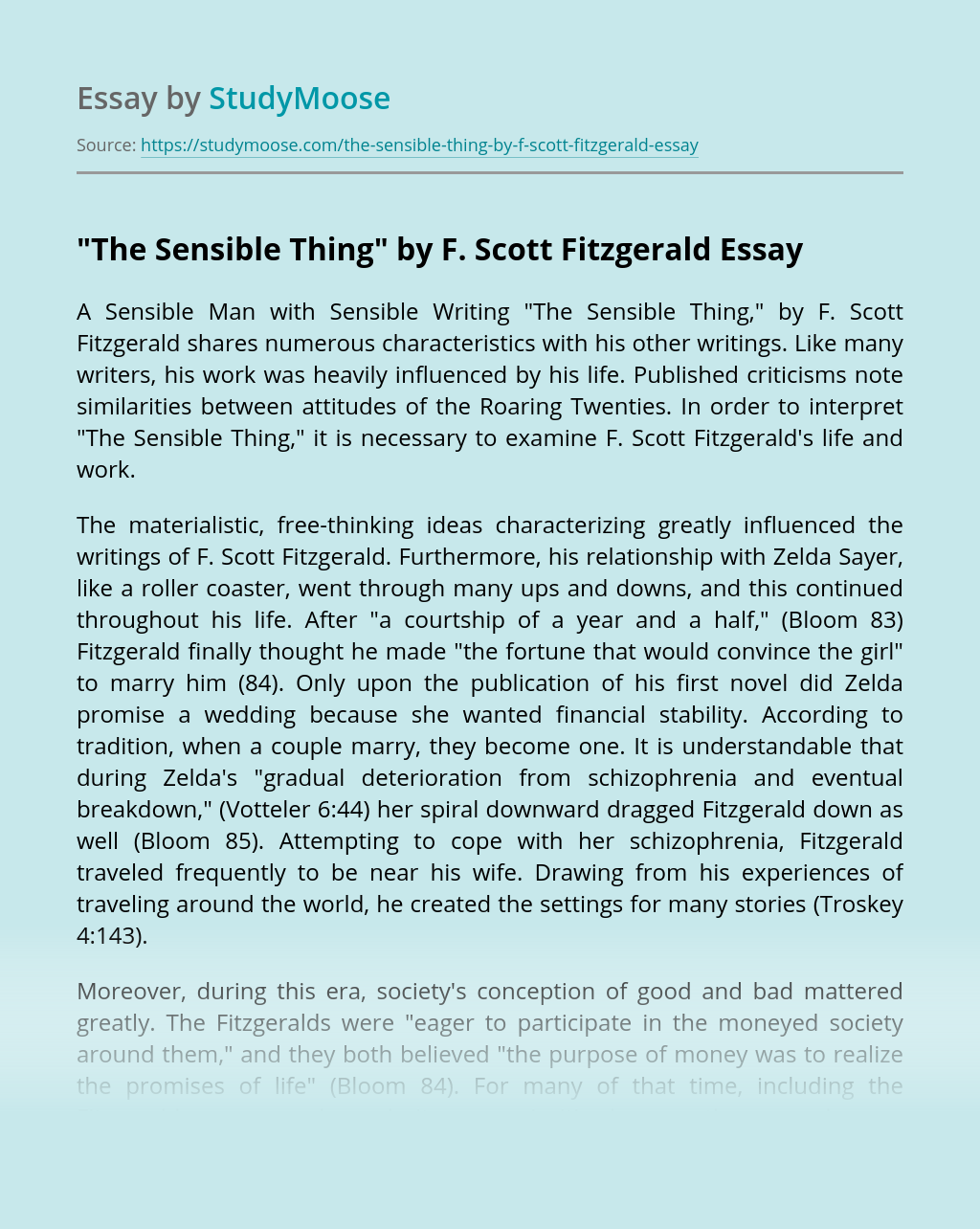 Turn in your highest-quality paper
Get a qualified writer to help you with
“ “The Sensible Thing” by F. Scott Fitzgerald ”
Get high-quality paper
Helping students since 2015
Stay Safe, Stay Original