Human Nature in "The Lord of the Flies" by William Golding

“Everyone is born evil, and to keep people civilized, we need government and laws” (golding). Golding’s views on human nature is that everyone is born evil there are no people that are truly good. Golding brought this out to light when he published the novel The Lord of the Flies which embodies Golding’s beliefs. The allegorical meaning behind the The Lord of the Flies reveals that William Golding believes mankind needs rules and authority in order to stay civil or else people will revert to savagery.

Don't use plagiarized sources. Get your custom essay on
“ Human Nature in “The Lord of the Flies” by William Golding ”
Get custom paper
NEW! smart matching with writer

The characters Ralph and Jack immediately proclaim that there needs to be a person in authority. In this case, it is a chief who will lead the other boys on the island since there were no adults. Both Jack and Ralph want to be chief. Jack does not agree with the rules that Ralph has made as chief. He wants to have his own tribe to let the boys be free of those regulations.

As is mentioned in the text, “Who’ll join my tribe and have fun” (Golding 150). Savagery may also be shown when they do not agree with the person in authority. Obeying the rules keeps everyone in a civilization civilized, and the lack of compliance manifests into an act of savagery.

On the topic of savagery, bullying is the use of harassment, force, or threat, to abuse and intimidate. One of the characters from The Lord of the Flies that has savagery running through their veins is Jack Merridew. Golding’s use of bullying in the novel reveals a part of his childhood in which he bullied others: “I enjoyed hurting people.

”(Golding). His experience with bullying is revealed through the character Jack who is someone who bullied Piggy, “You’re talking too much” said Jack Merridew “Shut up fatty” (Golding 21). Jack represents the id psyche. The id does not change with time or experience, it behaves within the unconscious part of the mind. Jack remains a static character throughout the whole novel, bullying and wanting to kill. Bullying and savagery correlate to where someone that bullies others, can more than likely be a savage.

As Golding mentions civility keeps naturally evil people from becoming a catastrophe. Once the boys are on the island they try to conserve society. Ralph and Piggy find a conch that they used to keep everyone on the island under control. The conch embodies order and power. Once the conch breaks, it is a symbol of how the boys have lost the organized leadership they had at the beginning. Once this has happens Roger, who is apart of the tribe of savages, throws rocks which breaks the conch and kills Piggy. “The rock struck Piggy a glancing blow from chin to knee the conch exploded into a thousand white fragments and ceased to exist. Piggy, saying nothing, with no time for even a grunt, traveled through the air sideways from the rock… fell forty feet and landed on his back across the square red rock in the sea”(Golding 181). Jack says that that is what they get for interfering with his tribe. This portrays that these boys have no shame in their animalistic behavior. The scarcity of rules is an accessible way for people to revert to their inheritance of savagery.

The symbolic meaning behind The Lord of the Flies concedes that the author William Golding believes humanity needs authorization in order to stay civil or else people will return to their inheritance of savagery. Savagery can be presented when they do not agree with the person in authority. Being loyal to the authority keeps everyone in a civilization humane, and the absence of conformity demonstrates savagery. Bullying and savagery relate mutually so someone that bullies others, can have the mentality of a savage serving as the id psyche. The lack of rules being imposed is a way for people to turn back to savagery making it unrestricted. People are evil by nature and are moved by primitive impulse toward brutality and dominance over others, strictly speaking, humankind are savages.

Human Nature in "The Lord of the Flies" by William Golding. (2021, Feb 04). Retrieved from https://studymoose.com/human-nature-in-the-lord-of-the-flies-by-william-golding-essay 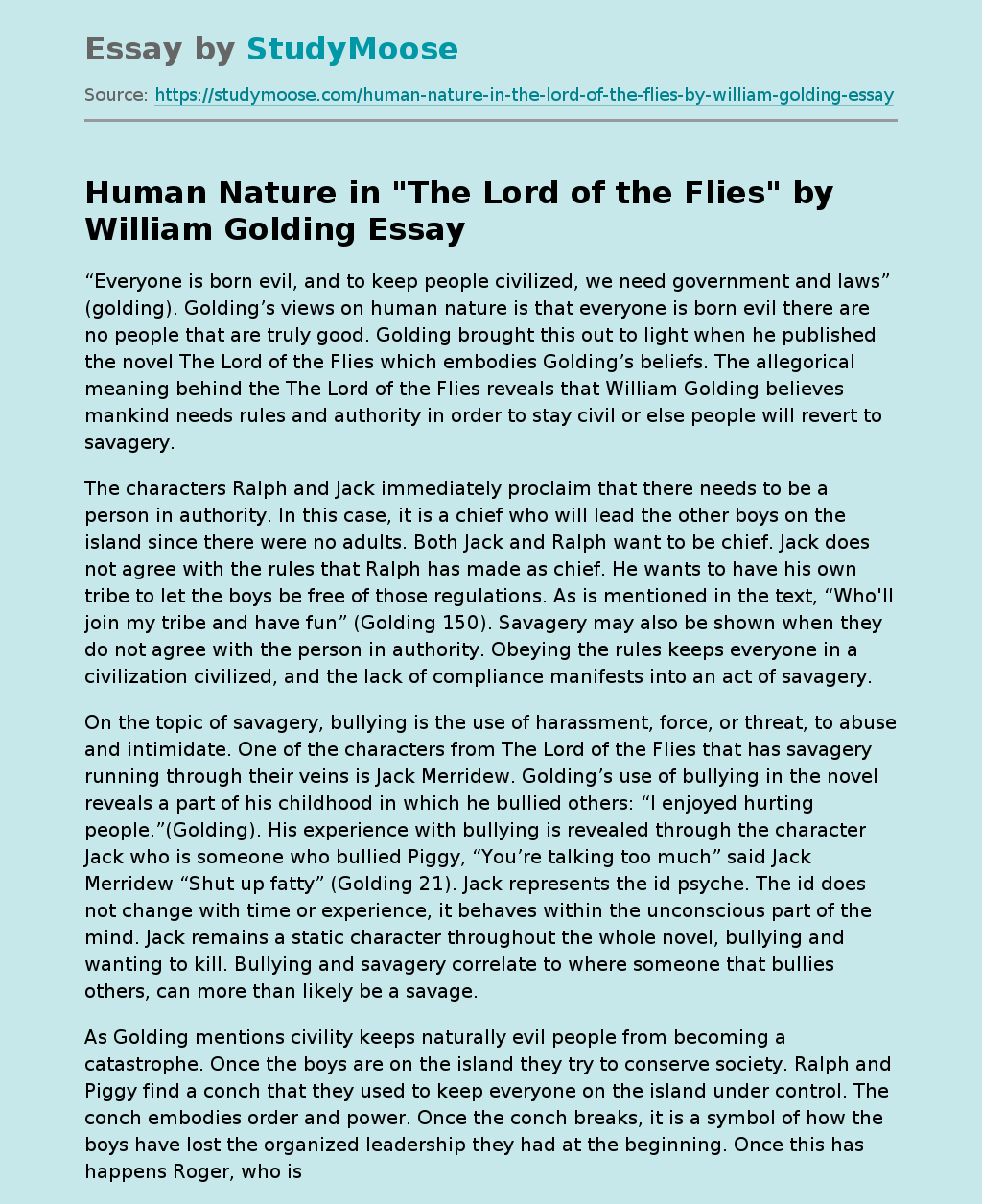