Human nature as reflected in Macbeth

Human nature has sparked much debate throughout history. Some people think that human nature at birth is absolutely good and that all evil comes from postnatal education or the negative effects of parental or guardian interaction. This idea is evident in a Chinese saying which translates as “Men at their birth are naturally good.” Conversely some people argue that human nature is initially evil, and provide an example by citing the observation that when a person is very young, he or she always and only asks for food and is indifferent to the feelings of others.

Don't use plagiarized sources. Get your custom essay on
“ Human nature as reflected in Macbeth ”
Get custom paper
NEW! smart matching with writer

Such a view interprets this phenomenon to indicate that human nature is originally selfish. It seems clear that Shakespeare may have favored the second perspective because in Macbeth it clearly shows that human nature is selfish, and even though postnatal education can change a human’s mind, it can only reduce or hide his or her selfish nature to some extent, and in addition, the selfish nature will most likely be present when it is activated or spurred by certain circumstances.

My idea about human nature is reflected in Shakespeare’s character, Macbeth, who initially is a loyal general to his king, Duncan, and valiantly protects his king and country also showing nobility and little indication of his darker side. In Act 1 Scene 2, it is clear that Macbeth was a brave soldier who ignored the danger he was in, “[f]or brave Macbeth disdaining Fortune, with his brandished steel, which smoked with bloody execution, like valour’s minion, carved out his passage till he faced” the rebel leader.

Macbeth’s heroic deed demonstrates that he was loyal to his country and the king who calls him a “peerless kinsman” and appears to trust Macbeth. However, after meeting three witches, Macbeth thinks of murdering Duncan although he wonders to himself why he has murderous thoughts.

Despite his earlier surprise about his thoughts when he is told by the witches that he will become king Macbeth, prompted by his wife’s encouragement and also her disdain at what she calls his cowardice, his “brain sickliness” when he further hesitates decide to murder Duncan. On second thoughts he again hesitates and almost convinces himself that he should not murder the king with various reasons: one of them was that Macbeth was Duncan’s kinsman and also his subject, so Macbeth should always try to protect the king as he states: “First, as I am his kinsman and his subject, Strong both against the deed”.(Act 1 Sc, 7)

Before Macbeth’s desire of pursuing kingship became uncontrollable, Macbeth was still trying to restrain himself from committing the deed and decides to remain loyal stating that his only reason to kill Duncan was to fulfill his ambition. Shakespeare does not tell audiences where Macbeth’s loyalty originated. However, in Act 1 Scene 6, Macbeth constantly expresses his gratitude to Duncan which indicates his appreciation for the new title of Thane of Cawdor which the king gave him, and the honour he attained when Duncan came to his castle. It is evident that even though these expressions were Macbeth’s mask to hide his real plan, Macbeth still hesitated before he did the murder. It represents that he was somewhat reluctant to kill the king and his loyalty was from a profound sense of responsibility.

However, the presence of three witches and their predictions spurred his selfish nature along with the criticism of his wife three witches said that Macbeth would be Thane of Glamis, Thane of Cawdor, and king step by step. In Act 1 Scene 3, right after the first two predictions really came true, Macbeth stated to himself, “If good, why do I yield to that suggestion whose horrid image doth unfix my hair and make my seated heart knock at my ribs, against the use of nature?” This quotation illustrates that the murder plan of Duncan had already settled in Macbeth’s brain. He did not do the murder immediately because he still needed a further spur to make him put his plans into actions.

When Lady Macbeth persuaded Macbeth to kill the king, Macbeth could not resist the desire to pursue the kingship and the great power he would like to get; as a result. Macbeth killed the king and obtained the kingship. For convincing Macbeth, Lady Macbeth mainly used pathos to spark Macbeth’s self-esteem, his confidence and his anger. First of all, she stated that if Macbeth did not dare to do the murder, he was an animal but not a man. She also said that when Macbeth dared to do it, he was a man; if he went one step further by doing what he dared to do before, he would be much more than a man; “What beast was ’t, then, that made you break this enterprise to me?

When you durst do it, then you were a man; and to be more than what you were, you would be so much more the man.” These words really made Macbeth feel shame, and anger, and also the desire to show himself that he was a real man was prompted by his self-seeking, egotistical selfish nature. Without human logic, people, including Macbeth, find it much easier to do some irrational things such as murder. Secondly, Macbeth did have the desire to be king, but he still worried about his future life after the murder even when his desires were fulfilled. Lady Macbeth told her husband that the murder would not be a failure if he dared to do it commenting “We fail? But screw your courage to the sticking-place, and we’ll not fail.” This was a guarantee of success for Macbeth; it actually reduced Macbeth’s concern about his future life after the murder.

Lady Macbeth’s persuasive words are considered the circumstance that activated the selfish and evil part in Macbeth’s mind. At this moment, Macbeth really changed his mind and the evil part in his brain arose indeed. In the “dagger soliloquy”, Macbeth saw a dagger, which was leading him towards Duncan’s bedroom in front of him. He said “Come, let me clutch thee. I have thee not, and yet I see thee still”; this part does tell the audience that Macbeth was not one hundred percent ready to kill but his mind had already encompassed the deed. At the end of this scene, Macbeth finally “screwed his courage to the sticking point” and decided to do the murder as he stated to himself “I go, and it is done.

The bell invites me. Hear it not Duncan, for it is a knell that summons thee to heaven or the hell.” In Macbeth’s’ mind, to contest the kingship was more important than anything else at this moment. His selfish nature was adequately exposed by his murder plan for Duncan; however, it was only the first step because to sustain his rule, he was going to kill other people even though they were his friends since he was so strongly self-seeking became evil enough to murder anyone who stood in his was..

After Macbeth acknowledged that his own children would not be the king, but instead, Banquo’s descendants would become kings, this issue became the most critical one in his brain. Thus, instead of being merciful to his old friend, Macbeth commanded three murderers to kill Banquo and Banquo’s son, Fleance, as they returned to the castle. As a result, three murderers killed Banquo, but Fleance escaped. This foul and tragic deed seemed very useful  for Macbeth to sustain his rule over Scotland. In the meantime, Macbeth’s selfish nature was clearly evident and he believed the witches prophecy that no one could kill him who “was of woman born” which made him confident he could stay in control.

His selfish, self–seeking nature was at a peak, and he even seemed indifferent to his wife’s death. However, things will develop to the opposite side when it becomes extreme. In Act 3 Scene 4, Macbeth started to see hallucinations of Banquo during the feast, which refers that Macbeth was threatened by his own deed that made him feel guilty and upset. Later on, at the end of this play, Lady Macbeth also became crazy because the people saw that she sleepwalked with a candle and viewed all the bad deeds she had done. Thus, it is clear that when a person has extreme and uncontrollable selfishness, it also brings more or less disasters to himself.

In conclusion, Macbeth’s changing process sufficiently proves that human nature is selfish and sometimes evil; it can only hide in human’s mind but can never be wholly eliminated. In addition, in some circumstances, this kind of selfish nature can be recalled and create some terrible results. Evolutionary theory indicates that we have originated from primitive organisms that also produced dinosaurs and crocodiles. As the offspring of such bloody forebears, we have their genes and our bloody nature is even beyond theirs. Macbeth’s greedy and selfish nature was activated by his wife and the witches; then he created catastrophe to others and also to himself. As wise animals, we should restrict our selfish nature and control ourselves; otherwise, we will continue to create tragedies of death and destruction to satisfy ourselves.

Human nature as reflected in Macbeth. (2016, May 14). Retrieved from https://studymoose.com/human-nature-as-reflected-in-macbeth-essay 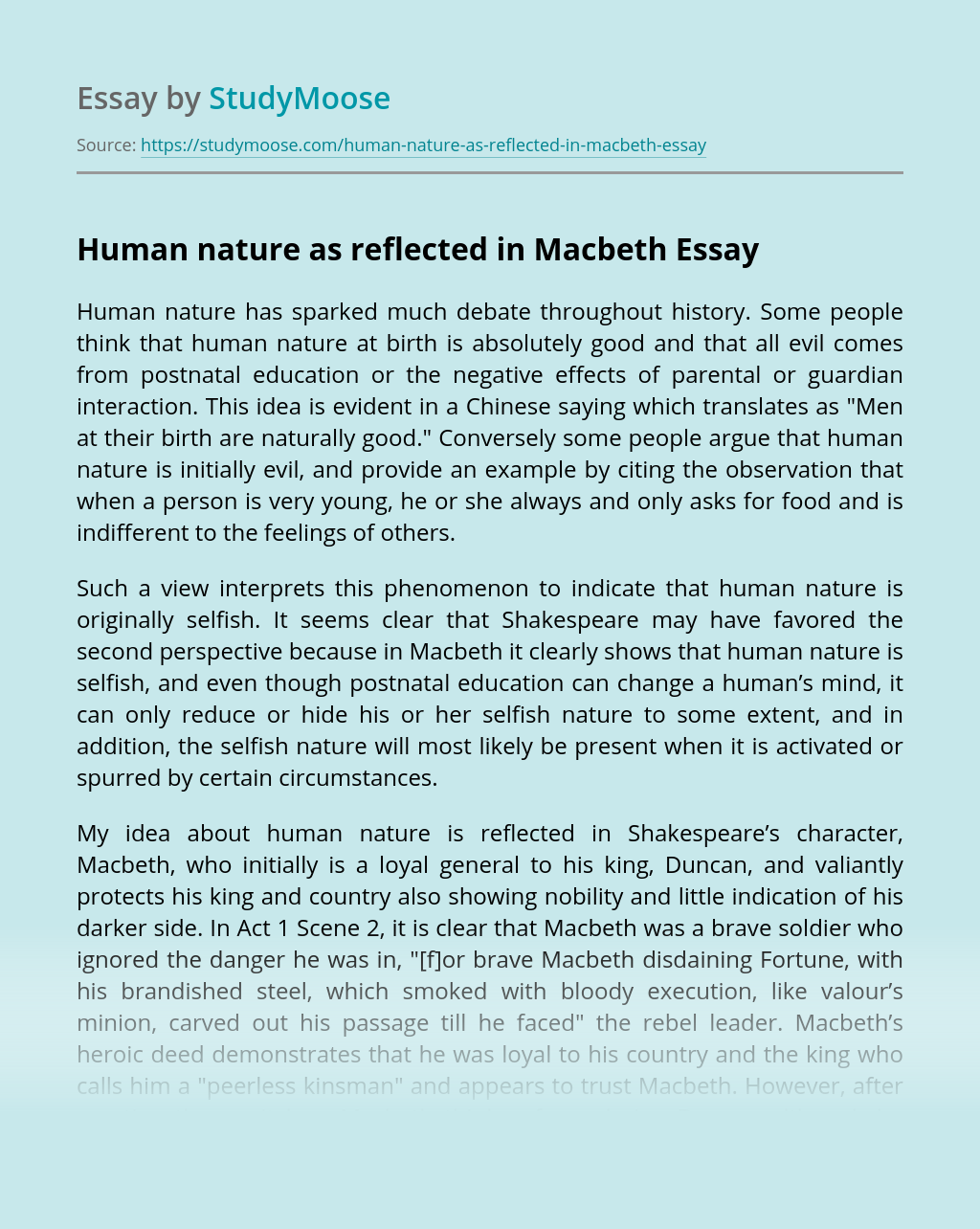