Hailed as Plato’s greatest masterpiece, the Republic is considered one of the best guides of ethics and politics not only in a5th century Greece but in modern and contemporary times. Just like in the Dialogues, throughout all the sections or books of the Republic, the main character is Plato’s mentor, Socrates, whose conversations with prominent Greek personalities on the subjects of ethics and politics the former documents. Book One is particularly important as it opens the series of dialogues that discusses ideas relevant to human nature and the definition of a good man.

Don't use plagiarized sources. Get your custom essay on
“ Human Nature and the Goodness of a Person in Plato’s Republic I ”
Get custom paper
NEW! smart matching with writer

This paper seeks to present the views of Plato on the subjects of wealth, friendship and justice as it relates to the idea of what a good man should be. The Important Points of Republic I on Human Nature The ideas on human nature and goodness in Book One of the Republic are hinged upon the important points in the conversations among Socrates, Cephalus, Polemarchus and Thrasymachus.

On Wealth. Socrates talks to Cephalus in the first part of the first book of the Republic. Socrates is curious about Cephalus’ mild demeanor when it comes to his wealth.

First of all, Socrates states that in order for one to value money, he has to make it himself. He speaks of this important concept in the following statement of his to Cephalus: “Men who have made money take this money seriously as their own creation and they also value it for its uses as other people do” (Plato, Republic I, 330c).

Socrates points out further that “those who have themselves acquired [their money] have a double reason in comparison with other men for loving it” (330c) and “so [the men who have made money] are hard to talk to since they are unwilling to commend anything except wealth” (330c).

In short, Cephalus states that “the best thing about wealth is that it can save us from being unjust and thus smooth the way for an agreeable afterlife” (Brown). This is clearly one of the best insights on human nature related to wealth. This line implies that a good man is supposed to make his own money in order for him to appreciate it much and to value it. Wasteful men who do not value their money may have been those who did not make their own money and have acquired it only through inheritance.

The second important point regarding how wealth relates to human nature is that a good man should know that the importance of money is for him not to cheat his fellowman. Socrates asks Cephalus “What do you regard as the greatest benefit you have enjoyed from the possession of property? ” (330d). And after a long explanation, Cephalus answers, “I affirm that the possession of wealth is of most value not to cheat any man [and] not remaining in debt to a god for some sacrifice or to a man for money [and] it has also many other uses” (331a-331b).

It is clear from a Cephalus’ statement that the purpose of money is not to do harm to one’s fellowman even though this harm is unintentional. He therefore presumes that a man who does not have enough money has a natural tendency to wrong his fellowman. It is therefore imperative that people should make money for such a purpose. On Friendship. From the subject of wealth as it relates to human nature, Socrates concludes that the purpose of acquiring wealth is somehow based on the idea of doing justice to one’s fellowman. And this idea of justice extends to friendship.

In the conversations between Socrates and Polemarchus, one of the conclusions they have arrived at is that it is but just for one to do good to his friends and not to do evil. This is explicitly stated by Polemarchus as: “Friends owe it to friends to do them some good and no evil” (332a). This is based on the saying according to Polemarchus that “according to Simonides, it is just to give to each what is owed [or due] to him” (Humphrey), which means that because your friends do good to you and not bad, then it is but just to return the favor.

Polemarchus also says that in order to do justice to one’s enemies, one should do to him “what also is proper for him [and] some evil” (332b). This means that since one’s enemies do bad things then one should give them a taste of their own medicine through doing bad things too. On Justice. Both the aforementioned subjects of wealth and friendship as they relate to human nature can be reduced to the idea of justice. The ideas on how justice relates to human nature are somehow lifted from the dialogue between Socrates and Thrasymachus.

A just man first of all should not try to take advantage of another man. Socrates asks Thrasymachus, “Do you think the just man would want to overreach or exceed another just man? ” (349b) and he answers, “By no means” (349b). This means that a just man recognizes the fact that since the other person has not wronged him, he has no right to wrong him either. However, Thrasymachus states that a just man would deem it proper and just to overreach an unjust man, although “[the just man] wouldn’t be able to” (349b).

This means that if someone wrongs a just man, he would think it is but just to retaliate, only that out of kindness he might not be able to do it. However, it is implied here by Thrasymachus that a just man may rejoice when the unjust are punished for the former thinks just punishment is well-deserved. However, it is believed that this provides “a contrast to the preciseness of Socrates’ claims” (Kanak).

Nevertheless the just man is still better than the unjust man, for “the just man does not seek to take advantage of his like but of his unlike, but the unjust man of both. (349c-349d) From the aforementioned statements, it has been concluded that “the just man is like the wise and good, and the unjust is like the bad and the ignoramus” (350c). The “wise and good” man, or the “just” man, according to the Republic, is not really someone who accepts all ridicule and unjust treatment without question. He is rather someone who treats in a good way those who do good to him and may choose to treat in a similar way those who do bad things to him.

This is basically the idea of a just and good man based on the first book of the Republic. Conclusion The good man according to Book One of the Republic is the man who is just. Specifically, he is a firstly a man who makes his own wealth in order that he may appreciate it. He is also one who “recognizes that the importance of money is for one to be able to treat his fellowman justly and to avoid causing any unjust treatment” (Kozlovic). Moreover, a good man is one who gives to his friend what is due him and to his enemy some evil that he rightfully deserves.

Lastly and most importantly, a good man is a man who does to others what others do to him, whether this is good or bad, although out of kindness he may choose not to do something bad. Nevertheless, a good man believes that a just punishment should serve its necessary purpose. We therefore learn so much from the words of Cephalus: “When a man lives out his days in justice and piety, sweet companion [is] with him, to cheer his heart and nurse his old age. ” (331a)

Human Nature and the Goodness of a Person in Plato’s Republic I. (2016, Sep 23). Retrieved from https://studymoose.com/human-nature-and-the-goodness-of-a-person-in-platos-republic-i-essay 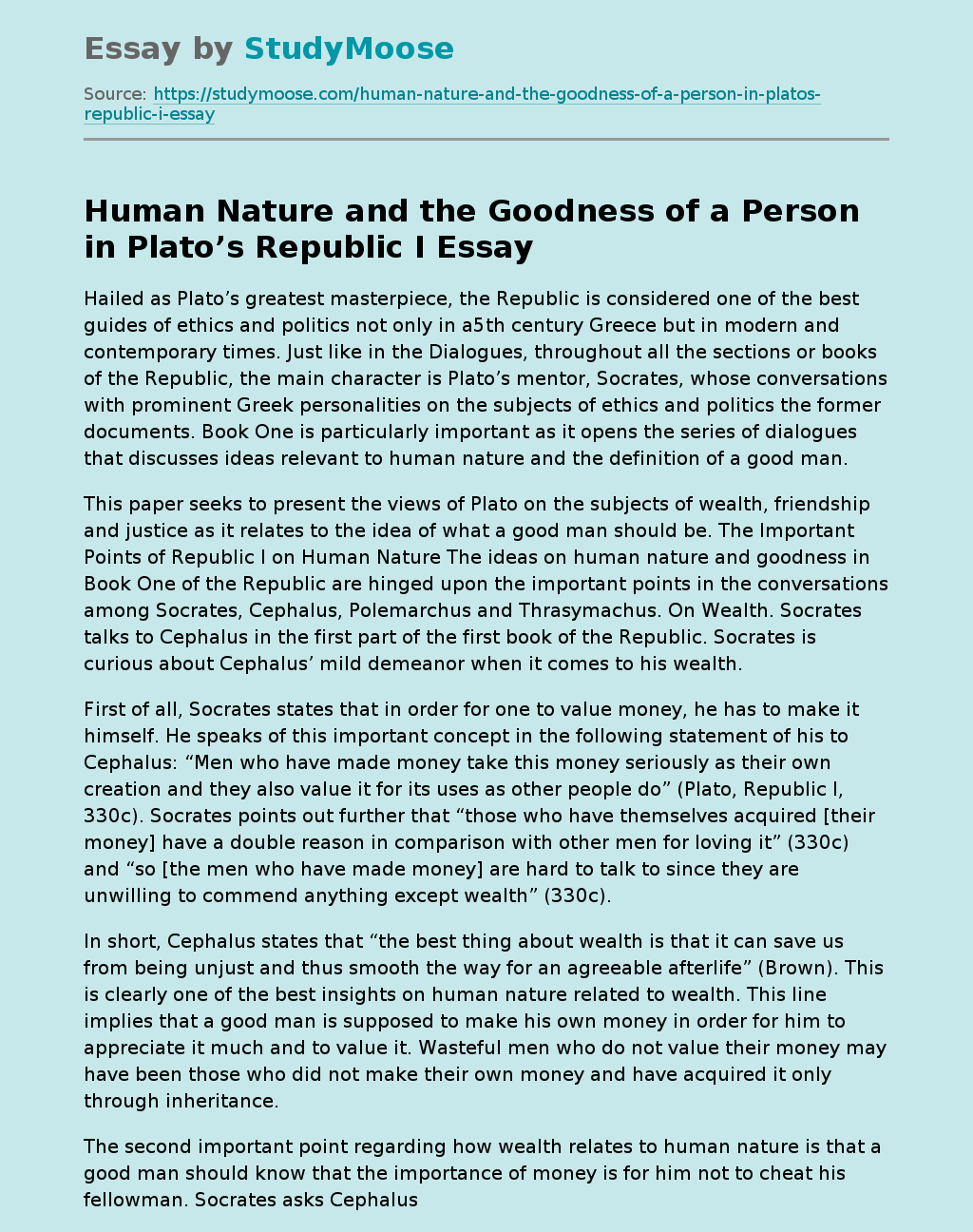