The Human Computer Interaction(HCI) is the field of study of mutual communication between the user and the computer. This is the field of interaction is equipped by using the user interface which includes the software as well as the hardware too. All the software which are being made are enabled with user interface design and their implementation. Today, Microsoft Windows XP, Microsoft Windows 98 etc. are the operating systems which are enabled with graphical user interface. This is also the human computer interaction.

The new interface design like touch-screen designing of computers and mobiles also has given a new direction to HCI. The HCI in future has better opportunities with the developing software and hardware. 2) Methodologies and processes for designing interfaces: the HCI design methodologies are developed from early methods like treated users’ cognitive processes to the new ones like web designing. The methods for designing the HCI always looks for interaction between the user, computer that is the machine and the designers.

User centered design is also the method in which every aspects like requirements, design etc.

are included in which the attention is being paid on cognitive factors. in this design processes the users use through the hyperlink with a very high speed. These models as the name denotes are based on the models which are based on human expectations. The model can be integrated by programming and then can be implemented and then the feedbacks can be undertaken for modifications.

(HUMAN COMPUTER INTERACTION p. 1) Paper prototyping is also a method for designing HCI by developing software. It is used for examining and scheming user interface. In this method the drawings of the interfaces are created for design. Its is a useful method as the sketching is faster than the programming. This method can be useful as the persons who do not the programming can also do this. Web design is also a method of designing user interface like web pages, websites etc.

using HTML, JAVA as the software toolkits for development of web pages. The web design is used to made websites as graphical user interface(GUI). The web design also implemented to meet the requirement of the website developer as well as the end-user. The web design is based on languages like JAVA, HTML for safety purposes to eliminate the problem like hacking etc. Cognitive method of HCI designing is a earlier method but still its very constructive.

It is based on analysis of two aspects cognitive exchanges with computers like learning, reading and other aspect is cognitive stuffing, composition etc. In this process the user analysis is done firstly like requirements, tasks etc. This analysis contains the features like memory, perception, requirements etc. The next step is designing and analytical test. This contain the features like language and memory. The last phase is system testing to test the authentication of the system.

(Douglas J. Gillan & Nancy J. Cooke p. 1) 3) Methods for implementing interfaces: There are many methods of implementing the interfaces like software, research methods, efficient algorithms etc. There are many software tools like windowing systems, toolkits, interface builders etc. These software includes the software like JAVA, Macintosh Toolbox, Visual Basic etc. These software are very beneficial as they have application in HCI designing as well as in other fields also.

5) Developing new interfaces and interaction techniques: The new interfaces which are being designed for the future must includes many features like management and filtering of data, input devices and sensors, learn ability, user satisfaction etc. The Augmented Reality(AR) design is a latest one. This design is oriented from the Virtual Reality(VR) design. These design are implemented to reduce the cognitive overhead. ( Andreas D? nser, Raphael Grasset, Hartmut Seichter, Mark Billinghurst pp1-5)

There are many principles which are being undertaken like affordance, user satisfaction, low physical effort, learn ability, flexibility etc. There might be a switching from 2D to 3D visualization. The HCI may be designed by touch-screen application. The models which are being designed must correlate according to the needs, task, goals of the user. The 2D screen desktop may be given a new look by 3D view. The HCI may be developed such that they might be connected to mobile and when a e-mail, message etc.

come then the user interface attach directly connect with the processor and the communication system and will inform the user directly. One technique may be used by using sensors. When the user wants to switch on the computer or want to give any instruction. Then the sensor which are employed just start their working and obey the order of user. The HCI must respond to the user’s instruction quickly. The problem of slow response must be eliminated in order to make new interface more efficient.

The error must be eliminated or must be decreased to a zero level. The interface must have the tracking stability. The user-centered design must be improved to AR designs. The user intervention must be taken into account. 6) Developing descriptive and predictive models and theories of interaction: The models which are to be developed must be based on the many key factors like virtual and augmented reality, tangible user interface, affective computing, sensing interface eye moved based interface , perceptual interface etc.

The models are used to design and evaluate the interface technique The graphical user interfaces(GUI) are used today mainly. These interfaces will be modeled according to the needs of the user. The new models will used the basic qualities of the WIMP interface as well as they will work on new innovative techniques like using sensors, 3D environment. The HCI environment must be created such that the communication process must be strong.

( I. Scott MacKenzie, pp. 27-54 ) The models which are based on these models are also modified according to the new theories presented like the use of new methods like digital libraries. 7) Conclusion: The human computer interaction is very beneficial today as well as few decades ago when WIMP interfaces were in use. With the advent of new technologies and theories, the new HCI environments has been created and the development in the field of the HCI is going on like 2D to 3D environment on desktop.

These all development are due development of new software and techniques which are being used. The latest research strategies like Ethnography is also beneficial for the HCI development. The web application are being developed with the use of new methods. Thus the HCI environment has been developed a lot. 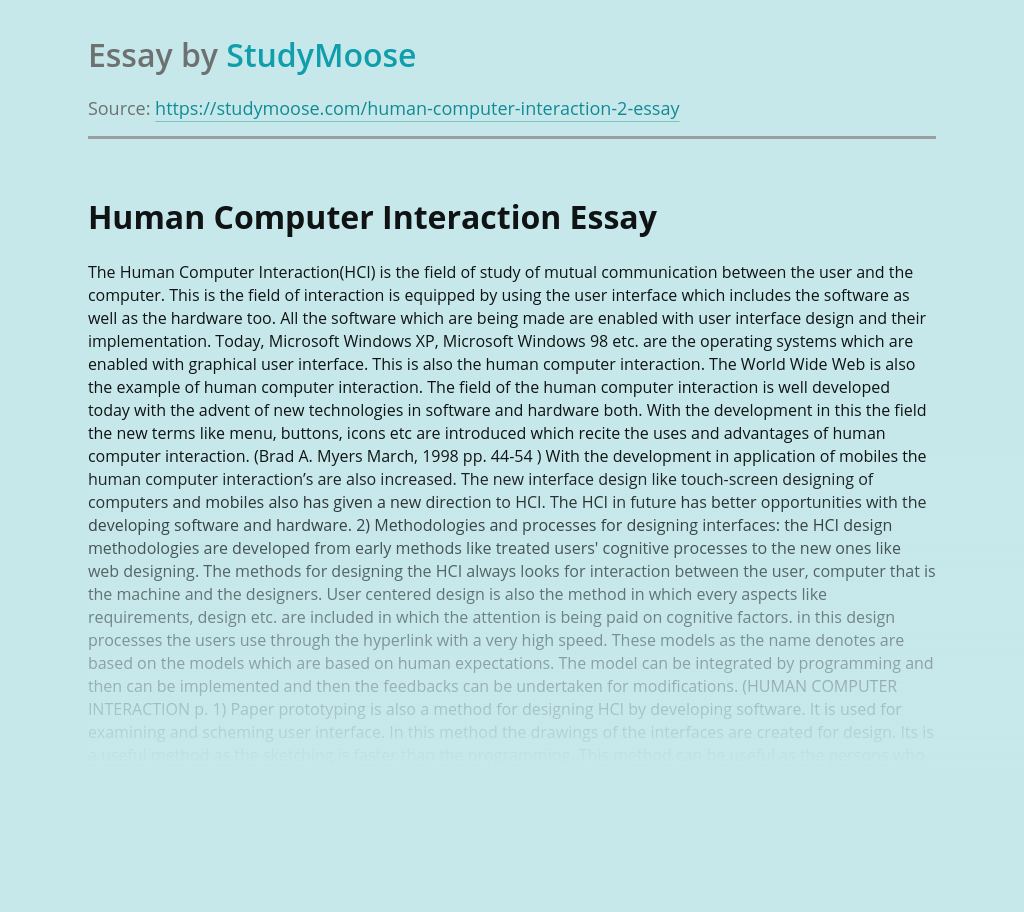