Humanity has come far from its primitive beginnings. From sticks and stone wheels to the fantastic technology of today. Each tool made toward the betterment of life more wondrous – and many times more dangerous – than the next. Humans have come from stone tools to hydrogen bombs. Humanity has become so accustomed to – so connected to — technology that it can no longer live without it. If all electricity were to somehow cease to be a thing in the world, society might very well collapse before our eyes.

Turn in your highest-quality paper
Get a qualified writer to help you with
“ Effect of Technology on Human Social Interaction ”
Get high-quality paper
NEW! AI matching with writer

Really, there is no stopping this evolution, whether humanity as a whole see error in technology or not. In “The Evolution of Technology,” George Basalla asks how the world came to such a point that it could not stop its advancement. I question its exact effects. The advancement of media technologies in the 21st century have greatly impacted society. More specifically, the merging of modern media technology and the various social settings of society has had major influence on social interaction between individuals.

The media technologies of today effect social interaction in many different ways.

Modern media technologies can encourage the interaction of many groups of people claiming different backgrounds, ethnicities, and generations. It can aid in bridging gaps both generational and cultural. To the contrary however, media technologies in any social setting can – according to the studies in “The Impact of New Media Technologies on Social Interaction in the Household” – easily result in a growing privatization in areas of life that, in an earlier, less technologically advanced time, would have been shared with friends and family.

Media technologies of today have changed much of life in the last few decades. The mere pace of life has increased to levels that those of earlier decades could only have imagined. Much of the world has come into a time in which most things are instantly achieved (“Proceedings of the Media Ecology Association: Volume 11”). It is, in fact, the era of instant gratification, in which much is sacrificed in the search for convenience and efficiency. Many see the ever falling value of face to face social interaction as being directly connected to the spike in modern media technology. Communication through technological media, in particular has advanced by leaps and bounds. With the click of mouse or the touch of a screen people are, in seconds, be put into contact with others that are tens of thousands of miles away. While this marks a definite height of media technology – linking people that would, in another time, not have been so connected, it would seem as though the use of the technology to communicate instantly with typed words on a digital screen has replaced other modes of human interaction.

Younger members of generations of the 21st century have chiefly taken to the latest forms of communication: emailing, texting, messaging, et cetera… Physical and interpersonal communication had been the status quo for hundreds of years. A person’s personality and ability to speak, convey his or her ideas with charisma, and articulate well using not just words, but body language and eye contact have long been the defining characteristics of the greatest people of our societies. This is changing. It has become the preferences of the general public to send emails instead of taking the time to write letters, to send texts messages from phones instead of calling from them, and to friending someone on a social network instead of asking to spend time with them. It can be seen that the ever falling value of face to face social interaction and communication as being directly connected to the spike in modern media technology. In another way, technological media used for recreational purposes has had its various effects on social interaction as well. Gaming for instance, is one entertainment that has for years been met with very mixed opinions and arguments.

I will not venture to link the meager social skills to or violent behavior to the playing of video games here. There are many examples of video games bring people closer together. Upon interviewing several people that play video games regularly, I found that many play video games with other people. Many play video games with their friends and family. A percentage of these people even said it was a routine of their family to have “game night” as a sort of tool to encourage familial bonding in the household. On the other hand, however, there was a significant number of people that I interviewed that played and preferred to play their video games alone and spent little time with their families or in social settings away from video games. These people spent many hours alone with nothing but a screen, a game controller or mouse (depending on the medium the game was being played on), and sometimes an opponent and fellow gamer several miles or states away.

When asked about other activities they took part in during the week or weekends, their responses were meager. Few partook in other activities, social or otherwise. In this way, one can understand video games to be a hindrance to the social interaction of the many individuals that play them. A gamer, distracted by a screen for countless hours a week does not have the time a person unimpeded by such things may have to take part in regular conversation with his or her peers. Television is yet another technological medium that has been argued over in its decades of use. Perhaps the varying viewpoints on the positive and negative aspects of television stem for the many purposes it can and has served. There are many channels on any cable television that are geared toward the moral and academic education of their viewers. There are also many more channels that are meant for the simple enjoyment of their watchers. A number of researchers propose that spending a small amount of time watching the more wholesome programs can, to some degree, strengthen families and friendships (“Inclusive Leisure Services”).

Then, of course, there are many researchers that continually warn against television. Television is among the easiest of society’s media technology; easiest to operate, easiest to access, easiest to become addicted to. It is also possibly the most passive of media technologies today requiring almost no thought to use recreationally. Television, without the motive of the viewer to have conversation with those around, presents little chance for growth of social interaction between individuals. Now, possibly the most controversial, though fastest growing media technology in use: the cellular phone. There has never been any denying the convenience of the device. There have been, however, thousands of complaints and arguments against the cell phone for its ability to capture and hold the attention of its user. The cell phone has recently become all forms of media technology rolled into one: the telephone for calls, the camera for photographs, the music player, the television for viewing movies and TV shows, and the internet for all other digital uses, and so the list goes on… The younger generation of today can only just imagine the world in which most, if not everyone, has a cell phone – which, ironically, was not so many decades ago. The benefits of the modern cell phone to social interaction are obvious.

Though more advanced than it was years ago, it still holds to its original purpose. The cell phone still provides the easiest, most convenient way to contact friends and family. In an emergency, it remains to be the best way to call for help. Modernly speaking, one can always send a quick text to ask how a friend is doing. Several million people would not be able to function or go through their daily routine without their cell phone. However, the opposition lives on. Many researchers maintain that the cellular as it is today is one the largest distraction to social interaction rather than the aid that others believe it to be (“The Impact of New media Technologies on Social Interaction in the Household”). Schools and certain work places have banned them for the fact that the people can’t seem to keep them from interrupting their work and learning. It is possible to now to walk into a room filled with people that in decades earlier would have been filled with individuals mixing and socializing with each other, but now, could be packed with overzealous texters and social networkers gazing down at small screens in the palms of their hands.

This generation has been described as incessantly “plugged in” – constantly in communication and in touch with technology (“Plugged In: generation Y Guide to Thriving at Work”). No other device is credited as much for the decline in values for face to face physical interaction than the cellular phone. Nor is any other device so credited for it advantages. It is evident that digital media technologies, such as television, video games, and cell phones have increasingly lead to social isolation and a growing privatization in social settings that would’ve been very different decades ago. It is also true that communication in general has become more impersonal than ever with the advancement of these technologies. Digital technologies are negatively affecting social interaction and communication between individuals. It is right to worry about the drastic changes they present society’s relationships and values. In order for digital technologies to positively impact social interaction, friends and family have used these devices as a way of communicating and interacting with each another.

This has to include using the media technology as a medium to interact, such as, playing a computer game together or watching television together and discussing it afterwards. It is important for individuals to consume new media technologies together – thus, promoting togetherness – instead of individually. By consuming technology individually, this leads to social isolation. In turn, this results in a drastic decrease of communication and social interaction in all social groups. Though one thing is clear: as the presence of technology in our lives becomes more pervasive, the greater the changes in our interactions will be. 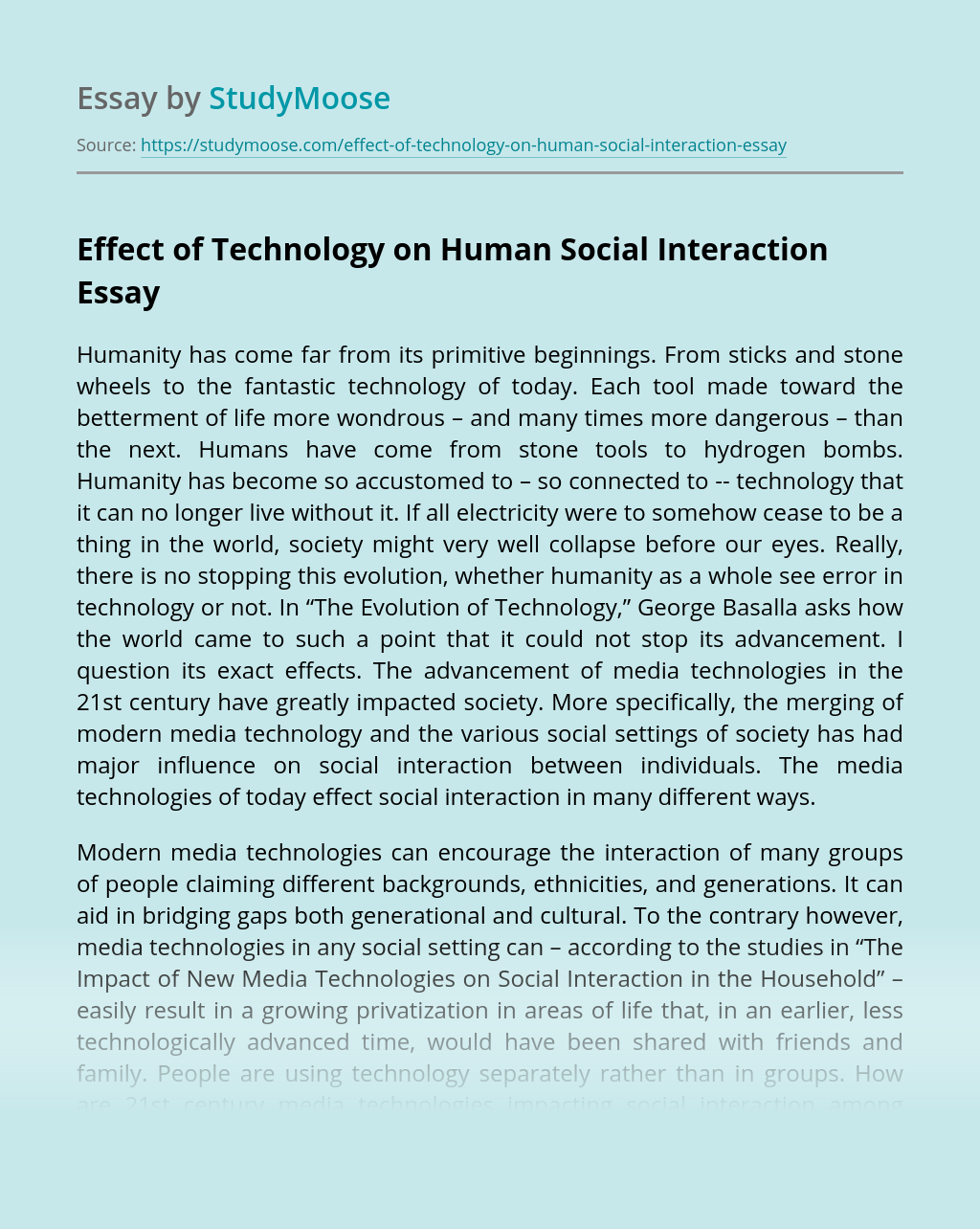 Turn in your highest-quality paper
Get a qualified writer to help you with
“ Effect of Technology on Human Social Interaction ”
Get high-quality paper
Helping students since 2015
Stay Safe, Stay Original