I have decided to analyze three different journal articles related to the novel ‘The Adventures of Huckleberry Finn’, written by Mark Twain in 1884. I chose this topic because the novel is widely considered a masterpiece.

In fact, Ernest Hemingway described its importance with the following sentence: “All modern American literature comes from a book by Mark Twain called ‘Huckleberry Finn’. In addition, the topic has a great interest because the novel has always been a subject of controversy due to racial issues and the alleged praise of juvenile delinquency that it portrays.

Don't use plagiarized sources. Get your custom essay on
“ Huckelberry Finn ”
Get custom paper
NEW! smart matching with writer

The three articles that and I am going to comment on are the following: 1) Huckleberry Finn and America (Chicago Tribune, January 17, 2002) 2) Huck Finn, Censorship and the N-word Controversy, by Delia Lloyd (www. politicsdaily. com, January 6, 2011) 3) Light out, Huck, They Still Want to ‘Sivilize’ You, by Michiko Kakutani (The New York Times, January 6, 2011).

In order to compare and analyse these three articles, I am going to focus on two main points: the overall opinion that the authors of the different articles have about the book (which is usually very good) and what they comment on the controversial matters that novel deals with.

First of all, I will concentrate on the overall opinion that the authors express regarding ‘Huckleberry Finn’.

On article 1, the author (whose name is not revealed) defines the novel in the following terms: ‘Few books in the U. S history have been as influential—or as controversial—as “Huckleberry Finn”…’. Furthermore, he added: ‘ “Huckleberry Finn” not only has survived the efforts to bury it, it has thrived and it has grown as a teaching tool’.

As we could see, the author praises the novel strongly. In addition, he rejects the most critical opinions and defends Twain’s intentions (…Twain was skewering hatred and racism, intolerance and religious bigotry, royalty and imperialism’). In the case of article 2, the author, Delia Lloyd, does not express a clear opinion about the novel itself.

However, she declares herself as “a devotee of Mark Twain’, so it is likely to think that he has quite a positive opinion about the novel. Regarding article 3, its author, Michiko Kakutani, quotes Hemingway’s famous sentence about Twain at the beginning of the article. Apart from that, there are not any more explicit opinions about the novel itself.

However, a thorough reading of the article evidences a strong defence of it, and the author shows a very defiant attitude with those who criticize it. In terms of controversy, the articles express different opinions and ideas, and the authors make clear what they think about the nature and the novel and the convenience of altering it. For instance, it is important to point out the different dates in which the articles were written.

Whereas article 1 was written in 2002, articles 2 & 3 were written the very same day (January 6, 2011) and were triggered by the same cause (a university professor, Alan Gribben, had written a new version of ‘Huckleberry Finn’ replacing controversial words such as ‘nigger’ or ‘injun’ for more neutral, inoffensive terms). The author of article 1 is very critical with those who aim to disapprove the novel. In fact, he stated:

‘Twain wrote satire, and there are glorious lessons in his books even if they ruffle readers or appear, simply in the telling of the unvarnished truth, to somehow glorify injustice and racism’. In addition, he ends the article with a sentence that leaves no doubt about his opinion regarding racial and social controversy arisen by the novel.

(‘Huckleberry Finn is a glorious celebration of friendship and tolerance triumphing over the racism and hypocrisy of the day. That is why it’s a hard book to read—and why it is one of the greatest works of American Literature’). Delia Lloyd express a somehow ambiguous opinion about whether is convenient or not to introduce changes in the novel. On the one hand, she says to be ‘sympathetic’ with several authors quoted in her article, who are in clear contrast with Gribben’s version of the novel (for instance, Matt Blum is quoted as saying ‘How can we expect children to learn real history if we sanitize it for them?

’, whereas Elon James White argues that ‘the only way to get Americans to deal openly and honestly with prejudice is to force students to be uncomfortable with terms that—unpleasant though they may be—are part and parcel of our country’s blatantly racist past’). On the other hand, Delia Lloyd also makes some positive remarks about Gribben’s ideas later on in the article, probably based upon her experience as a mother (‘As a parent, however, I’m less sympathetic to Gribben’s critics’, or ‘…there are more practical reasons to think that having a cleaned-up version of “Huckleberry Finn” isn’t, as Salon’s.

Mary Elizabeth Williams’ puts it, “the worst thing in the world” ‘). Finally, article 3 is opposed to change the original version of the novel. This could already be implied from the title, which misspells the word ‘civilize’. This is a clear reference to the tendency of some characters of the book to pronounce words wrongly. Michiko Kakutani develops this idea throughout the article, refuting Grribben with subtleness and irony. As a result, he sometimes describes Grubbin labour with adjectives in inverted commas (‘improved’) or using aggressive ones to refer to him and his work.

(‘Being an iconic classic, however, hasn’t protected the novel from being banned, bowdlerized and bleeped’). To conclude, I must say that, after reading the novel and several articles related to it, I think that the novel should be preserved in its original state. As far as I’m concerned, such a masterpiece deserves to be respected and remain unaltered. In addition, teachers should be very careful when explaining it to children, and try to transmit them the real (and benevolent) intentions of Mark Twain. Bibliography -Huckleberry Finn and America (Chicago Tribune, January 17, 2002).

An article written in the scope of the PBS series directed by documentary filmmaker Ken Burns, which appeared shortly after the article. -Huck Finn, Censorship and the N-word Controversy, by Delia Lloyd (www. politicsdaily. com, January 6, 2011). It is an ambiguous article about the necessity of changing ‘Huckleberry Finn’’s most controversial parts. -Light out, Huck, They Still Want to ‘Sivilize’ You, by Michiko Kakutani (The New York Times, January 6, 2011). A strong defence of the novel and fierce critic of those who intend to change it. -Playing in the Dark: Whiteness and the Literary Imagination (Toni Morrison, 1992). 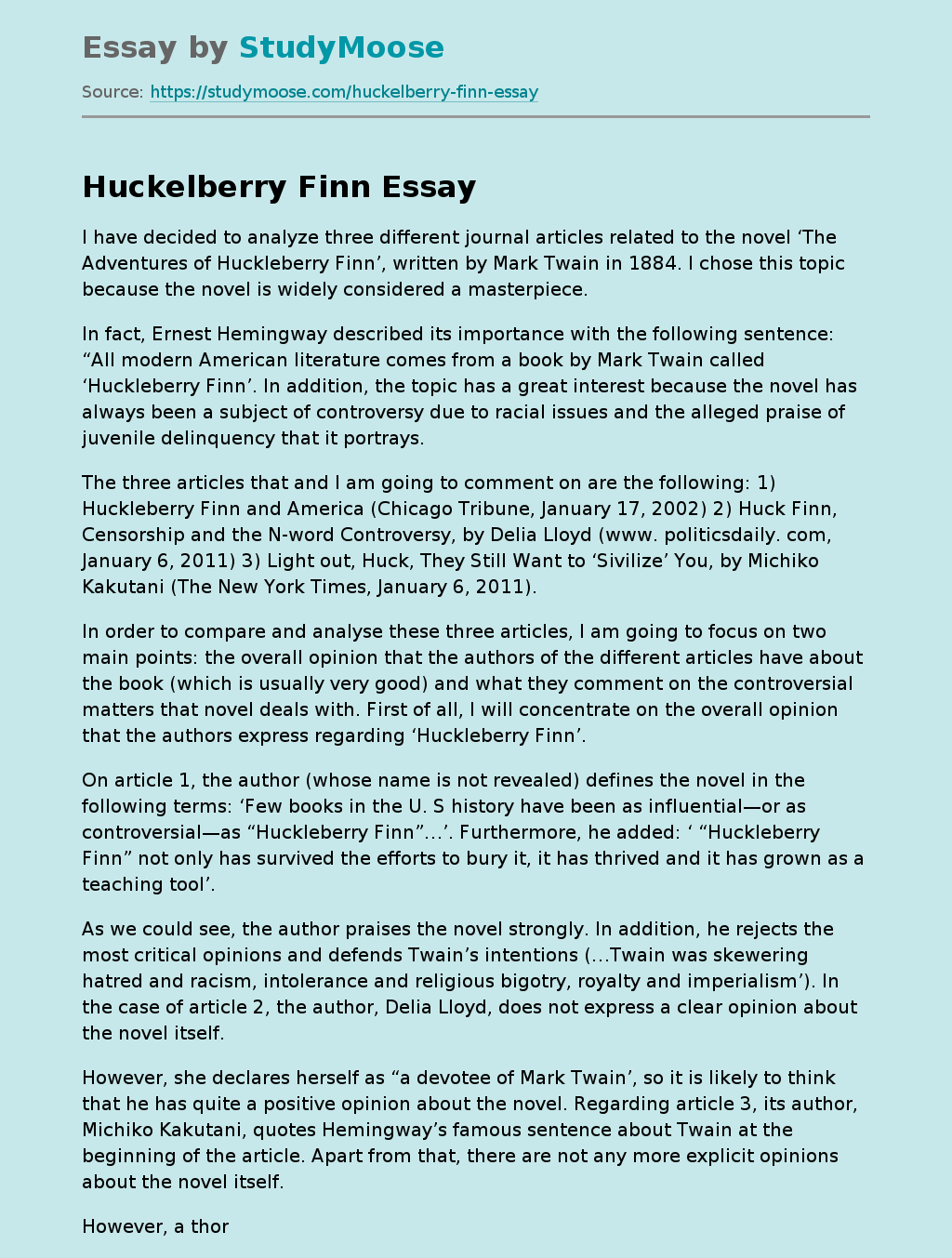