How to Present the Past to Prevent the Future?

The United States of America’s Economic Backstory is not one that has favored diversity. Even during pre-revolution America, the economic elite from England wished to keep hold of their power through any means. This was done through unfair taxing and exploitation of workers; a theme we see even in today’s society.

The world is full of cycles. There are months dictated by the movement of the moon and the sun’s position in the sky relative to constellations. Human history follows a similar cycle, but with more randomness and variety, introduced by the many acting beings within it.

Don't use plagiarized sources. Get your custom essay on
“ How to Present the Past to Prevent the Future? ”
Get custom paper
NEW! smart matching with writer

Teaching about the racist and classist problems within America might solve the problem or it could be even worse for our populous.

Despite what the pledge of allegiance says, America is not a Republic. We live in a plutocracy. A government run by the rich, and an information system dominated by the corporate interests that feed the neo-liberal economic system in which we live.

Introducing ideas about the history of race or classism within K-12 education would create exponential problems. Should it be discussed? Yes. The issue is not if it should be discussed but what are some of the issues from its discussion and how people will manipulate it.

Within the scientific community the consensus on temperature change and environmental impact from industrialization is that is is caused by greenhouse gas emissions. This is an important concept to teach our kids as it will be one of the biggests issues they face as a generation.

The State of Texas said that these books were slanted to support the liberals and there agenda. Personally it is hard for me to not see a connection with that whole view and Koch Brother’s oil investments within the state. I understand that idea, why would want the government criticizing a business that generates jobs and capital for the state? The short answer is that you do not want to. The government does not need to worry about the comforts of the common as much as it needs to worry about the conferts of the modern plutocrat.

These people thought American history have been the ones who push change. Take the founding fathers, most of which own plantations in which enslaved individuals did all the labor. Some were forward thinking enough to try moving past the ideas of slavery, but others enjoyed sipping on there mint juleps on their porches. Even though the explanation of african americans is not at the same level as it was, we as a society are still dealing with the shattered glass of the southern elite.

If the government was to put into effect a mandatory graduation requirement to take an ethnic studies class there would be uproar. Within the south particularly there would be a huge outcry of those who feel as if they are being vilified. Painting anyone’s heritage in a negative light as the dark evil villains of story of American history will only seed distrust within the government. Even if we try to not describe it as so, these conversations could devolve easily into that by young teachers who can not navigate these waters.

Even if the non binary way of viewing history was in the curriculum that does not mean it would be successfully adopted by everyone. Especially within the K-12 as teachers are more focused on getting there students ready for standardized testing that will get there school more money than meeting some kind of greater good. Even if these teachers are socially motivated they will never adopt it as useful because of their focus on keeping the schools aflot economically. Knowing that better funding will lead to better educational expenses.

Teaching within K-12 is just like every other blue collar job in the US they are so focused on living in the now that the larger bigger picture escapes them, and the none school employees push that agenda even further.

This is why K-12 is not suitable for the large societal change that needs to happen in America. The post secondary institution is ideal and would be a good place for this to exists. Furthermore the diversity that exists within post-secondary both within the instructors and the students they teach. We

How to Present the Past to Prevent the Future?. (2019, Nov 25). Retrieved from https://studymoose.com/how-to-present-the-past-to-prevent-the-future-essay 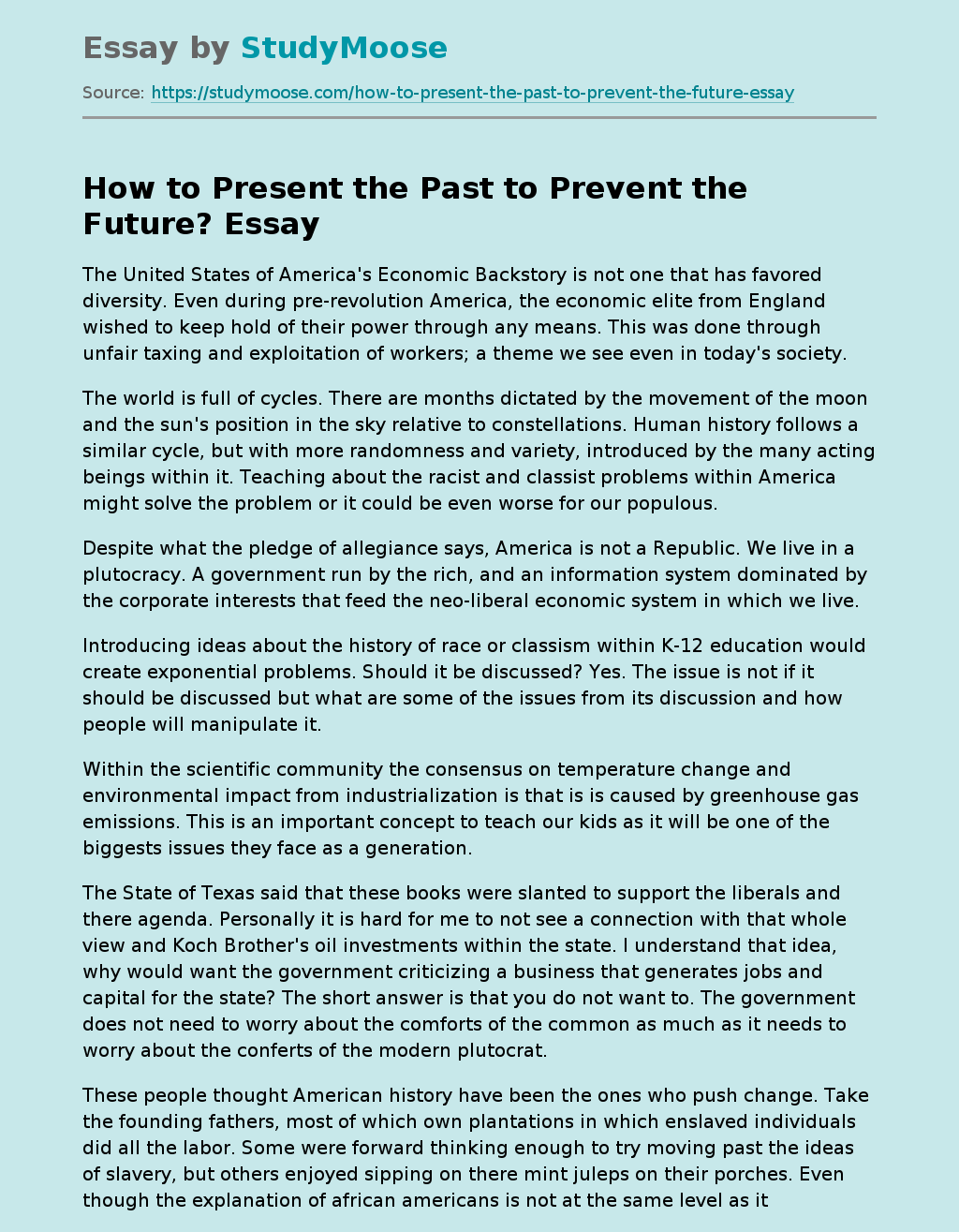