How significant was Martin Luther King’s contribution to the civil rights movement in the years 1956-68?

There is no doubt that MLK shaped the way people campaigned for black civil rights in America during these years however weather that was significant to any head way they did make, one example of his significance is the amount of peaceful protest that was carried out, now that MLK was promoting peaceful protests more people could participate in campaigning for what they believed, this made the supporters for the civil right movement far greater in numbers than ever before and opposing people found it harder and harder to suppress any action they may take.

Don't use plagiarized sources. Get your custom essay on
“ How significant was Martin Luther King’s contribution to the civil rights movement in the years 1956-68? ”
Get custom paper
NEW! smart matching with writer

The Montgomery Bus Boycott is a perfect example of a peaceful protest headed by MLK this was because this was the first real push for blacks to be more equal to whites and so they could be treated as people, the boycott would also not have succeeded if it weren’t for MLK as he provided structure and inspiration for everyone taking part. This is significant because it gathered more supporters for the movement and gave them more influence when it came to changing things.

Another reason that MLK was significant was he branched out the campaign from the south to the north and west which were places which may not have been as bad and public about it but were still very racist and discriminative towards blacks, this is significant because it helped a lot more blacks join in with the campaign and help support in numbers, it also made the pressure on the government larger as there were more and more supporters for the campaign and more and more people (not just blacks) who could influence decisions.

MLK had a special gift of being able to create moving and inspiring speeches, this highlights his significance because it was him that was the face of the campaign and with his inspiring speeches he created more and more support for the campaign but most importantly more white sympathisers as they had a lot more power and influence. One other thing that highlights MLK’s significance to the civil rights movement was his death.

This was significant because of all the people who looked up to MLK and viewed him as an idol and inspiration now had no one to lead them, this led to confusion and left people not knowing what they should do and who to follow however people also took his assassination as the point where they stand up and really fight for what they believe in. MLK didn’t always pull of these miracles and get more support and get blacks closer to their goal as there have been a lot of examples where MLK didn’t help or he did and didn’t succeed: one example is where he tried to take the fight north and thought that the struggle in the south would pay dividends however when he left Chicago and left Jesse Jackson in charge people criticized him for not finishing what he started and left people loosing respect for MLK and the civil right movement.

Another example of MLK not being a help and sometimes more of a hindrance to the progress of the black civil rights movement was when he agreed to be part of the Montgomery bus boycott and when he agreed to stay in jail, on both of these occasions MLK left and in turn left people doubting his word and judgement. Another example is the Meredith march, MLK did not set out to go to the march until after James Meredith had been shot, this gave people the impression that king only showed up because someone was hurt and not to support the cause even though it was a gesture of good will from MLK.

MLK also helped out in the freedom summer in 1964 and the brown vs. board case, sit ins that took place all over America, Freedom rides and Violence in Montgomery. In conclusion I think that it would be incorrect to say that MLK was insignificant to the civil rights movement in these years however he cannot be held solely responsible for the success they had as he always had to have the support of thousands of protesters, people in some sort of power and sympathetic whites.

MLK also acted as a martyr and his death inspired thousand. Also other organisations did a very good job of recruiting people and getting support. That is why I would consider him one of the key factors along with other organisations and the people that turned up to rallies and did the dirty work.

How significant was Martin Luther King’s contribution to the civil rights movement in the years 1956-68?. (2016, May 06). Retrieved from https://studymoose.com/how-significant-was-martin-luther-kings-contribution-to-the-civil-rights-movement-in-the-years-1956-68-essay 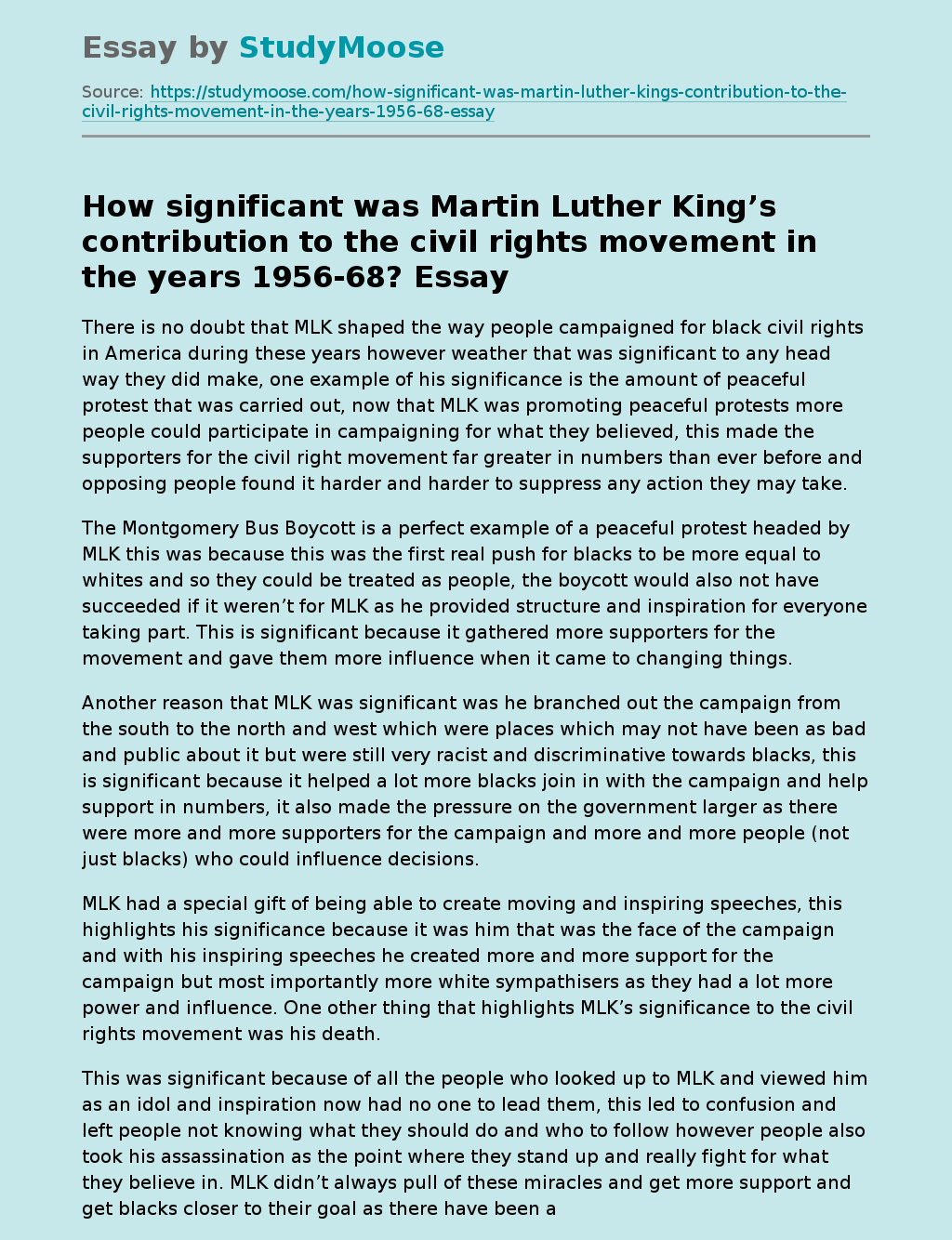