How McDonalds use motivational theories

To what extent do McDonalds use motivational theories to enhance the performance of their employees and hence increase efficiency/productivity? Are these methods effective?

McDonalds is a large multinational company that supplies millions of people with fast food. It is important for them to ensure that the workforce they employ is working to their full potential. McDonalds are very customer/ market orientated. They depend on a reputation for customer service. If employees are not motivated then this will suffer. If workers aren’t motivated costs rise.

Don't use plagiarized sources.
Get Your Custom Essay on How McDonalds use motivational theories Just from $13,9/Page

“When an employee is given a task to do and it is not carried out satisfactorily, this failure may well be due to a lack of motivation, rather than a lack of ability”. With this in mind McDonalds must ensure that their workforce is motivated.

Motivation can be linked to a number of factors such as pay, working hours, working environment etc. (see appendix p1 for full list).

As well as these the corporate culture and management styles can play a part influencing the motivation of the employees.

Well-motivated employees achieve more. They are more committed, vigorous and productive. Over the years various strategies for motivating employees have been developed. These are known as motivational theories. Many different and often contrasting theories have been put forward by a number of different theorists (see appendix p1, p2). I am going to look into the extent that McDonalds, Hertford, use these.

Employees who are poorly motivated often score badly on at least one of the factors influencing motivation: an undemanding job, unpleasant working
conditions and low pay. (see appendix p1)

A lack of motivation- either limited to one area or department, or spread throughout the firm- cause employee dissatisfaction. This results in a higher labour turnover leading to a waste of time and money (see appendix p2) increased incidents of absenteeism and/ or sickness, poor timekeeping, and more disputes between both formal and informal groups within the firm.

Motivational problems are not easily overcome. Normally if one person in a whole workforce is unmotivated they will start moaning to the other employees. This can then cause the problems to spread as those that have heard the moaning may also start to moan (low motivation and moaning become contagious). The problems become very hard to stop dead.

I feel that an organisation such as McDonalds will try to prevent them arising in the first place. Also according to V.H Room the greater the motivation of an employee the greater the chance of them performing a set task providing they have the ability. He put this into an equation:

This equation leads me to think that McDonalds will use a lot of motivational theories as the equation shows that motivation is a very important factor influencing a person’s performance so McDonalds will try to increase it in as many ways as they possible can.

To find the information that I needed I constructed a questionnaire table that gave me a lot of information in as little a time as possible. One table told me what McDonalds were doing to motivate the staff and which of these motivation techniques they found effective. (See appendix for method on the questionnaire and data collection)

I used data collected by the key skills group in my year. They constructed a questionnaire to pupils in year twelve to find out “what factors motivate them in their paid work and how this information could be useful to employers”. Then I took particular questions from this for my work and they gave me the results for these. The questions that I used were 5,6 and 7. (See appendix for copy of this questionnaire Pages 6,7). This was relevant to me as some of the question lead to answers that could be related to motivational theories and motivation in general.

The results collected showed that McDonalds used a lot of factors to motivate their workforce and the results showed that the factors the employees found the most important in motivating them were the ones that McDonalds had satisfied well. (The results table in the appendix p4,p5 shows this where the two columns both have the number three in them)

It seems that rather than use one single motivational theory McDonalds have taken all of them and tried to combine as shown on the bottom of the back page in the appendix where I have linked factors from my questionnaire table to specific theories. (See appendix p5 for evidence)

McDonalds has a democratic leadership style and a task culture (see appendix for definitions/explanations p1) both of which are associated with McGregors theory Y worker (see McGregor in the appendix p1). This increases motivation according to the survey that was carried out by the key skill group. (See appendix p8 for results proving this)

There is group working associated with Elton Mayo yet there is a performance related pay scheme that would be linked to F.W Taylor. They have even taken into account the work done by Fredrick Hertzberg which says that an employees needs can be put broadly into two categories of motivators and Hygiene factors (see appendix p1 Hertzberg). He says that although hygiene factors should be present- motivation falls if they are ignored- they themselves do not motivate employees. His theory suggests that managers must provide motivators in the form of job enrichment and job rotation schemes. As you can see from the table of results (appendix p5) McDonalds staff have said that this is important to them and have said that job rotation schemes have been used and used well.

The Questionnaire that the key skills group constructed showed that most of the students were given training in their job and that the vast majority thought that they should have been trained. It is suggested that if proper training were given it would motivate the employees. However I feel that whether an employee is given training or not is better linked to Hertzberg’s motivators and hygiene factors because he says that a hygiene factor alone will not motivate a person however if the factor is neglected then it will cause a lack of motivation. This seems to be the case with training as shown by Question 6 of the key skill questionnaire.

My prediction that McDonalds would use a lot of motivational theories seems to be correct, as they do not just use one of the theories they have integrated all of them And they have a democratic leadership style. However despite all this they still have quite a lot of labour turnover. “We do everything we can to ensure that the staff are motivated. We give them proper training and a 4 week trial period yet myself and my colleagues still find ourselves short due to employees not staying with us for that long” said the store manager when I was conducting my research.

One view (a) could that this could be down to the fact that most of the employees are young and still at school, college or university. Therefore they may quit the job when they have to start revising for exams, when they go home from their universities or when they finish school and go in search of a permanent higher paid job or career. All of this leads to higher recruitment and training costs. Showing that although the staff they have stated they are motivated they are still losing employees thus showing that they are not being as efficient as they would like. They are making their employees more productive and efficient but are not being efficient in keeping them. (See problems of labour turnover in the appendix p2). Another view (b) could be that staff do not see McDonalds offering a long term career.

Alternative jobs are available to the staff and the pay is about the same (Evidence from results of Q5 in the key skills survey). This indicates that their staff retention problems are more likely down to the factors outlined in view (a) above.

From the data collected I can conclude that McDonalds in Hertford uses motivational theories to a very large extent. My research showed that they have tried to take all of the theories, put together by all of the theorists, and combine them as well as adopting a democratic leadership to make sure that they benefit from a hard working, motivated and therefore productive workforce.

I feel that the company is being effective in motivating the employees and my research proves this. This shows that they are using all of the motivational theories to their advantage shown in the appendix where the motivational factors are linked to theory.

One of the reasons for motivating the workforce was to increase productivity and I think that they have done this as my questionnaire showed that the employees were motivated. This motivation will increase their productivity and performance according to the manager and V.H Rooms equation. (See
appendix p2)

I conclude that McDonalds have increased their efficiency to a small extent just by increasing staff productivity because if each worker is producing faster then they are cutting costs in the form of time. However my research showed that McDonalds, Hertford, are not being as efficient as possible as they are still suffering from labour turnover but this may be nothing to do with lack of motivation but simply that the predominantly young staff do not regard it as long term employment option although they do tend to be employed for 1 to 2 years as part time staff.

How McDonalds use motivational theories. (2016, Jul 02). Retrieved from https://studymoose.com/how-mcdonalds-use-motivational-theories-essay 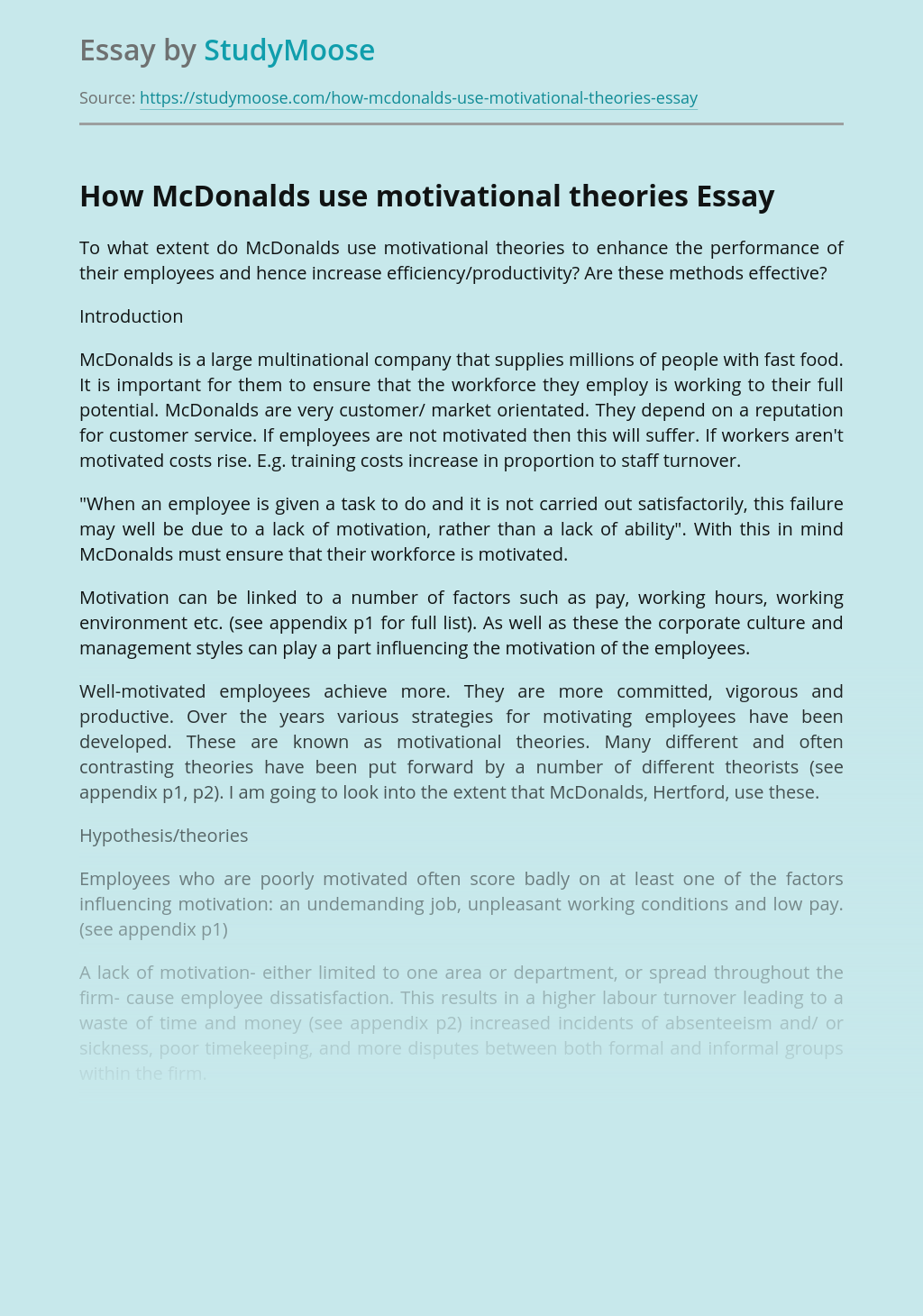 How McDonalds use motivational theories

To what extent do McDonalds use motivational theories to enhance the performance of their employees and hence increase efficiency/productivity? Are these methods effective? Introduction McDonalds is a large multinational company that supplies millions of people with fast food. It is important for them to ensure that the workforce they employ is working to their full...