How is Lady Macbeth Presented and Developed in Act 1?

Macbeth is a play full of tragedy; Which is what makes Macbeth one of the most famous plays to ever be written. Shakespeare presents Lady Macbeth in many ways, from language to emotion, and from action to technique. The famous English writer presents and develops Lady Macbeth as one of the most ruthless character to ever be presented. During the 1600’s, it is believed by many people that if you commit a bad act or deed, you would surely go to hell.

Don't use plagiarized sources. Get your custom essay on
“ How is Lady Macbeth Presented and Developed in Act 1? ”
Get custom paper
NEW! smart matching with writer

Lady Macbeth is the opposite of most women throughout the Jacobean era. An example of this is how women should not question their husbands power (Which she committed) And she also summoned evil dark spirits which signified that that person is indeed a witch. But is Lady Macbeth weirdly linked to the supernatural?

Shakespeare presents Macbeths wife- Lady Macbeth, as a petrifying, ruthless, powerful female who feels like a rat in a trap within the female society. According to the Shakespearean times, male traits were associated with aggression and coherence, whilst females contrarily were associated with beauty and tender thoughts.

As Lady Macbeth was genetically born a female with feminine “fluids”, she demands the ‘spirits’ to ‘unsex’ her so she can be seen as a male whom are more powerful- powerful enough to commit evil doings. Lady Macbeth also wants to increase her power by invoking the spirits to ‘make thick my (her) blood’; blood conveys a symbol of humanity and empathy for others. This metaphor suggests that Lady Macbeth demandingly asks to become more pitiless, heartless, and less sensitive; a feminine trait, thus making her more prone to kill.

The Lady with the rather switched-off humanity also belligerently asks for her spirits to ‘Come to my (her) women’s breasts and take my milk for gal’. Shakespeare uses and imperative to the word ‘come’ to show how demanding Lady Macbeth is to the spirits to let them come help her, which shows how desperate she is to murdering King Duncan in order to become the queen. The use of breasts in this quotation is an example of symbolism specifically symbolizing the femininity that she wants the spirits to snatch from her. This informs us that Lady Macbeth would rather replace her life-giving breast milk with a death-like, foul substance. Shakespeare attempts to convey the message that Lady Macbeth has the opinion that if she would slowly transform into a male and poison her fluid, would thus make her a tremendously powerful threat.

Furthermore, Lady Macbeth also has a peculiar, unnatural connection to the supernatural. She uses her suspicious connection to summon evil; which helps her reach her goals and fuels her need for power. Lady Macbeth says ‘Come, thick night’ implying that she has enough power to authorize evil dark forces. Pathetic fallacy is shown in this phrase to suggest that the blackness she has will cut off any sign of hope and light. Shakespeare sets an imperative mood by saying ‘come’, this highlights Lady Macbeths power, which concludes that she has the power over nature and can manipulate it to achieve her goals. This power links to witchcraft, if we look back at the beginning of the play, three witches control the weather as one of them asks ‘when shall we three meet again? In thunder, lightning or in rain?’ during the Jacobean period, it was thought that witches could create their own weather. This creates a doubtful and somewhat dangerous link between the supernatural and Lady Macbeth.

Lady Macbeth crossed the average women during that era. This is portrayed in the quote ‘Look like an innocent flower, but the serpent under’t’. This shows her ascendancy over her “love”, Macbeth. She uses these words to manipulate Macbeth, she would be a snake as they both are deceiving creatures. This can also be linked to the story of Adam and Eve in which they were manipulated by a serpents words. Lady Macbeth represents the serpent and Macbeth is the victim who will later on fall into a trap; this is extremely similar to the story of Adam and Eve in how Eve had foolishly.

How is Lady Macbeth Presented and Developed in Act 1?. (2021, Mar 18). Retrieved from http://studymoose.com/how-is-lady-macbeth-presented-and-developed-in-act-1-essay 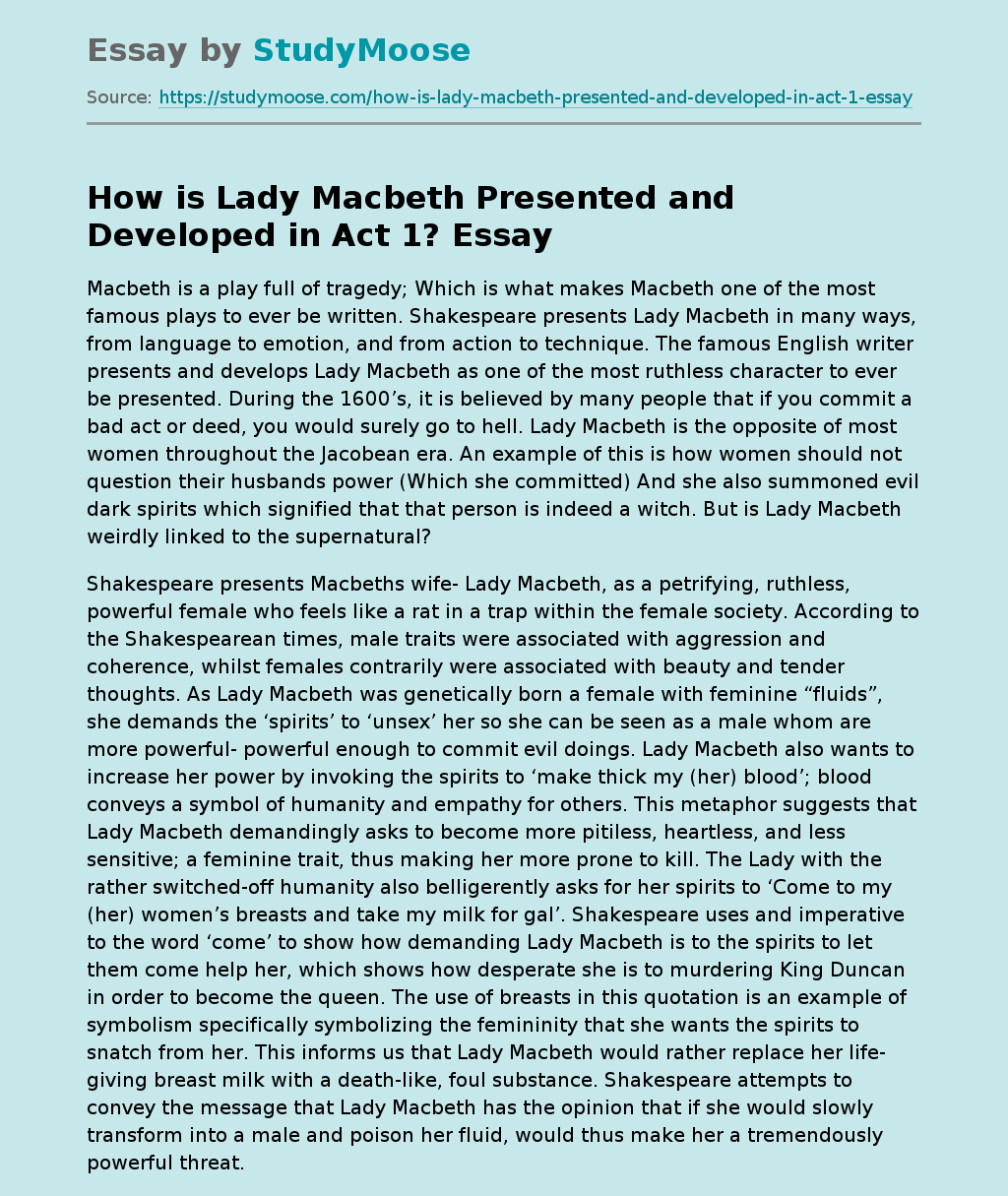