How electrostatics influence our lives?

Many of us have this wrong concept in our mind that insulators like plastic and wood cannot carry charges at all.

Turn in your highest-quality paper
Get a qualified writer to help you with
“ How electrostatics influence our lives? ”
Get high-quality paper
NEW! AI matching with writer

This is a wrong concept. The truth is that most insulators carry a special type of charge which conductors do not carry. The charge is created due to static electricity and is known as an electrostatic charge.

We might have heard of the term static electricity but most of the time we dismiss it as a small and unimportant part of electricity. But we are wrong; in this essay you will see the uses of electrostatics in our daily lives.

Static electricity can be produced by rubbing together two objects made of different materials. Electrons move from the surface of one object to the surface of the other if the second material holds onto its electrons more strongly than the first does. The object that gains electrons becomes negatively charged, since it now has more electrons than protons. The object that gives up electrons becomes positively charged. We experience many example of static electricity daily. For example when we close the television and then immediately put our hand on the screen, a cackling sound is produced and the hair on our hand stands up.

The same thing happens when we take off a woolen sweater or when you get of your car seat.

When rubbed with each other, or with a piece of dry wool, these insulators become positively or negatively charged. The charge of the insulator depends on its affinity to electrons.

Note that the balls are mounted on insulators so that they are not earthed and neutralized.

USES OF ELECTROSTATICS IN OUR DAILY LIVES

This is a machine used to clean the smoke produced by factories. In this smoke is passed through a meshwork of wires which are negatively charged. As the dust particles touch the wires, they get extra electrons and also become negatively charged. However the air molecules are small and stable and so they do not acquire any charge. Then as the particles move up, the negatively charged particles are attracted to positively charged metal plates fixed on the side of the box. This way the dust is removes form the dirty smoke and clean air is released.

Often you can see that on top of buildings, there is a short and sharp metal rod present which has been grounded. This is known as a lightning arrestor or conductor. It prevents lightning from touching the building and so protecting it.

When lightning (electricity) produced touches the rod, the metal rod (being a good conductor) conducts all the electricity and becomes charged. However the current keeps flowing and is grounded and neutralized.

The main principal behind this is using the fact that air becomes negatively charged and as foot traffic or wheels pass over the surface of the mat (which is positively charged) the dirt is attracted to the mat and so it controls the cleanliness of the surroundings.

A photocopy machine is one of the greatest inventions of man. It allows us to duplicate any piece of paper. This is how electrostatics is used to photocopy papers.

Firstly positive charge is sprayed onto the plate from a high voltage power supply. Paper is then placed through the plate and a light is shone through it. Where the paper is white, light passes though, where the paper is dark, a shadow is formed. The light falling on the white part just gives it the extra energy needed to allow the charge to escape to the earth and get grounded and thus the negatively charged ink is attracted to the dark areas, which is still positively charged. Then this is dried and given out.

In this process to paint car parts, the spray nozzle of the paint is connected to a negatively charged electrode and the part is connected to the positive electrode. This is why the ink is attracted towards the part. This process is better than the standard process because it gives a better finish.

In this setup, paper or cloth is fed giving them a specific charge. Polarized grains are supplied at the other end with the opposite charge. As they approach, the polarized grains get attracted to the material as an electrical field is produced.

In today’s world, no appliance can function without electricity including TV’s, computers, microwaves, music systems, etc. Producing electricity is one of the major problems faced by all the countries of the world. Nowadays due to their abundance and low cost, fossil fuels are used to turn water into steam which in turn moves turbines which move generators which create electrical energy form the kinetic energy. This is a graph of the fuel or resource used to generate electricity in the world.

This graph has been taken from

The invention of electricity and electronic appliances has greatly affected the life of people. This has an advantage as people get entertainment from these and also use them for more efficiency in their work. But however appliances like televisions decrease our brain power and waste our time. It also makes us lazy as we sit the whole day in front of the television.

The major sources for making electricity are fossil fuels. However when fossil fuels are burnt to release energy, they release poisonous and toxic gases like Carbon Dioxide, Carbon Monoxide, and Sulphur Dioxide. This greatly pollutes the environment. Also the usage of nuclear energy leaves us with a lot of waste radioactive material which is buried in the ground and hereby pollutes the land.

During cultural festivals, a lot of electricity is wasted due to the rich decorations that are done especially in marriages, receptions, famous festivals like Christmas and diwali and independence days. This wastage of electricity is a thoughtless gesture by some people and they will regret this wastage one day when generating electricity becomes very expensive.

After writing this essay, I have realized the importance of electrostatics in our lives. I have seen that electrostatics play an important role in almost every aspect of our life. One of the main concepts of electrostatics is electricity. In today’s world, no electricity will lead to a total failure and man will go back to the Stone Age. This is why we must all try our best to conserve and not to waste electricity as it is a gift to mankind. We must also use this great gift wisely and not misuse it.

How electrostatics influence our lives?. (2016, Jul 19). Retrieved from https://studymoose.com/how-electrostatics-influence-our-lives-essay 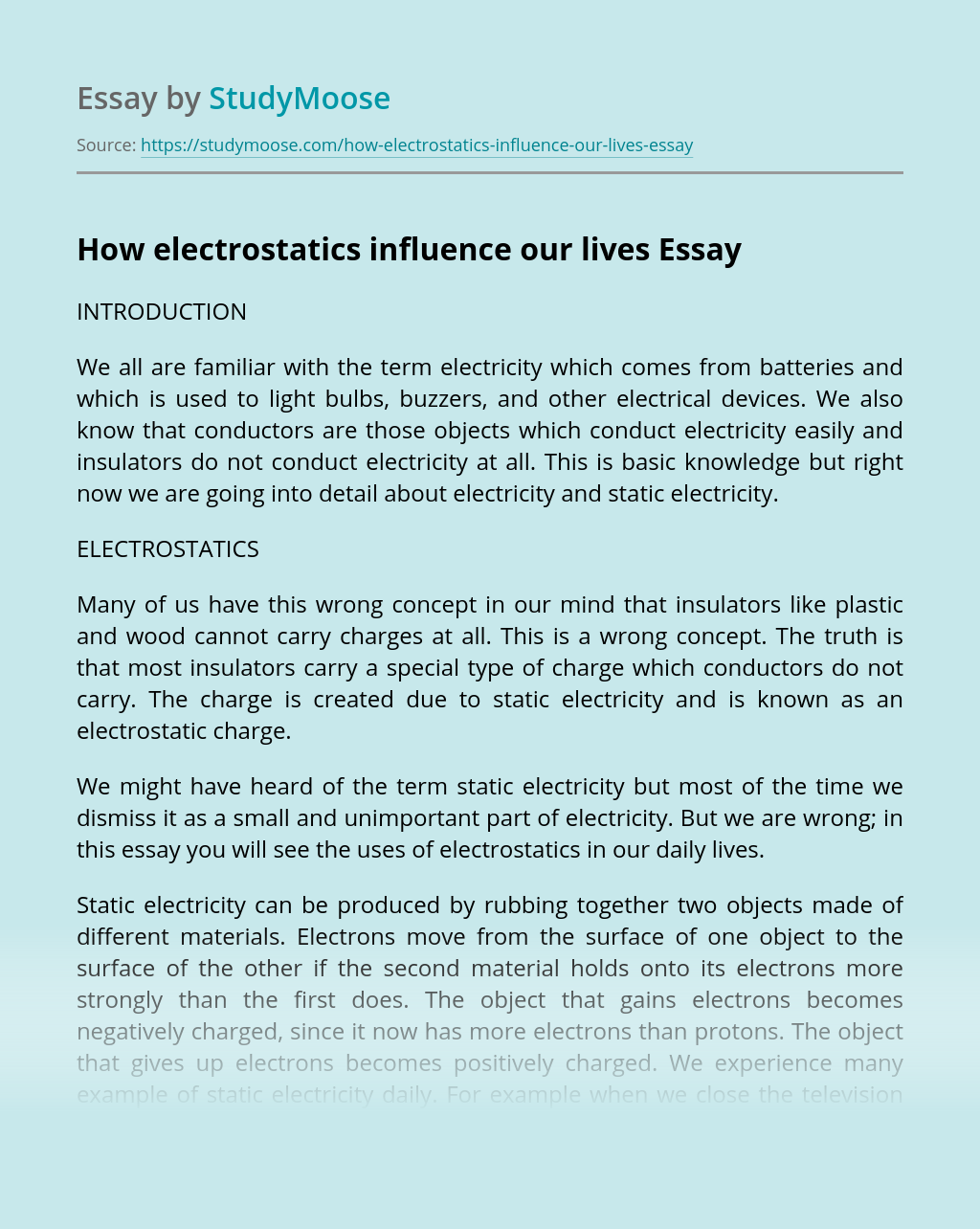 Turn in your highest-quality paper
Get a qualified writer to help you with
“ How electrostatics influence our lives? ”
Get high-quality paper
Helping students since 2015
Stay Safe, Stay Original