How does belonging emerge through enriching and challenging experiences, shaping us as individuals?

Composers often reveal different perspectives of belonging which are represented in different ways. Through their textual forms and techniques, they show that belonging can emerge through various enriching and challenging experiences.

These experiences shape the characters as individuals, defining their personal identities as people who exhibit confidence and fulfilment, or who are confirmed in their social isolation. In his feature film “Strictly Ballroom,” Baz Luhrmann uses striking film techniques such as contrast in lighting and costuming as well as effective camera work to explore cultural, social and personal belonging and how the identities of the characters are transformed through challenging and enriching experiences.

Don't use plagiarized sources. Get your custom essay on
“ How does belonging emerge through enriching and challenging experiences, shaping us as individuals? ”
Get custom paper
NEW! smart matching with writer

On the other hand, in the picture book “The Island,” Armin Greder uses various visual techniques such as symbols illustrated in dark charcoal to portray her perspectives of belonging. Compared to the enriching experiences of Scott in “Strictly Ballroom,” “The Island” focuses more on the lack of enrichment of the people who fear the new and different, causing them to become even more isolated than they previously were.

Lastly, in his short story “Dancing,” Angelo Loukakis informs and questions his readers about the experiences of the challenges and enrichment in relation to belonging to family and culture. He uses the literary techniques of conflict and contrasting dialogue to portray his personal perception of the effect of belonging on identity.

Firstly, in the feature film “Strictly Ballroom,” Luhrmann introduces his audience to the protagonist Scott Hastings to demonstrate how belonging enriches and challenges identity. Luhrmann’s representation of the 20th century microcosm of the Dance Federation allows him to explore a conformist, structured society that Scott challenges when he attempts to dance his “flashy, crowd pleasing steps.

Although the Dance Federation and Scott’s family are disappointed and angry with him, Luhrmann enables us to visualise the joy and excitement aroused in the audience, proving to us that one person’s outrageous, socially unacceptable actions can enrich another’s identity. Luhrmann highlights the challenges Scott faces in his negative interactions with the Dance Federation, Barry Fife, and Sheila. “Did I fail him as a mother?” reinforces the expectations and unwritten rules of the Dance Federation. These “barriers” to belonging are a major influence on the development of an individual’s identity.

Additionally, the introduction of Fran and her Spanish family allows Luhrmann to represent how Scott Hasting’s identity is enriched through the traditional culture and the new perspective of “dancing from the heart.” The natural monochromatic lighting and costuming used during the traditional, non-competitive dancing contrasts with the excessive, unnatural lighting and gaudy costumes in the “Dance Federation” scenes.

The new cultural and personal connections between Scott and Fran allow Luhrmann to explore new enriching experiences, such as dancing the Paso Doble in the final scene of the movie. Following Scott and Fran’s dance, the audience both physically and metaphorically steps over the barrier to belonging and comes together as one. This closing scene is an illuminating example of how overcoming the challenges to belonging can enrich our identity immeasurably.

In contrast to Luhrmann’s exploration of Scott’s enrichment through belonging, in his picture book, “The Island,” Armin Greder explores how when we refuse to accept the new, our identity is frozen in time. From the first page of the book, isolation is a major focus. The opening paragraph is disjointed with the line “he wasn’t like them,” separated from the rest of the text.

This technique mirrors the situation represented in the story, where “the man” is represented as an alienated, vulnerable figure. Many textual and visual techniques are used to display Greder’s ideas such as the use of dark, charcoal images to reflect the doubtful and suspicious attitudes of the “people on the island” towards the stranger.

Furthermore, the use of grotesque imagery displaying someone’s reaction to the man, reinforces the ignorant, xenophobic attitudes shown by the people. The image is comparable to Edvard Munch’s dramatic painting, “The Scream,” and immediately reveals that the people fear this new, different person. The man attempts to overcome these challenges to belong, but in the end is completely refused and is unable to enrich the single-minded identities of the people.

The tragic ending is represented by an overpowering grey wall that acts as a metaphor for the isolationist attitudes of the people on the island. These people keep new experiences out of their lives and value their sense of identity, security and connectedness with each other. Greder states, “they could shoot down passing seagulls and cormorants so that no one would ever find their island again.” Because of their insular perspectives, they choose to send the man to his death rather than accepting him.

Through his powerful representation of not belonging, Greder reveals that although the pathway to belonging may have challenges, unless we allow and encourage it to occur, our identities cannot be enriched.

Finally, in his short story “Dancing,” Angelo Loukakis explores how our identity can be transformed and molded through our experiences of belonging. His use of contrasting dialogue between Jimbo and his father in the lines “You are my son. I am Greek.

Therefore you are Greek” followed by “And you’re all fuckin’ philosophers too, you old bastard,” foregrounds the conflict present between Jimbo and his traditional Greek heritage represented by his dad. Loukakis places the focus on Jimbo’s feelings, revealing to his readers through techniques such as nicknames and slang, that Jimbo no longer wants to belong to the Greek culture, but wishes to be an Australian.

However, his family, who believe he should remain connected with his heritage, challenge him. Loukakis shows at the end of the story that Jimbo chooses to belong with his friends as an Australian. His identity is enriched through this new social circle but is also deprived of his traditional Greek culture. Through Jimbo’s changing perspectives and culture, Loukakis reveals that challenges will be faced on the road to belonging, but it will enrich our identity.

Ultimately, composers use a variety of techniques and text types to reveal their perspectives on belonging. Baz Luhrmann, Armin Greder and Angelo Loukakis, all deal with this concept promoting the consequences and benefits of belonging to people, place and culture. Although the stories and genres are very different, the message remains the same and informs the audience that belonging enriches and challenges our identity.

How does belonging emerge through enriching and challenging experiences, shaping us as individuals?. (2016, May 12). Retrieved from https://studymoose.com/how-does-belonging-emerge-through-enriching-and-challenging-experiences-shaping-us-as-individuals-essay 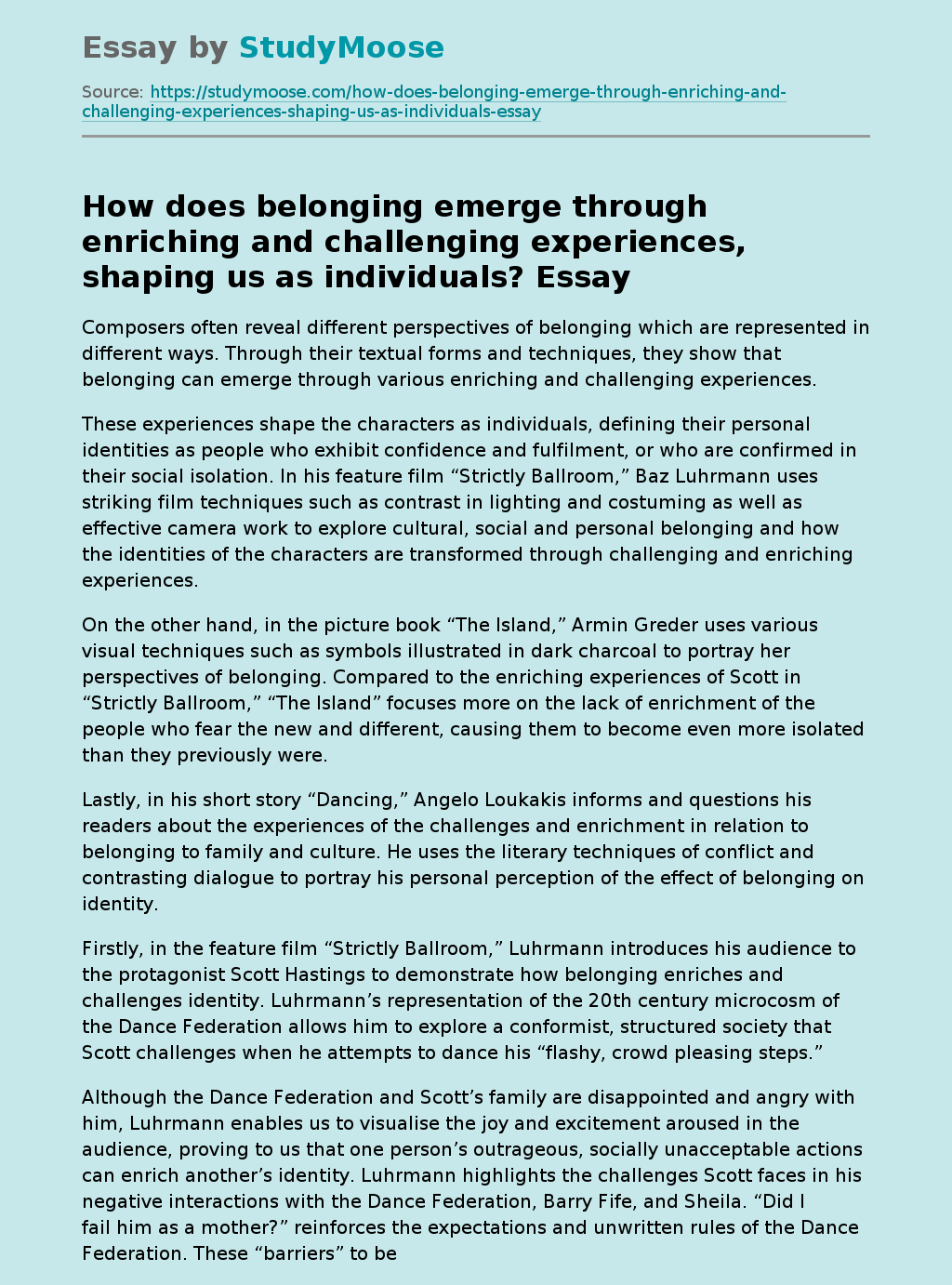