How do social roles and the environment affect behavior, attitudes and beliefs?

Our roles in social institutions and our various environments have a big impact on our behaviours, attitudes and beliefs. When placed in an extreme environment, individuals normally start to stress and feel unsafe. When appointed to reliable functions, indivuals in hazardous environments tend to act aggressive and arbitrarily in order to maintain control and avoid any kind of damage directed at them. When positioned in an extreme environment, one tends to presume that their values and morals can get rid of the extreme scenarios in that environment.

Don't use plagiarized sources. Get your custom essay on
“ How do social roles and the environment affect behavior, attitudes and beliefs? ”
Get custom paper
NEW! smart matching with writer

Sadly the unfortunate truth is that these severe environments generally take control over one’s behaviour and beliefs. This was proved in different experiments conducted such as Milgram’s Experiment on Obedience and Conformity and Zimbardo’s Experiment on the “Pathology of Prisoners”.

Under certain scenarios ordinary people, without any prior sadistic or violent history, can be forced and convinced into damaging others. These circumstances occur when the people committing the harmful acts are required into thinking that they are not going to be held liable for any of the acts committed.

Milgram’s experiment on Obedience and Conformity shows this concept. Milgram’s experiment included a researcher dressed in a lab coat, who advised a subject referred to as the teacher to teach a pair of words to the subject referred to as the learner. Under guidelines given by the researcher, the teacher was to administer an electric shock to the student, whenever the response he/ she gave was inaccurate.

The intensities of the shocks administered were to increase with each incorrect answer given by the student. Milgram discovered that bulk of the participants administered the highest level of the shock, in spite of the agonizing pleas and sobs made by the student. Milgram’s also came to the conclusion that regular people might end up being accomplices to hazardous behaviours which violate human rights when they are persuaded into believing that they do not have to assume full duty for if anything damaging need to take place to other people.

Philip Zimbardo’s Stanford Experiment on the “Pathology of Jail time”.
Roles assigned to us usually tend to have huge influences on our behaviours and attitudes towards others. We usually like to assume that our morals and values will triumph over destructive environments. The unfortunate reality is that when placed in an extreme environment, the environment usually takes control of our attitudes and beliefs. Zimbardo’s Experiment on the “Pathology of Imprisonment” would prove how difficult it is to overcome the temptation to abuse the power and authority granted individuals. Zimbardo’s experiment involved a mock prison in which participants were assigned their roles arbitrarily by the flip of a coin. Half were assigned the roles of prisoners, while the other half was expected to portray the roles of guards. After the first two days the participants seemed to become their roles, as opposed to them consciously acting out their roles. There was a sudden and extreme change in behaviours in which the guards developed a cruel and degrading approach towards the prisoners. The prisoners on the other hand became servile towards the guards and displayed signs of depression and resentment towards the guards. Zimbardo’s experiment reveals that because the guards were granted authority and power over the prisoners, they begun to act in ways in which they will not usually act, in their everyday normal lives. The prisoners on the other hand became depressed and servile due to the fact that they had no control or power in the environment in which they were placed in.

The Documentary about Zimbardo’s experiment.

In extreme and toxic environments such as Zimbardo’s mock prison, individuals with power exercise cruel and intimidating measures towards the people they control, in order to maintain order and a sense of power. In the documentary about Zimbardo’s experiment, Psychologist Zimbardo along with other participants give detailed accounts of what occurred during the time period of the experiments. Dave Eshleman, who participated as a guard revealed that he instigated the method of harassment and verbal abuse against the prisoners in an attempt to show his authority and dominance over the prisoners. Eshleman also expressed his disbelief at the fact that none of the good guard made an attempt to point out his tyrannical abuse of power, but rather was stunned that the other prisoners went along with his harsh attitudes. Clay Ramsay, who participated as a prisoner, recalls losing his sense of comfort and also recounts having his thoughts become distorted under the constant verbal and emotional abuse administered by the guards. Ramsey reveals that being placed under such an environment, made it easy for him to display signs of anxiety and severe stress. Referring to these accounts given by the participants, one can come to the conclusion that power corrupts. While individuals subjected to harsh and unjust abuse from authoritative figures find it difficult to stand up and defend themselves. This reveals that victims of abuse find it tough to stand up to their abuser out of fear.

When given a high position in a stressful and extreme environment, individuals with power desire respect and obedience from the people whom they control. In certain circumstances, authoritative figures resort to violence and aggressive behaviours to confirm their authority. This usually occurs when they people they control stand up to them, or challenge their actions. When given excessive power to establish regulations and exercise power, authorities become excessively aware of the power they hold and use the fear of their subjects to make them obedient. The movie “Das Experiment” conveys this idea. In the movie sadistic guard Berus is considered as the dominant guard among all the guards. He believes that the key to maintaining power and order is through humiliation and dehumanization of the prisoners. Berus authority and aggressive behaviour is challenged by Tarek, the dominant prisoner. Upon the realization that Tarek, is not a push over Berus and Exhert, another abusive prison guard, turn to drastic measures such as urination on Tarek, and forcing him to clean the toilet with his clothes. Violence was also used as a means of taming Tarek and the other prisoners. The Movie “Das Experiment showed that when giving power and authority over others it is easy to become tyrannical in an attempt to maintain power and establish who is in control.

Soldiers who run the prison located in Abu Ghraib turned the prison into a torture site for prisoners and captured prisoners. Prisoners brought in for interrogation, faced abusive treatments and harsh torturous measures, in an attempt on the part of the soldiers, to get the prisoners to crimes they may have or may have not committed. The soldiers in this environment had no previous known records of an abusive or sadistic history. These soldiers were normal individuals placed in a toxic and unsafe environment. The soldiers placed in the Abu Ghraib prison did not receive formal training, and may have felt threatened and insecure in an unstable environment such as Iraq. Thefore in order to remain and be perceived as the total authority figures, the soldiers ruled with dominance and fear. Prisoners were subjected to physical, sexual, mental and emotional abuses by the soldiers. This incident proves that even people considered normal, when place din stressful environment scan lose all sense of morality. Similar to Zimbardo’s experiment, the soldiers at the Abu Ghraib prison began to settle into their roles as authority figures and abused the prisoners in order to show their power and dominance.

How do social roles and the environment affect behavior, attitudes and beliefs?. (2016, Mar 06). Retrieved from http://studymoose.com/how-do-social-roles-and-the-environment-affect-behavior-attitudes-and-beliefs-essay 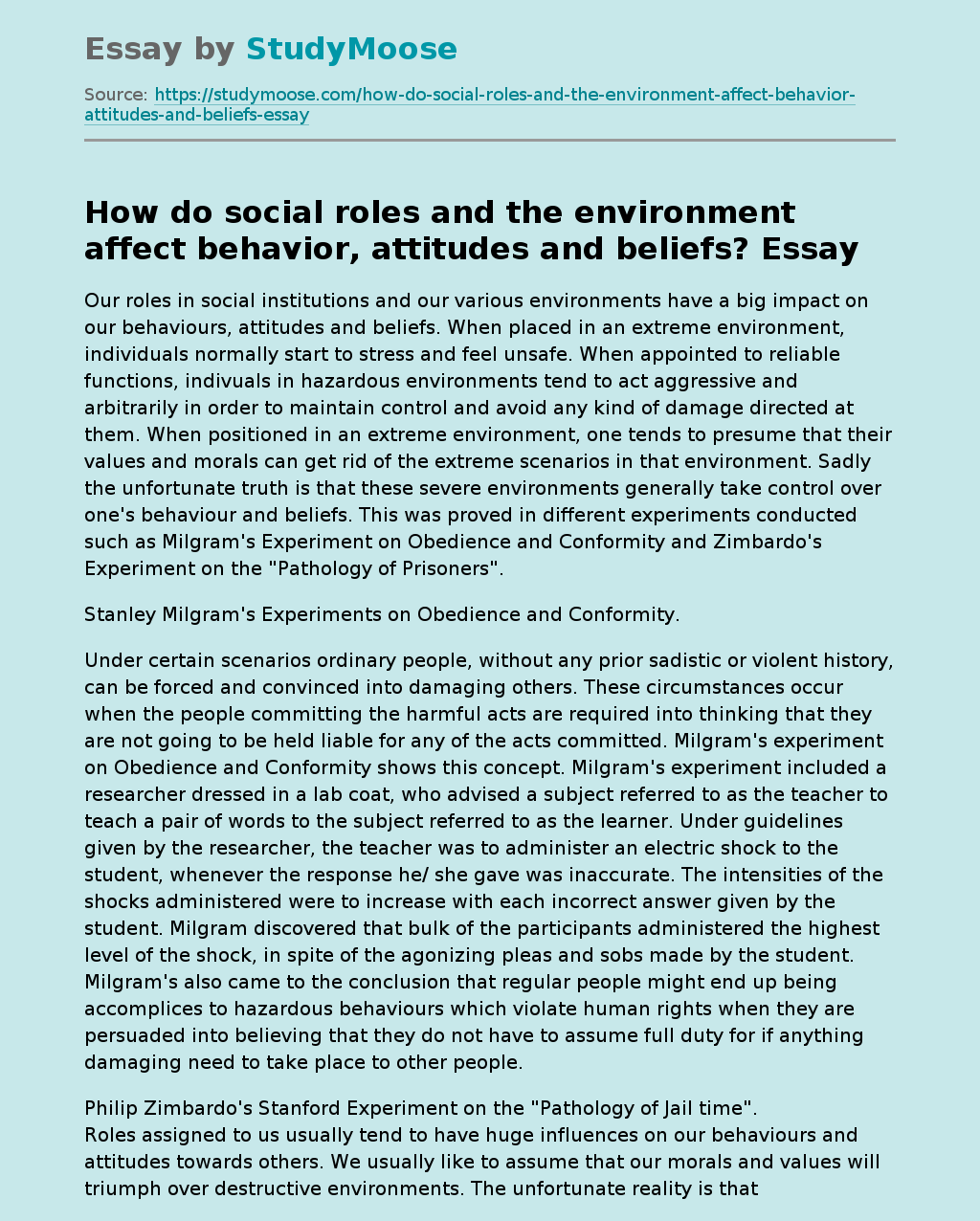