How animal behavior affects the environment

Don't use plagiarized sources. Get your custom essay on
“ How animal behavior affects the environment ”
Get custom paper
NEW! smart matching with writer

Environment flexibility allows animals to change environments that might not have supplied all the right things the animals needed for survival.

This also allows animals to adjust to these changes in their lifetime. An example of an Animal’s behavior due to its environment is when Bears hibernate. Bears hibernate because where they live can get really cold and food it scarce due to such cold weather. Weeks before a bear starts its hibernation it may eat twice its weight so when they go into hibernation they will have plenty of nutrients to sleep for such long periods of time.

There are different levels of this though and some animals might have a higher level of consciousness than others.

Higher levels of consciousness can allow animals to think about their past and make plans for their future. For example, when Jane Goodall was studying chimpanzees she noticed that when chimpanzees are aggressive towards another member of the same group it can cause the individual to leave after multiple attacks. This shows that animals can remember things from their past. Humans have larger brains than most animals but the portion of our brain devoted to smell is usually smaller. For example, the land animal with the best sense of smell is a bear with a sense of smell 5 times greater than humans despite their brains totaling just a third of our brain.

However, the exceptional sense of smell of some animals is not only due to differences in brain anatomy but also due to differences in their noses. Why is an animal’s migration such an important instinct for an animal’s behavior? Animals migrate to find a better suitable environment for their conditions. For example, the Emperor penguin migrates to reach the breeding ground. Some other animals might migrate due to weather changes or lack of food. Migrating is seasonal and it’s a common feature in the animal kingdom. When animals migrate they are not distracted by food or rest. Often animals navigate in migration by using the stars, and then they use the memory map to navigate long distances. Seasonal migration usually has to do with the weather and migration that is dependent on that time of year. A Lot of different animal species will migrate to warmer locations during the winter. Another example of animal migration is when birds fly south for the winter because it is warmer in southern states then in northern states. Why do male animals fight over access to female animals and not the other way around? Some female species require the protection of a male to stop other males from harassing her and her young.

For example, elephant seals mate and raise their young on a beach. The males will fight to maintain this territory. Females will choose to spend their time in a male’s territory so they can raise her young in peace and not be harassed by other males trying to mate with them. On the other hand, some species, such as elephants don’t fight to maintain territories but they do fight to establish a dominant relationship. For example, the dominant male bull elephants are able to mate in peace without being harassed by other male bull elephants of a lesser rank. Females also choose to mate with the dominant male bull elephant for the same reason. Animals are biologically programmed to ensure that their offspring survive. Sometimes it’s by dominance and territory or sometimes it’s by laying as many eggs or impregnating as many females as possible. Since no pressure is placed on females to fight for territory or dominance the males will end up getting larger over time and the females will stay the same size. How do the different types of animal behaviors compare to each other?

Animals are biologically different from each other and this creates very different behaviors. Some animals stay together in groups while others stay alone a lot of the time. It all depends on its environment, genes, and how it was raised. Animals will stay in groups usually to avoid getting eaten by predators some even team up to take down predators thats are bigger than them. It can also help minimize stress and maintain food. An example of an animal that travel with its kind is Wolves. Wolves travel in packs because they hunt together, mate, and produce more offspring within the pack. On the other hand, some animals are very solitary which means they like to be alone. The cause of this could be because they are territorial and do not like the company of another animal in their territory especially an animal of their own species.

How animal behavior affects the environment. (2021, Dec 02). Retrieved from https://studymoose.com/how-animal-behavior-affects-the-environment-essay 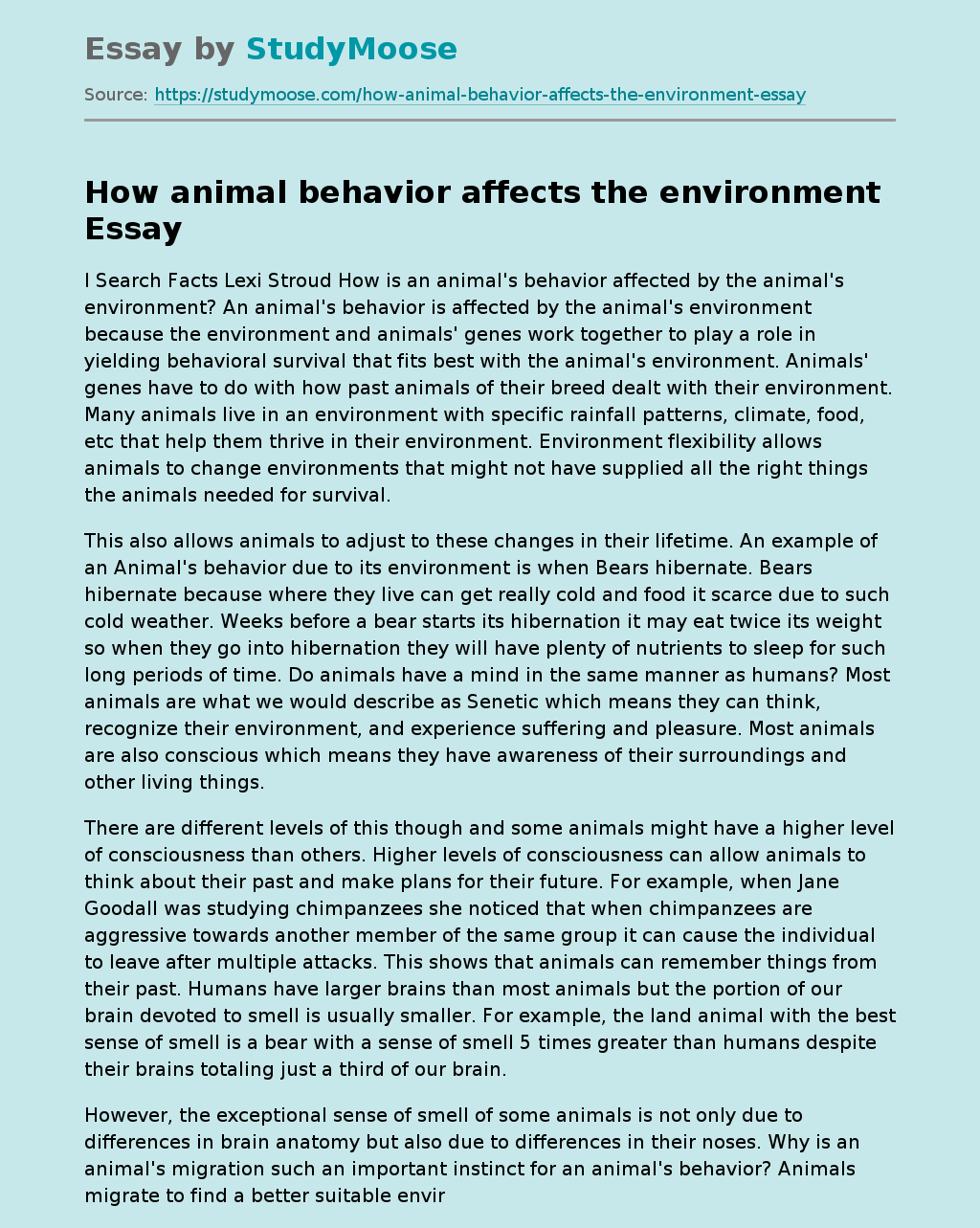