How did Hitler gain power in Germany by 1933?

Don't use plagiarized sources. Get your custom essay on
“ How did Hitler gain power in Germany by 1933? ”
Get custom paper
NEW! smart matching with writer

They did not want to be ontrolled by a dictatorship which would lead them into a communist country. Another factor that assisted Hitler to gain power in Germany by 1933 was how Hitler wanted to demolish the Treaty of Versailles. This is a long term factor as it was enforced after wrw’l, to penalize Germany. The Germans hated the Treaty of Versailles and Hitler accused the communists, Jews and the Weimar Government for being responsible.

This was an advantage for Hitler as he promised to destroy the Treaty of Versailles.

This factor is political as it involves the Weimar Government; it is also conomical as the Treaty of Versailles was the foundation for Germany undergoing depression, however this is also a social factor due to the fact that Hitler told the German people that he would get rid of the TOV. This factor clearly links to the Wall Street Crash and Great Depression, because if the Treaty of Versailles was never emplaced Germany would never have undergone the great depression.

The depression of 1929 created poverty and unemployment, which made people angry with the Weimar government.

People lost confidence in the democratic system nd turned towards the extremist political parties such as the Communists and Nazis during the depression. This is a short term factor that helped Hitler gain power by 1933. On Tuesday 29th October 1929, the American Stock Market, Wall Street, crashed. As a result, 659 banks crashed in America in 1929, 1352 in 1930 and 2294 in 1931. America recalled loans from Germany that had been negotiated under the Dawes Plan (1924). Germany now had to pay back these loans and had to pay reparations.

Without the Great Depression, it is unlikely that Hitler would have risen into power. This unexpected event which Hitler ad no control over was one ot the most important reasons why he became chancellor. This factor is economical as Germany had to pay E6. 6 billion in reparations; however this is also social as 6. 1 million people were unemployed in Germany. This factor links in to elections as without the Wall Street crash Hitler would have never had been able to blame the Weimar government. So now we look at how the elections helped Hitler rise to power in Germany.

This is another short term factor. By July 1932 Nazis gained 230 seats in the elections. Hitler demanded position of chancellor, the only way Hitler was able to force Hindenburg nto making him chancellor was taking advantage of the Reichstag Fire which was to warn of a communist revolution. Hitler decided to pass the Enabling Act which made him dictator; however this also meant that Hitler could now pass laws without the approval of the Reichstag. When Hindenburg died in 1934 Hitler took his place and therefore had unquestioned and unchallenged control.

Hitler would deliver speeches to German audiences in halls or sport stadiums. Groups such as the S. A and Hitler Youth gave sense of belonging and pride to all the Nazi’s audience. This factor is a social factor as it involves all groups of people to support and vote for the Nazi party. This factor links to Hitler’s ideas due to the fact that once Hitler’s ideas were emplaced he needed to appeal to the audience. Hitler’s ideas were a key importance of what made his party strong. The Nazi programme appealed to all sections of society.

Some of Hitler’s main ideas are: National Socialism, Racism, Living space and strong government. This is a long term factor as it must have been time consuming for Hitler to rein validate his ideas. This is political as Hitler enforced his ideas into the Nazi party programme. This factor links to propaganda as Hitler needed propaganda to get his message and ideas cross. The use of propaganda helped Hitler gain power in Germany by 1933; it is long- medium factor as it took time to Dr Josef Goebbels was responsible for propaganda from 1928 onwards.

Posters, Radios, Newspapers and Rallies got messages across to large numbers of people. A very popular poster that was used is: “Arbeit una Brot” (work and Bread) made more people vote for the Nazis. This is because of the enormous amout of unemployment which is linked to the Wall Street Crash’. This is political as all types of propaganda used included a political message. The last factor is Hitler’s personality and skills. This helped as Hitler had a lot of determination and selt – b t Hitler’s personality also involves aggression and competitiveness.

One main skill Hitler was great at was public speaking. This was a very important skill which Hitler had discovered due to the fact that without this no one would listen to him which would mean that possibly he would have never got into the position he did. This is a long term factor as Hitler must have been developing his public speaking skills most of his life. This factor is social as it is a speaking skill; however this is also political as Hitler used his skill to involve himself n German politics.

To conclude I believe that the most important factor that helped Hitler gain power was the Wall Street Crash – Great Depression. This is because in my view I think that without the Great Depression the Nazis would never have been able to blame the Weimar Government for not being strong, therefore the Nazi party would not be able to gain control. On the other hand critics could argue that no matter how many seats the Nazi party gained, it wouldn’t matter because Hindenburg was the only person that could appoint Hitler as chancellor. 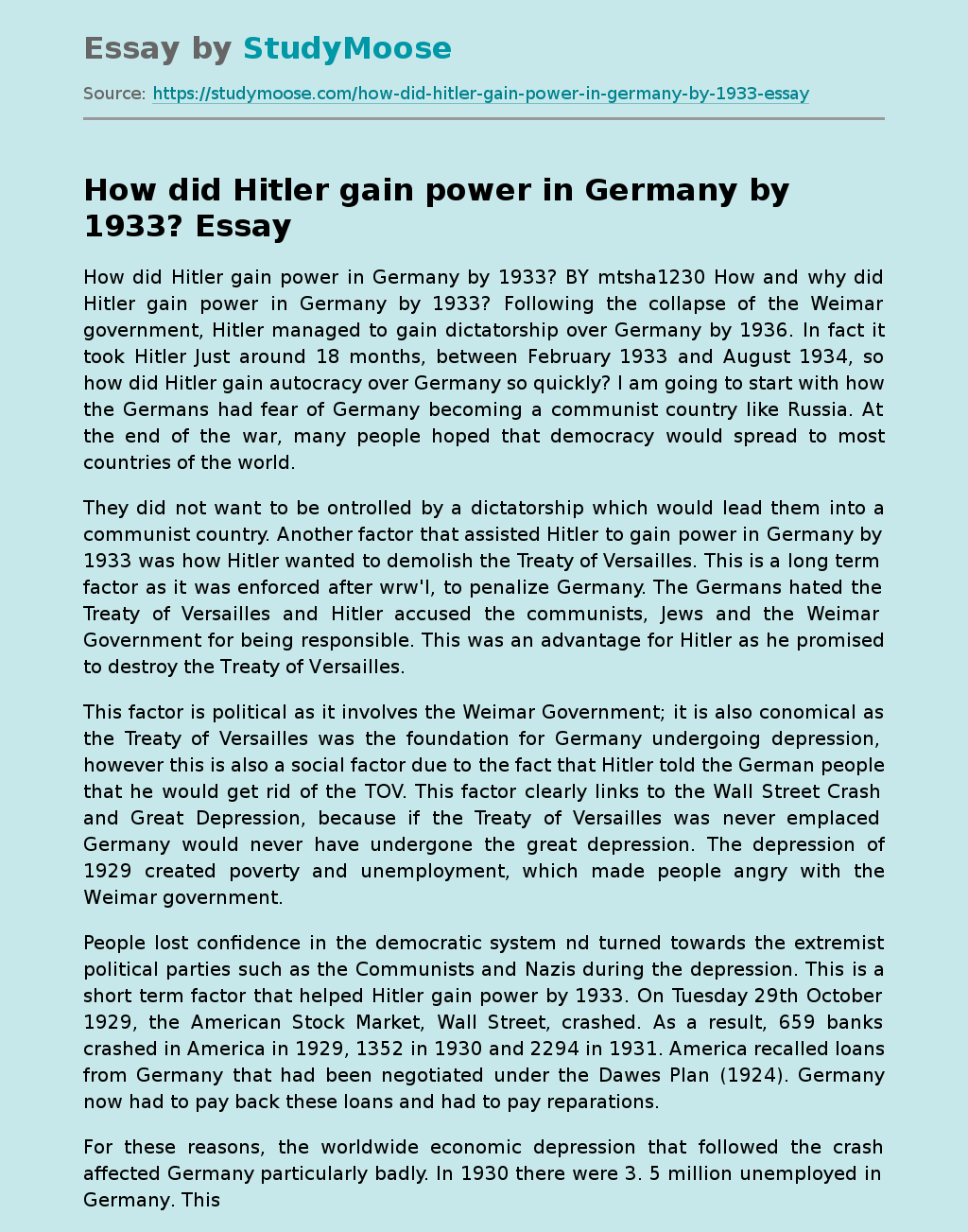