How childhood is socially constructed?

When asking ourselves the question ‘what is childhood? ’ and reading around the subject, it can be seen that there is no exact definition which can pinpoint an exact answer, this is because childhood is seen as socially constructed (McDowell, 2010). Continual varying ideas about children which has led to claims that childhood is a social construction highlights that childhoods are not the same everywhere and that while all societies acknowledge that children are different from adults, how they are different and what expectations are placed on them, change accordingly to the society in which they live (Greene et al, 2005).

Don't use plagiarized sources. Get your custom essay on
“ How childhood is socially constructed? ”
Get custom paper
NEW! smart matching with writer

This highlights that it is not possible for childhood to be a biological state but is culturally specific and varies across time and location including taking into account economic factors (McDowell, 2010). This can be seen here in the contrast of how children are portrayed and look in western society compared to non-western. Children in Africa (non-western) Let the children play (Western)

This view of social construction is supported in Bronfenbrenner’s sociocultural model of development which highlights how different environmental systems impact human development.

The interrelated systems help us recognise the different contexts which impact on childhood (McDowell. 2010) Aries (1962) claimed that in medieval society the idea of childhood did not exist as the child did not occupy a social status (Green et al, 2005). This is argued by Archard (1993) as cited in Green et al (2005) who had the belief that they just had different ideas about it.

This contrasts with the western society view of today which places children at centre stage taking on the romantic discourse that children are and have always been pure and innocent and entitled to nurturing (Newman, 2004).

A loving family This picture highlights how the western perspective sees childhood, placing the child as central importance. Ideas about children and childhood also differ between different sectors in society, professional bodies and government departments which have come to be manifested in social policies.

An example of this is age restraints. Legal classification of childhood is the main way in which society attempts to regulate and define childhood (McDowell, 2010). Age restraints for events in life such as marriage, the right to vote or drink, the school leaving age, ages in which you are criminally responsible and the age of sexual consent have developed over time but various legal constraints give children or young people different levels of responsibilities or how they should control their own actions which vary globally (Greene et al, 2005).

Cunningham (2006) believes that a child can cease to be one over time which relates to age limits and laws but we are always a child to our parents. Western society, in particular its social policies, tends to focus on what children will become, rather than children’s being. The focus is on what they will become in the future rather than the here? and? now of childhood (Morrow, 2011). In many developing world countries however, children’s roles are very different. There is more crucial importance of children’s labour to many household economies (Morrow,2011).

In some countries, child labour is prevalent and, for many children, education has to fit around work commitments. This contrasts with the developed West, where children’s work has to fit around their education commitments. The priorities for children are different, and thus their ‘childhoods’ are different. (Morrow, 2011). Overall it can be seen that there is no agreed definition of childhood without reference to the social perceptions within which it is experienced.

How childhood is socially constructed?. (2016, Jul 03). Retrieved from https://studymoose.com/how-childhood-is-socially-constructed-essay 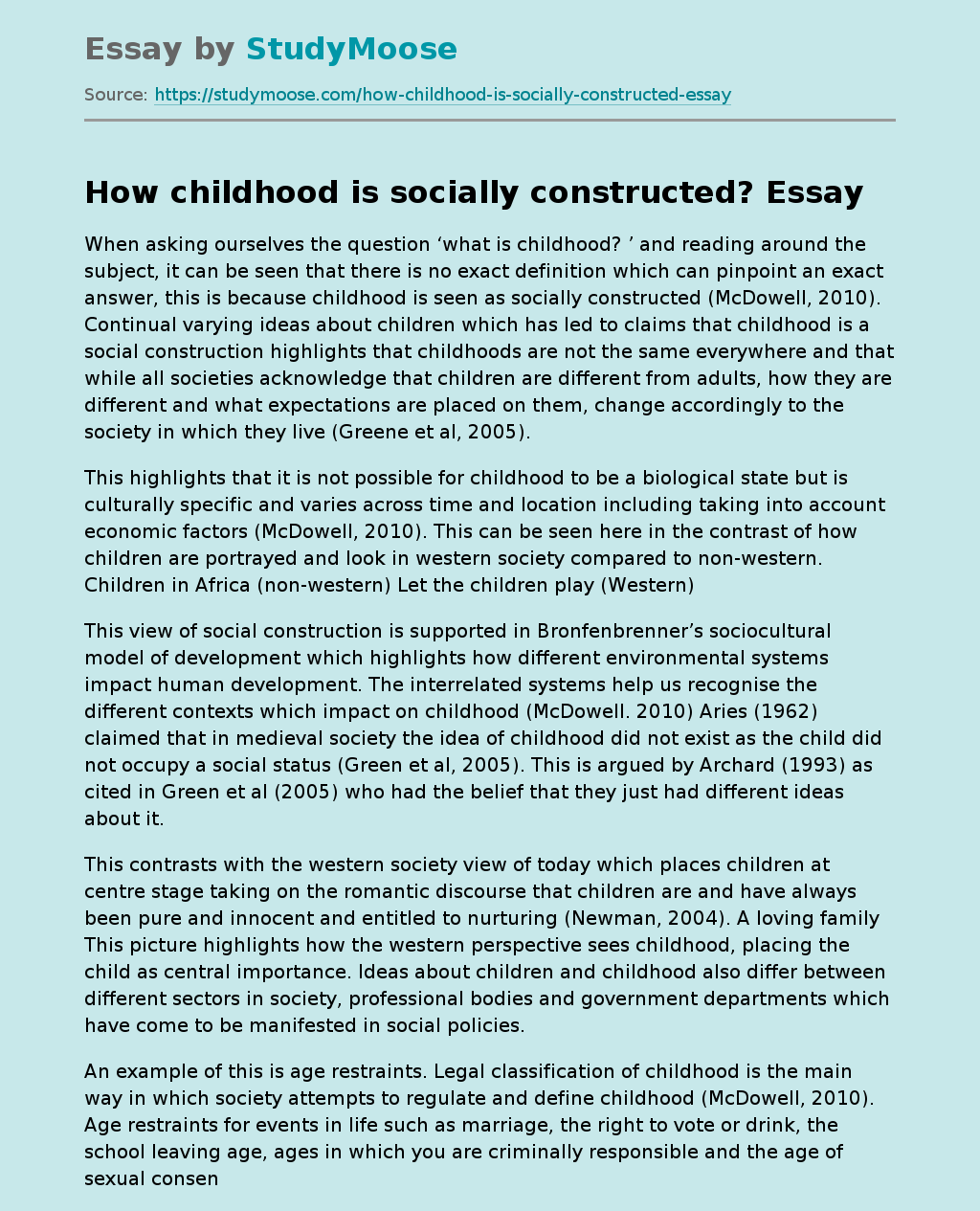