Effect of Inequality on Access to Socially Valued Resources

Equality often implies an equality of opportunity to access what society has to offer. Typically this includes access to socially values resources, such areas as health, education, employment opportunities and political representation. Over the years, Australian society has been described by people as a “working man’s paradise, ‘the land of the fair go’, and an egalitarian society. However, there has been evidence of inequality of groups such as the indigenous, the disabled, and gender issues, where differences to access of socially valued resources highlight the disadvantages that these groups in society face.

Turn in your highest-quality paper
Get a qualified writer to help you with
“ Effect of Inequality on Access to Socially Valued Resources ”
Get high-quality paper
NEW! AI matching with writer

This disadvantage has implications of a life dominated by social and economic disadvantage, where quality of life, opportunities and possible future outcomes are all less that those who live in wealthier areas and higher incomes and higher status jobs.

An inquiry into Australia’s health in 1994 revealed that indigenous Australians were 3 times more likely to die of childhood diseases and were 15 to 20 years more likely to die earlier that other Australians. Indigenous people were nearly twice as likely as member of the general population to live outside urban centres and are more likely to live further from a range of health services and facilities. This statistics highlight the lack of access to health systems leading to health problems and death. In addition to facing a range of cultural and communication barriers, they face particular issues, such as dispossession and the ‘stolen generation’ which placed them in a uniquely disadvantaged position.

Although there has been funding from the government to try and improve the conditions of life for the Indigenous, according to the ABS only 3% of Indigenous people in NSW were attending a university or other tertiary institution. There was also only 44% of young Indigenous people in NSW that were attending an education institution which came from the 1996 census. From the SMH article ‘Vanstone admits indigenous money has been wasted’, it is evident that access to education may improve the future equality for indigenous, where there is a need to encourage education in Indigenous communities rather than spend $3 billion each year on services and programs that Indigenous people did not acknowledge they had access to because of the lack of education.

Women in Australia have achieved more equality in life than Indigenous Australians because of their political power. They represent 50.6% of the NSW population according to the 2001 census and therefore have a strong voice in society. The Sex Discrimination Act 1984, highlight the feminist movement for gender equality in Australia. Although women have more equality compared to the indigenous group, they suffer disadvantage in comparison with men. In August 1998 according to the Department of Women (NSW), women’s average weekly earnings were 79.83% of men’s. They were also more likely that men to work unpaid overtime.

Although statistics from Gender Equity: a frame work for Australian Schools 1997, show that girls have outperformed boys for the last 13 years on the bases of mean TER scores, women have had limits in achieving and reaching top positions in society, which is described as the ‘glass ceiling’ theory. According to the SMH article ‘affirmative: the glass ceiling is still firmly in place’, results from the 2004 Australian census of women in leadership revealed there had been no change in the number of women in chief executive positions and there was still only four in Australia. However, due to the woman’s collective strong voice in society, there is hope that the future prospects will change even more and become much more the same as the quality of life for men.

Another group in Australian society facing difficulty in achieve better access to socially valued resources is the disabled. Similar to the Indigenous, they are one of the most disadvantaged groups due to their lack of political voice in society. In 1998, 3.6 million people in Australia were identified by the Australia Bureau of Statistics as having a disability. Of those with a disability, 78% experienced restriction in core activities (communication, self care and mobility), schooling or employment. It was also identified in 1998 that the median gross income of people with a disability was less that half than that for people without a disability. People with intellectual disabilities were more likely to have poor education outcomes and thus have little knowledge of their rights, obligations or where to seek assistance.

They also have more limited access to employment opportunities, a greater likelihood of being dependant on income support payments, and may have a history of multiple or inappropriate placements in care. The argument in Australia has been about the cost of providing accommodation in community style homes for the mentally disabled, rather than large old style institutions. Frequently deprived of any political power or effective lobbying, the mentally disabled have difficulty in having their viewpoint heard.

As Australian society become increasingly secular, philosophical questions such as ‘should we support our weak?’ are ignored. It is impossible to have a total egalitarian society. However, no one is saying that all people should actually possess equal resources, but rather have equal access to socially valued resources. If we are to be a “fair go’ nation, society must look of ways to reduce inequality, prejudice and discrimination. Although the likelihood of women to gain more equal access to socially valued resources are high, the likelihood of Indigenous and the disabled is less because they are minority groups, and this leads to lack of political voice in the system. Through looking at different groups in society, we can see the effects of inequality to socially valued resources through their experiences and quality of life.

Effect of Inequality on Access to Socially Valued Resources. (2016, Jul 07). Retrieved from https://studymoose.com/effect-of-inequality-on-access-to-socially-valued-resources-essay 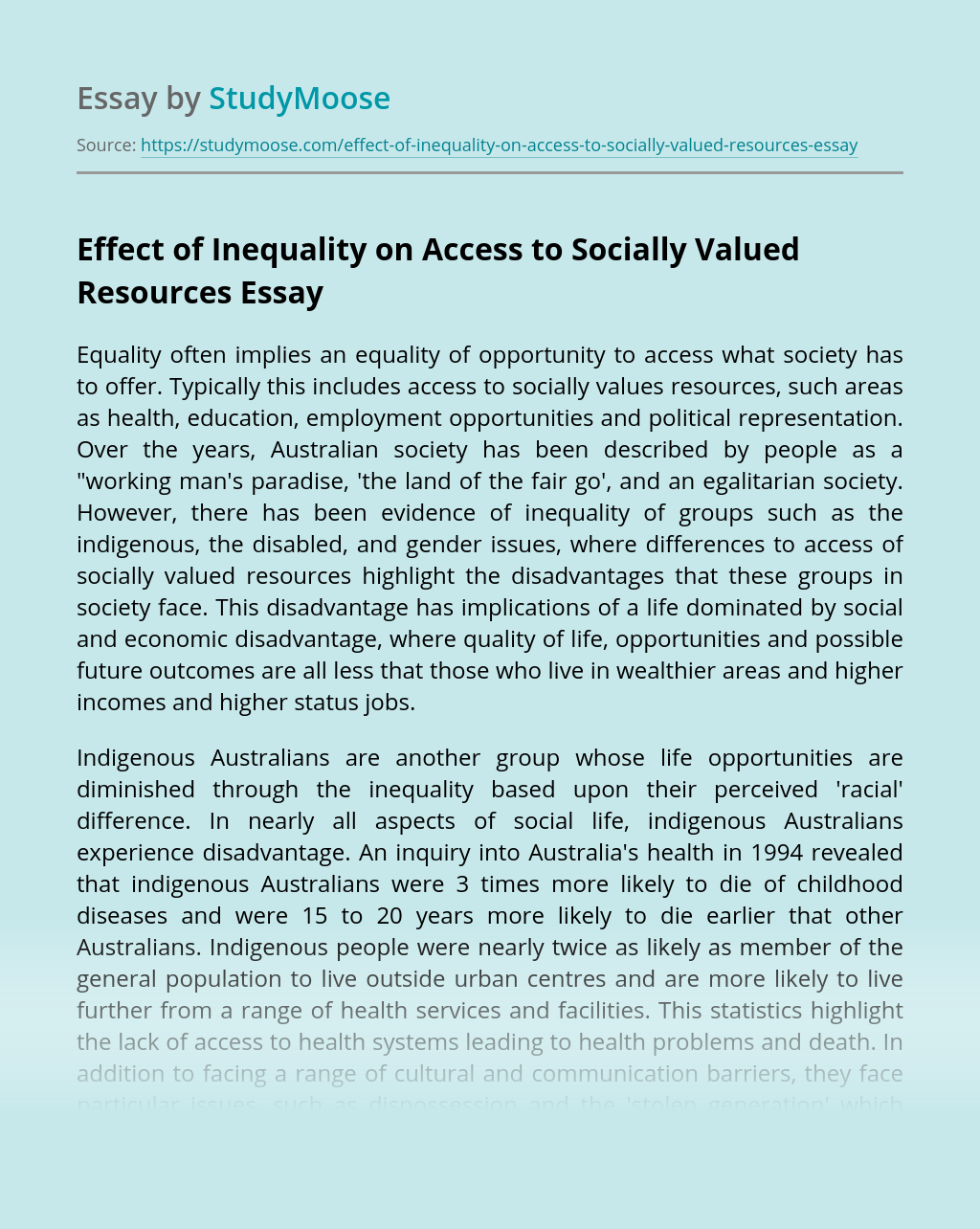 Turn in your highest-quality paper
Get a qualified writer to help you with
“ Effect of Inequality on Access to Socially Valued Resources ”
Get high-quality paper
Helping students since 2015
Stay Safe, Stay Original