Onset dates and prevailing wind currents of the southwest summer and northeast winter monsoons. Regional variation in rainfall across India. The monsoon season delivers four-fifths of the country’s precipitation. The southwest summer monsoon, a four-month period when massive convective thunderstorms dominate India’s weather, is Earth’s most productive wet season. [31] A product of southeast trade winds originating from a high-pressure mass centered over the southern Indian Ocean, the monsoonal torrents supply over 80% of India’s annual rainfall. 32] Attracted by a low-pressure region centered over South Asia, the mass spawns surface winds that ferry humid air into India from the southwest.

Don't use plagiarized sources. Get your custom essay on
“ Monsoon Season Issues ”
Get custom paper
NEW! smart matching with writer

[33] These inflows ultimately result from a northward shift of the local jet stream, which itself results from rising summer temperatures over Tibet and the Indian subcontinent. The void left by the jet stream, which switches from a route just south of the Himalayas to one tracking north of Tibet, then attracts warm, humid air. [34]

The main factor behind this shift is the high summer temperature difference between Central Asia and the Indian Ocean.

[35] This is accompanied by a seasonal excursion of the normally equatorial intertropical convergence zone (ITCZ), a low-pressure belt of highly unstable weather, northward towards India. [34] This system intensified to its present strength as a result of the Tibetan Plateau’s uplift, which accompanied the Eocene–Oligocene transition event, a major episode of global cooling and aridification which occurred 34–49 Ma. [36]

The southwest monsoon arrives in two branches: the Bay of Bengal branch and the Arabian Sea branch.

The latter extends toward a low-pressure area over the Thar Desert and is roughly three times stronger than the Bay of Bengal branch. The monsoon typically breaks over Indian territory by around 25 May, when it lashes the Andaman and Nicobar Islands in the Bay of Bengal. It strikes the Indian mainland around 1 June near the Malabar Coast of Kerala. [37] By 9 June, it reaches Mumbai; it appears over Delhi by 29 June. The Bay of Bengal branch, which initially tracks the Coromandal Coast ortheast from Cape Comorin to Orissa, swerves to the northwest towards the Indo-Gangetic Plain. The Arabian Sea branch moves northeast towards the Himalayas. By the first week of July, the entire country experiences monsoon rain; on average, South India receives more rainfall than North India. However, Northeast India receives the most precipitation. Monsoon clouds begin retreating from North India by the end of August; it withdraws from Mumbai by 5 October. As India further cools during September, the southwest monsoon weakens.

By the end of November, it has left the country. [34] Pre-monsoon clouds, as they appear in Mumbai, western Maharashtra. Monsoon rains impact the health of the Indian economy; as Indian agriculture employs 600 million people and composes 20% of the national GDP,[38] good monsoons correlate with a booming economy. Weak or failed monsoons (droughts) result in widespread agricultural losses and substantially hinder overall economic growth. [39][40][41] The rains reduce temperatures and replenish groundwater tables, rivers, and lakes. edit] Post-monsoon During the post-monsoon months of October to December, a different monsoon cycle, the northeast (or “retreating”) monsoon, brings dry, cool, and dense Central Asian air masses to large parts of India. Winds spill across the Himalayas and flow to the southwest across the country, resulting in clear, sunny skies.

Though the India Meteorological Department (IMD) and other sources refers to this period as a fourth (“post-monsoon”) season,[22][43][44] other sources designate only three seasons. 45] Depending on location, this period lasts from October to November, after the southwest monsoon has peaked. Less and less precipitation falls, and vegetation begins to dry out. In most parts of India, this period marks the transition from wet to dry seasonal conditions. Average daily maximum temperatures range between 28 °C and 34 °C (82–93 °F). The northeast monsoon, which begins in September, lasts through the post-monsoon seasons, and only ends in March, carries winds that have already lost their moisture while crossing central Asia and the vast rain shadow region lying north of the Himalayas.

They cross India diagonally from northeast to southwest. However, the large indentation made by the Bay of Bengal into India’s eastern coast means that the flows are humidified before reaching Cape Comorin and rest of Tamil Nadu, meaning that the state, and also some parts of Kerala, experience significant precipitation in the post-monsoon and winter periods. [15] However, parts of West Bengal, Orissa, Andhra Pradesh, Karnataka and North-East India also receive minor precipitation from the northeast monsoon. 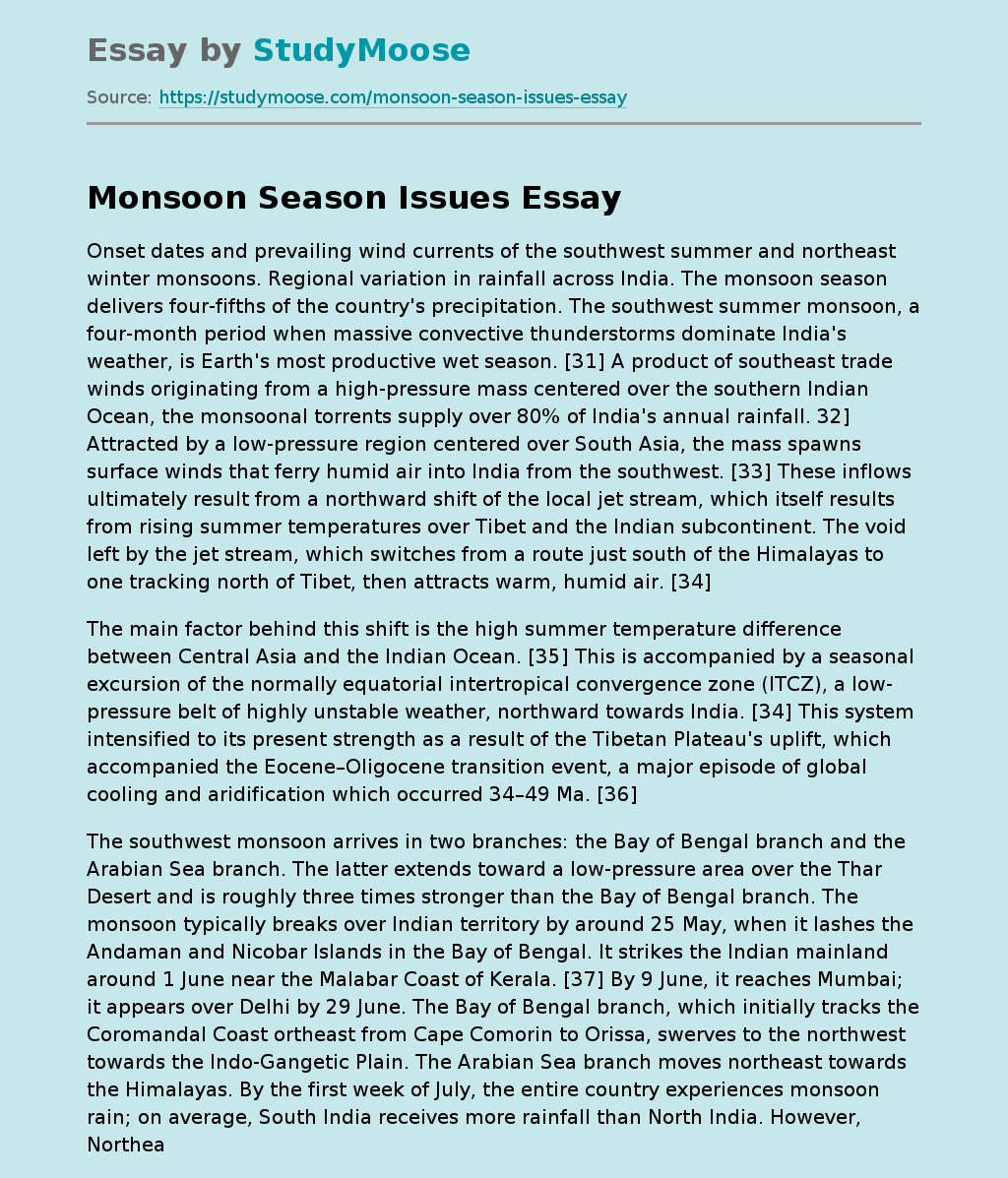