In July 1989, Mr. Oscar Mendoza, owner of Triumph Tours read in the newspapers an advertisement for the leasing of Hotel Continental’s facilities. During the last six months, Oscar Mendoza has been seriously thinking about operating a hotel to complement his travel agency business. Oscar Mendoza had been experiencing difficulties in getting hotel accommodations for his tour groups since last year during the peak travel months of December, January, July and August.

Turn in your highest-quality paper
Get a qualified writer to help you with
“ Hotel Continental Case Study ”
Get high-quality paper
NEW! AI matching with writer

It has three function rooms that can seat twelve to forty persons, a coffee shop, a fast food cafeteria, a formal dining room and a swimming pool. During the last two years, the hotel incurred losses of about P2 to 3 million pesos which led management to the decision of leasing out its facilities (See Exhibit A).

The room capacity of the hotel is just right for Triumph Tours’ requirements during the peak months.

“My travel business can provide annual capacity utilization of the hotel to as much as 40% only,” Oscar Mendoza told his Marketing Manager, Ernesto de los Santos. “How do we fill up the remaining 60%? Before Cory became President, I read in the daily newspapers that most of these five-star hotels in Metro Manila were underutilized? What led to this situation? Could you gather some data that will help me in deciding whether or not I should bid for Hotel Continental? The data could also help me in figuring the appropriate bid price.

Ernesto de los Santos immediately called his staff after the meeting with Oscar Mendoza. He told his staff to gather raw data related to the hotel industry. “Just give me the data. It’s up to you how you will divide the work. I’ll take care of writing the report for the boss,” he informed his staff.

Several days later, Oscar Mendoza found on his desk a packet of information jointly submitted by two of the five staff members of the marketing department (See Exhibit B). Ernesto de los Santos immediately read the data to see if he could prepare a preliminary report for Oscar Mendoza.

I.
a.) Central Problem

Statement of the Problem:
Oscar Mendoza’s difficulty in getting hotel accommodations during peak travel months

• What would be the appropriate bidding price?
• What factors caused the incurred losses of Hotel Continental and how Triumph Tours can solve the unprofitable event?

• To identify the factors that affect the utilization of hotel facilities. Cite achievable ways on how Triumph Tours will be able to fill up the remaining 60% of Hotel Continental’s underutilized facilities.

• To weigh the advantages and disadvantages of each alternative. In this study, both of the cited strategies will be discussed.

• To come up with the best solution.

ii. It provides better service for his tour groups. Of the fact that Hotel continental can accommodate all his groups and still has about 60% facilities left for utilization.

iii. It allows the agency to accommodate more customers, 40% for the tour groups and 60% for other customers.

v. It can save time instead of looking for other hotels which might end up in failure and Hotel Continental already being leased by other companies, opportunities only come once.

vi. Its room capacity is just right for his tour groups, booming revenues for the travel agency business by satisfying the needs of the tour groups.

i. Hotel Continental has incurred losses for last two consecutive years. Triumph tours is challenged of this event and should come up with the best strategy on how to maximize profits and avoid, if not possible, lessen the amount of losses and in time arrive to a net income by constant recovery and innovative plans.

ii. Only 40% of hotel facilities will be utilized by the travel agency annually, this requires them huge effort to be efficient in their resources and not end up in underutilized utilities.

iii. The location of the hotel is not strategic. There are many competitors at present and also, at future.

iv. More capital is needed. Capital is a vital element of all organizations if one strives to accumulate profits and remain in the competition.

← If Triumph Tours will bid for Hotel Continental, alternatives are:

Advantage: Modernizing facilities and enhancing services would exert a pull on more tourists, increasing hotel occupancy rates, thereby escalating hotel capacity utilization. And also, the fact of a stiff competition among hotels, the action will lead to a more competitive Hotel Continental with which customers can choose from.

Advantage: Based on the income statement of Hotel Continental, a large portion of the losses was due to the huge amounts of operating expenses. If those operations would be done using lesser costs, there would be a significant increase in the income of the hotel.

• Advertise the hotel together with the travel agency’s offers

Advantage: Advertising not only lets people know about the services rendered by the hotel, it also creates the demand for them to avail of its products and services.

Disadvantage: Advertising through a lot of forms of media requires a lot of costs.

• Expand the hotel into a hotel-resort business

Advantage: The conversion of the hotel into a hotel and resort business would not only attract those professional customers, it would also attract both tourists and locals. Since a lot of people are into relaxing vacations, catering to their demands maximizes the hotel’s capacity.

Disadvantage: The conversion of the hotel into a hotel and resort requires a lot of costs and not all ventures into the resort industry succeed.

2. Bid for other hotels

i. There is a possibility of a less bid price. There may be hotels in near bankruptcy or have suffered more losses than Hotel Continental and is leasing their facilities at a much lower price.

ii. There is a possibility that other hotels have not incurred losses. It is not certain but one may find other hotels that are in lease advertisement but have not suffered losses.

iii. It will solve Mr. Mendoza’s problem in getting hotel accommodations for his tour groups during peak months.

iv. It provides better service for his tour groups

v. It allows the agency to accommodate more customers.

vii. There is a possibility that the other hotels are in a strategic location

i. It consumes more time to gather data and to search for hotels in lease, uncertainties may come and either satisfy their business or dissatisfy them.

ii. Room capacity may be too much or too less. Too much may also require additional plans in order to fill up the remaining underutilized facilities and too less might result to unsatisfying services and lower revenues.

iii. There is a possibility of a higher bid price, especially for hotels that have not undergone losses or other problems.

iv. There is a possibility that no other hotels are for lease.

i. Mr. Mendoza can properly address the needs of his tour groups. They can specify their construction according to the estimated needs of their travel agency business and be efficient of their resources (e.g. enough room capacity with 100% utilization of the hotel facilities).

ii. He can choose a more strategic location for his hotel. They have the choice to do whatever they may in order to mold a building that will fit their needs best.

iii. Complete authority over the hotel for hey are the owner.

i. Mr. Mendoza needs most importantly a huge amount of money. Constructing a new building is not easy task, starting from the purchase of land for a strategic location, blueprint and design, construction workers, budget, and so on.

ii. Construction takes time, undergoes many processes. It is not a plan which can be immediately accomplished, it requires months, years to finish.

iii. He bears all the risks. Unexpected calamities, budget shortage, and some ignored minor problems at the start that may become a large hindrance for the finishing of the construction and may affect the transactions of Triumph Tours.

iv. The entity (travel agency and hotel) will be incurring more expenses

4. Continue agency operations without the hotel

i. Mr. Mendoza can focus improvements in his travel agency. Less distractions can lead to more concentration on the transactions of Triumph Tours.

ii. There are only 4 travel peak months in a year.

i. Mr. Mendoza continues to experience difficulties in getting hotel accommodations during travel peak months.

ii. It causes inconvenience to his travel groups. To customers of the travel agency, they may find another travel agency which they think will serve them better because there are many competitors also of Triumph Tours.

We recommend that Mr. Oscar Mendoza of the Triumph Tours bid for Hotel Continental and he must expand the hotel into a hotel and resort business. Also, upon the conversion, he must modernize the facilities of the hotel and he must open newer establishments in the hotel.

Based on the income statement of Hotel Continental from 1987- 1988, a large portion of the operating expenses was due to the Property Operations, Maintenance and Energy Cost. Due to the outdated facilities of the hotel, a lot of repairs and maintenance were done which eventually led to a strain in the hotel’s resources. Modernizing the hotel’s facilities will definitely reduce operating expenses. Also, offering newer and more varied services to the clients would increase the utilization of the hotel’s facilities.

Lastly, the conversion of the hotel into a hotel and resort would attract more tourists and locals, thereby maximizing the capacity of the hotel. Also, the conversion would establish a stable income for the business because it would not only boom in profits during peak seasons of Christmas and summer, it would also offer facilities for professional conferences as well as spas, restaurants, fitness centers among others which are not seasonal in nature. 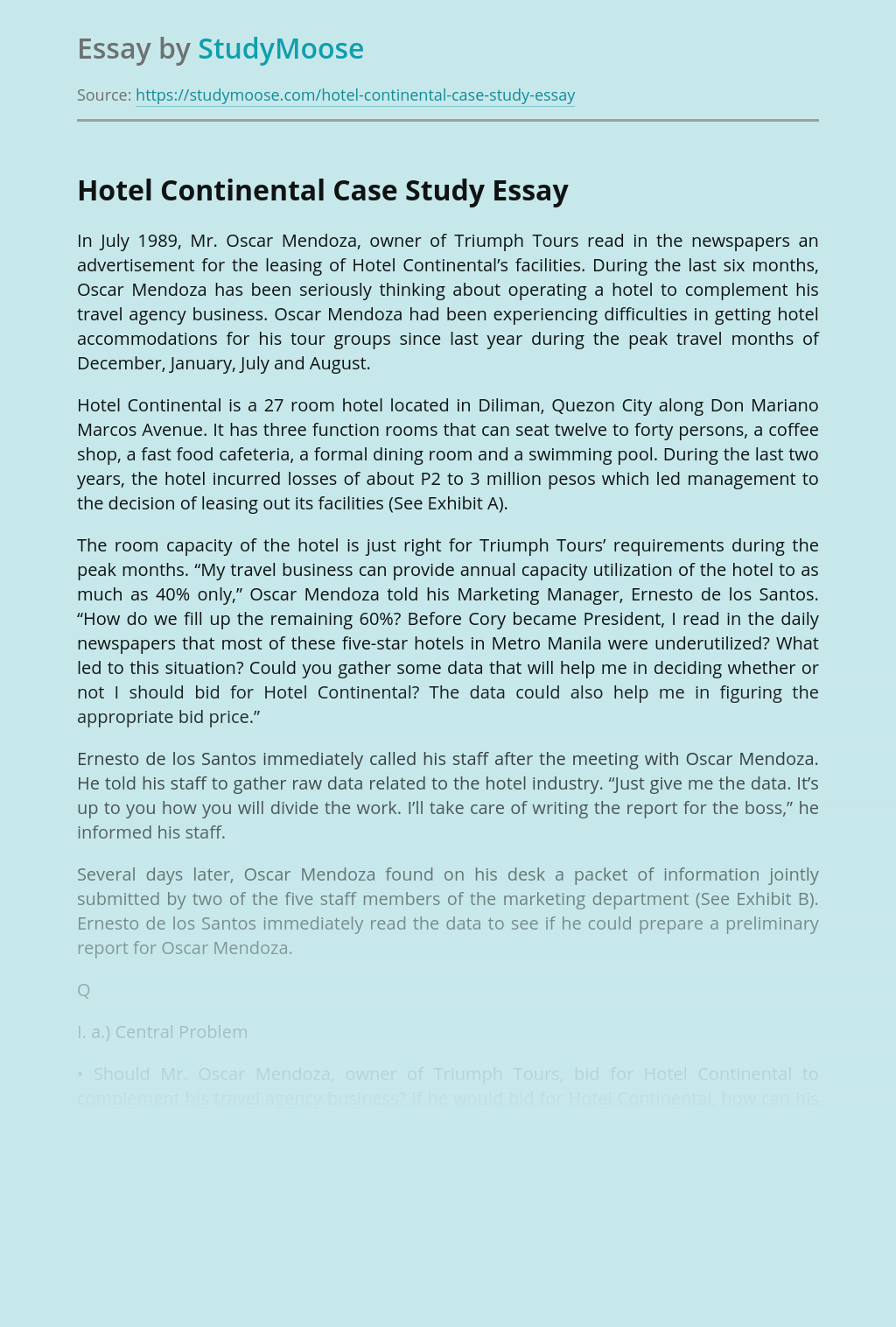 Turn in your highest-quality paper
Get a qualified writer to help you with
“ Hotel Continental Case Study ”
Get high-quality paper
Helping students since 2015
Stay Safe, Stay Original