Many people love to watch horror movies with their families. Theaters and on a television that excites you, which brings a flow of scary movies. Watching horror films brings you frightful flicks that appears in your dreams. It can be very unpleasant after watching horror films because nightmares cause anxiety and sleep disorders. Both adults and children have sleeping disturbances. More than likely you’re afraid or terrified from experiences awful nightmares. Impact on an adult’s childhood life developing anxiety will increase.

Don't use plagiarized sources. Get your custom essay on
“ Horror movies ”
Get custom paper
NEW! smart matching with writer

Sometimes people feelings are crucial, horror movies always been the special province of the young. Most likely people squint their faces into frightful frowns, or over hearing a noise then jump. Suddenly both children and adults will start to have terrifying nightmares. Which most adults responds in the shower or flinching of hearing noises. The first horror films unique event in the 1930’s, the people responses was a lot differently; fainting, reliving traumatic experiences, having seizures and even dying from heart attacks.

Throughout the decades horror movies have grown very popular.

It’s regular for a child to have nightmares and having issues going to sleep. Children most likely have anxiety, typically when children are exposed by them at a young age. Children are not aware that what they watch in scary movies it’s not real. Over the time children can become emotionally affect from watching horror movies.

Horror movies can be impact increasing level of anxiety and fear. Children Violence and aggression can effect children who are affected by watching horror movies. Children who playing violent video games may be convinced that what they see will believe that’s okay to use. They lack of ability to sleep through the nights after exposure to scary movies and avoidance in the genres and movies. The results provide that children who like watching thriller and horror movies will be better handle their effects. Which children who are frighten most likely will be affected, significantly higher than the duration for those who sought out the film. 90 percent shown that a frightening reaction from childhood or adolescence, approximately 26 percent may have experience residual anxiety.

Having nightmares or “monsters” in your dreams, parents get very concern for their child. Most likely once you become an adult you will laugh off these momentary fears because they know better. Hearing disturbing sounds and weird noises assuming they heard something, but reacting differently after watching horror films. Adult’s reminiscence without encourage damage and fear from their childhood may cause conditions of stress. Physical reactions to terrifying images can include sweaty palms, tense muscles, a drop in skin temperature, a spike in blood pressure and heart rate increasing. A variety of symptoms you may realize very much is crying and screaming; trembling, shaking and sometimes may feel nausea or having stomach pain, clinging to a companion, 18 percent chance of heart rate increasing, freezing or may feeling of paralysis, sometimes fearful of losing control, as well as a high temperature of fever or chills, sweating, fearful of dying, have shortness of breath, can feel numbness, sense of unreality, and sometimes feeling faintness or dizziness. Experiencing extreme fear is phobia, which is an anxiety disorder. Phobia is normally use at your early childhood caused by watching horror movies. Five different areas that increases anxiety; animals such as mammals or reptiles, environmental of weather such as floods, earthquakes or storms, shows action or physical of blood, injection, or injury such as blood or physical threats to living things, in a situational moment such as being high in the air (heights) in an enclosed space, or restrict locations, and most likely having sleeping disturbance.

Stephen King said,” I think that we’re all mentally ill, those of us outside the asylums only hide it a little better and maybe not all that much better, after all.” Adults and children have different side effects such as, trouble sleeping, a change of attitude, action, or effective emotions. Children might cry and get sick to their stomach, it often impacts when they grow as adult. The potential lyncher is in nearly everyone. Both adults and children, emotions and fears form they own body, and realized they demands are in its own exercise to continue proper muscle tone. Most of these emotional muscles are accepted in civilized society such as Love, friendship, loyalty, and kindness. Your insanity will lead you talking to yourself caused by stressing, such as someone talking to themselves in the shower. It’s develop before they get out of diapers we exhibit these emotions but society showers with very many positive reinforcement. Anticivilization emotions don’t go away at all and demand periodic exercise of sick jokes or may have a surprise. Many people involving children and adults can effect with their sleeping disturbance and anxiety. Myths, non-realistic, fairy tales could respond differently with being in the real world. Horror movies bring a lot of excitement and entertainment among you and your family. Horror movies can cause physical behavior changes in a person by watching the films. The results of watching horror movies shows that is has really effect people whether you’re an adult, teens, and most likely happens during your childhood. 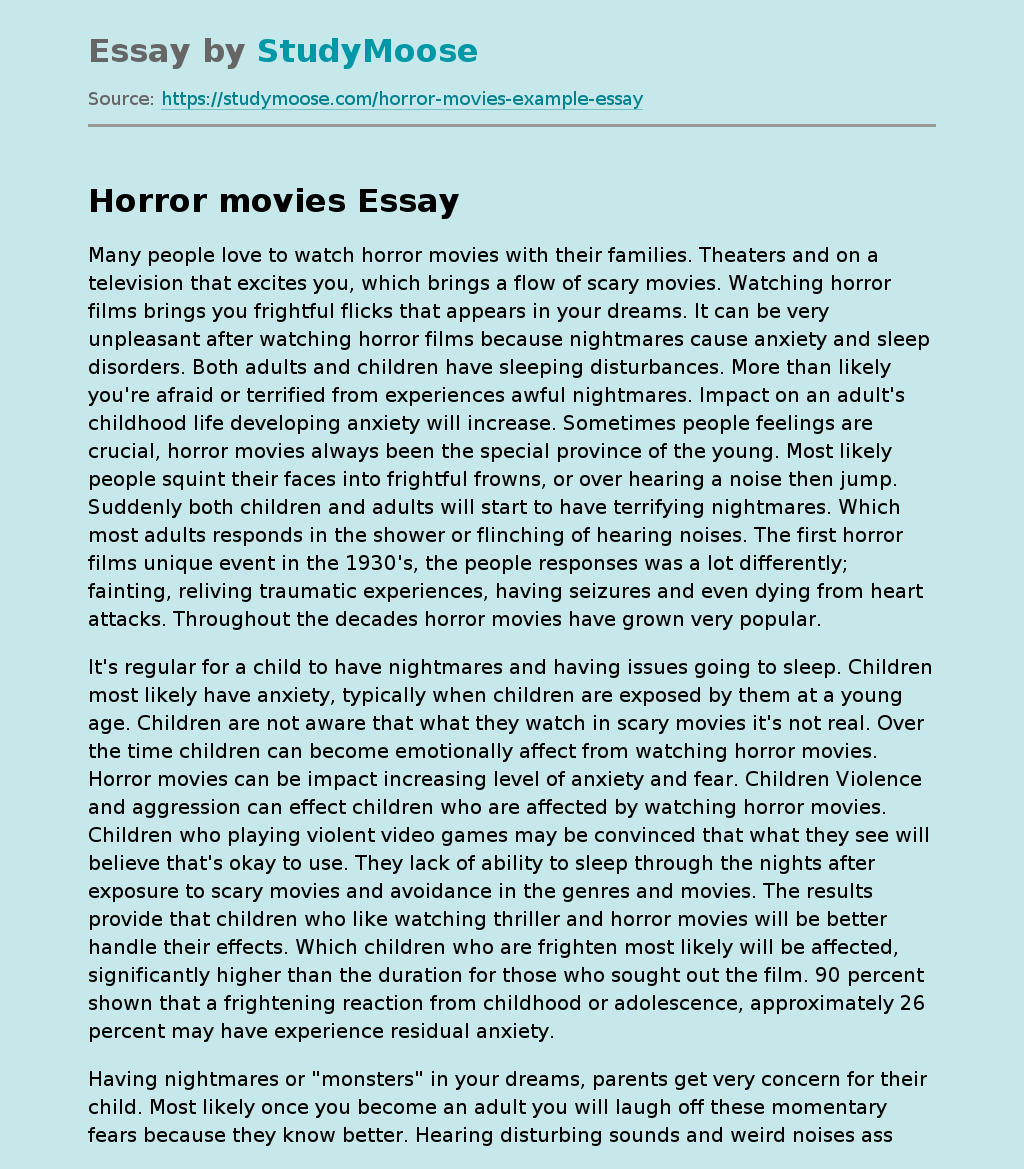