Why we crave horror movies?

Horror movies are not the mere methods of having fun, reliving stress or pressure in life, running away from reality or daring one’s nightmare. Stephen King in his essay “Why We Crave Horror Movies” often reiterates that an individual should be able to express or exercise the violence or insanity inside him. Stephen King also sees to a point that he gives all his feelings and mentions the logic or rational in his reasoning as to why an individual or any other movie goers should take pleasure in watching these modern horror movies.

Don't use plagiarized sources. Get your custom essay on
“ Why we crave horror movies? ”
Get custom paper
NEW! smart matching with writer

Stephen King continually repeats that it is fun and really enjoyable for movie goers to see somebody or someone be brutally punished, inhumanely killed or viciously lacerated. In his essay, Stephen King argues that all human beings are psychologically challenged or mentally ill, in one ways or another, probably like him. This is what he states as why someone who is going to the movie house would more likely pick or watch a horror movie, indirectly stating that modern horror movies have bigger movie sales or better audience shares than other types of movies.

In this manner, an individual sees himself, probably fulfilling his wildest dreams of killing somebody without the consequences. It is as if a kid or a child was just giving a sick joke. We cannot deny the fact the there are some arguments of Stephen King which are true and correct, like when an adult or a professional watches horror movies, he gets to scream on certain parts of the story just like a child might do in the same situation. But it is irrational to think that everybody should be able to exercise the violence, or the mental illness which Stephen King sees it, inside them.

If a child was watching the horror movie and exercises the violence, as depicted or shown in the movie, all throughout his childhood life keeping in mind Stephen King’s statement that it should be regularly exercised, would he be able to live a normal life of a kid? I doubt it. The young mind of a child, or let us say a teenager or a young adult is still prone corruption, and exercising violence may further deteriorate an individual’s values.

When Stephen King points out or agues that watching movies can relive a person’s childish acts or sick jokes when someone watches horror movies, he missed the idea of diversity or variation in terms of ideas. Not everybody shares his same point of view or his idea of reliving your childhood life. What he pointed out is not always the case, for it greatly depends on the person watching the horror movie, or any movie whatsoever, and his principles, beliefs and values in life.

Moreover, Stephen King, as he quoted Lennon and McCartney that “all you need is love” and adds his own statement “as long as you keep the gators fed” (Dornan, 2000). On my point of view, the morality or the personality is divided into two wolves, the one which is good or harmonious and the other which is evil or violent, and you are which wolf wins the battle; that is the one you feed the most. CRITIC ESSAY In the essay of Stephen King, “Why We Crave Horror Movies” there is a certain assertion from the author that the horror movies of our times are a way to release the aggression within the individuals.

Stephen King also shows or states that these horror movies give us a certain adrenaline or blood rush as mixed or coupled with the feeling of pleasure and excitement. He also argues that the modern horror movies can challenge the individual’s nightmares or phobias in life as well as his fears and uncertainties. Of course, these things, a lot of these objects or ideas can be seen or experienced in real life circumstances or conditions.

Unlike Stephen King, I believe that there are more ways to relieve one’s violence such as playing videogames or online pc games which also provides a way to interact with other individuals more than just sitting on the couch or movie seats eating or talking with your seatmate. Moreover, I get a certain adrenaline or blood rush when playing sports such as basketball, taekwondo or any other martial arts or ball games. A way to dare your nightmare would be to strike your neighbor’s mad dog and run for your flesh or your dear life.

Furthermore, in Stephen King’s essay, he points out that horror movies help us to get out of our usual limits or boundaries in life, somewhat loosen up your self in a very stressful civilized society. Also, horror movies in a way lend a hand in considering or understanding things which are ubiquitously seen or observed in our everyday lives. Stephen King argues that emotions should be permitted to experience freedom in any ways possible away from restraints, again stating that it is only the horror movies which can offer such freedom.

If we look at a different point of view, perhaps someone who doesn’t interest himself with horror movies but other technologies such as computer or videogames. Just like the horror movies, computer or videogames offer the same escape from reality. These past time activities give us a ground for reliving our fantasies and wildest dreams through characters, both antagonist or protagonists which can be played by us. We get to decide on the most of the decisions done by the characters. You may even break or disrupt the standards and laws set by reality inside the game.

At a more conservative perspective, there are ways of relieving stress, having fun or a surge of adrenaline in your system that doesn’t require violence or escape from reality. Musicians or other individuals, who are inclined into music, experience all of these emotions when they are on their musical pedestal or during their performances. For me, I know that I am capable of doing anything that sparks or arouses my interest and still maintain the attachment of reality with just a simple push of a button whenever I play videogames.

For me, playing videogames is a better outlet in life than watching modern horror movies. I could always kill somebody in the videogames and curse him with all that I care without worrying or ever thinking of the consequences. SUMMARY ESSAY The famous and renowned writer Stephen King who was born in 1947 and graduated from University of Maine in 1970 created or writes an essay entitled “Why We Crave Horror Movies”. Stephen King starts stating that all of us have “mentally ill” and sometimes, it just so happens that there are some people who can hide it well from the others.

In one way or another, we have met someone “who talk to themselves”, make terrible or dreadful faces at times when they are alone, or they think that they are alone or just simply had phobias over some animals to some distinct places or scenarios, or of death itself. The audience especially the movie goers even “pay four or five bucks” just to experience the “nightmares” which the “horror movies” gives or delivers them in the movie houses, thinking, believing and showing off their courage and boasting that they are not terrified of these things.

Comparing and contrasting horror movies to the “roller coaster”, horror movies moves doesn’t necessarily make you shriek like in roller coaster rides, but both are catered more when an individual is young, and becomes less as he gets old. Through horror movies, which are “innately conservative, even reactionary” can help in brining back an individual’s emotional or personal sense of “normality”. Of course, even the most gruesome transformation of a very fine female character in movies wouldn’t depict that which is the totality of being hideous.

But still, audiences still continue to watch horror movies for pleasure. The pleasure that is attained from being able to watch somebody completely severed or even dies. Horror movies are said to remove the “shades of grey” and gives the individuals, especially the adults or young adults to be more like “children” again, being able to relive the usual “simple, irrational and outright madness” of the past lifestyle. The “outright madness” and its “degree” of course vary from one individual from the other.

It may lead to lunacy that tears bodies apart like the things which can be seen in horror movies or to lunacy that is relieved simply by dealing with your own self which is totally uncreative or downright unenthusiastic, where the former is more preferred than the other in the “best parties”. The “potential lyncher” is definitely inside everybody, consciously or subconsciously that even the most religious or sanctified individuals sometimes have to go insane to release tensions, pressures or stress and in order to hold on or retain the “muscles or the body” which our “emotions and fears” have created.

Moreover, there are some emotions which are appreciated, if not greatly dignified by the so-called “civilized society. ” Emotions considered in this category are “love, friendship, loyalty and kindness,” which are mostly assimilated in literature “like in the verses of Leonard Nimoy”, more than the other emotions. These emotions are more accepted than what have been previously mention as it is further magnified by the society on the values of an individual, more especially during his/her childhood life through giving positive sanctions, whereas the other emotions are given negative sanctions.

But this should not always be the case, for in order for us to live with our fellow men in a more communal way, we must also share their mental illness since these “anti-civilization emotions are already an integral part of the human being that needs to be constantly worked out. Of course, “sick jokes” can provide a way to connect or interact with other people’s insanity, like a gruesome joke about somebody’s missing head. This elucidates why, Horror movies, where emotions or muscles of fear and madness are to be worked out more often, above all receive ‘reactions”, “anarchies” and insurgency “all at the same time” from other people.

The “mythic horror move” just the same as a sick joke, touches that which is “worst in us”, and helps loose from the bounds of innocence. These horror movies serve as the “food” for the savage personalities or beasts within us, controlling them and maintaining their position in the hierarchy of emotion and sanity. As Stephen King ends his novel, he states from an excerpt from Lennon and McCartney that “all you need is love”, then adding his own comment or consent “as long as you keep the gators fed” (Dornan, 2000).

Why we crave horror movies?. (2017, Feb 19). Retrieved from https://studymoose.com/why-we-crave-horror-movies-5-essay 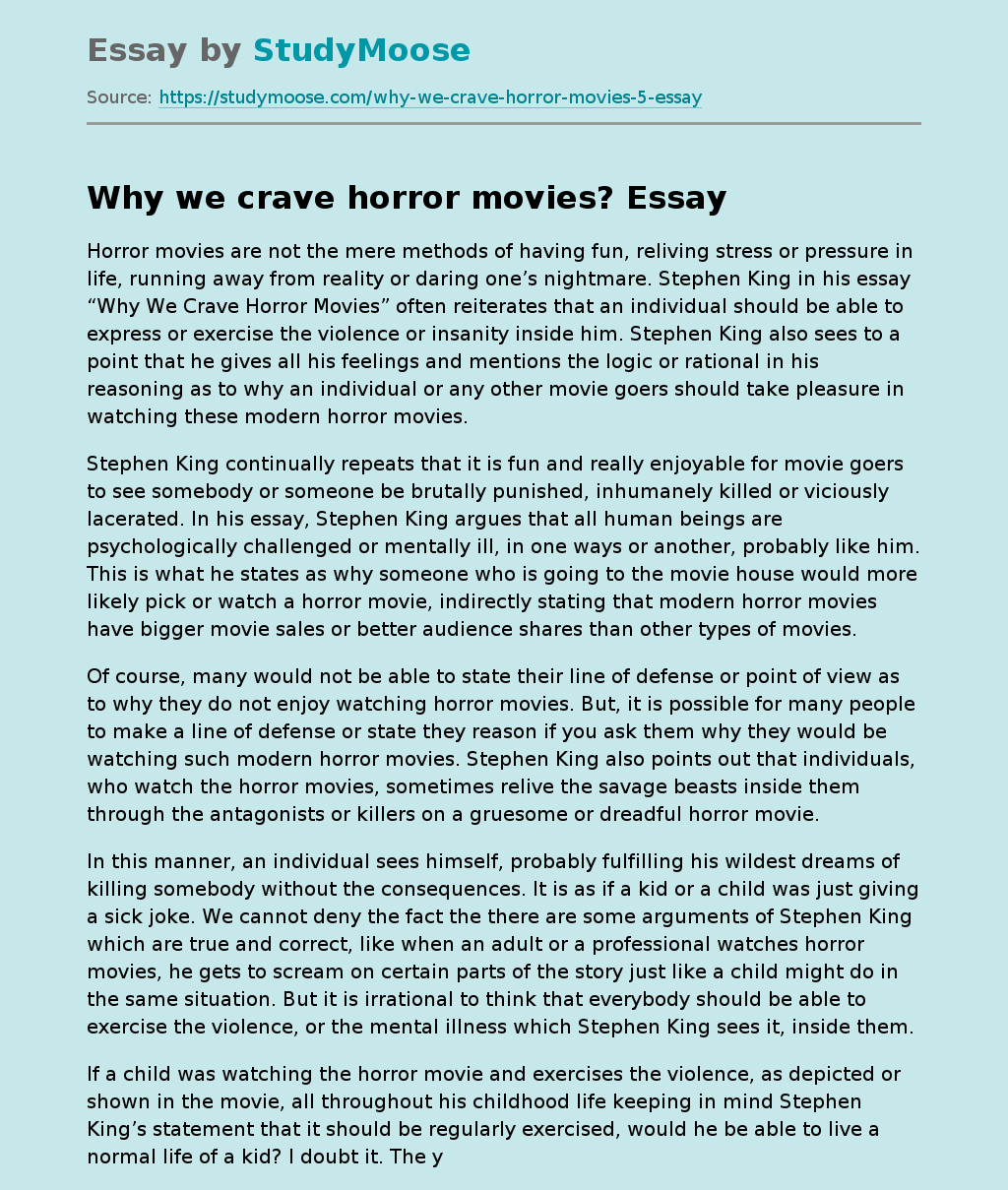