Bees are flying insects that are related to wasps and ants. Those insects are mostly known for their role of pollination and for producing honey and beeswax. There are about 20,000 different species of bees around the world, and every single species of bees live in colonies where there are three types of bees: the queen, the worker, and the drone. However, a lot of scientists and beekeepers noticed since 2006 that the population of bees in world started to decline dramatically.

This strange epidemic happened first in the United States, and it has spread everywhere around the world.

Don't use plagiarized sources. Get your custom essay on
“ Honey Bees ”
Get custom paper
NEW! smart matching with writer

Sometimes, they find some honey left in the hives and babies bees (brood). However, the scientists found a virus-transmitting parasite of Honey Bees in the hives named Varroa mites. Nevertheless, this is not the first time that beekeepers are facing bees’ losses. In the past a lot of scientist had recorded in their note bees’ disappearances around 1880s, 1920s, and 1960s; and the description of those disappearances and symptoms were pretty similar to the CCD, but there are no evidences that shows that it is the same disease.

More recently, in 2000, some colonies of bees disappeared in the Cache Valley in Utah after a hard winter and a cold spring. In 1995-96, some beekeepers in Pennsylvania lost about 53 percent of their colonies without any identifiable cause of this event.

Scientist tried to find the cause of this phenomenon by doing a lot of studies, and they found that the “Coumaphos,” which is a pesticide to treat Honey Bees for Varroa mites, could actually be the cause of bees’ disappearance. This pesticide is made of neonicotinoids that were developed in the mid-1990s because it showed to reduce toxicity to honey bees.

However, in 2008 a lot of bees died in Germany because of the use of neonicotinoids for the use on corn seed. Then, a lot of studies have been done about neonicotinoids and bees, and they all reported that this chemical has a negative impact on honey bees, but those studies did not find any link between this chemical and the CCD. Scientists also found that the Colony Collapse Disorder is not caused by one factor, but by multiple factors.

They found that a lot of bees in colonies are stressed and this is weakening colonies, leading to collapse when the colonies are exposed to additional stress pathogen, parasite, or pesticide. In fact, stress makes weaker the immune system of bees or other insects; and this can make them less social and put the colony in vulnerable situation.

The situation is extremely crucial. In the United States, the Honey Bees population has decreased from 5 million in 1940s to 2.5 million today. The Colony Collapse Disorder is a serious issue for beekeepers. Actually, during the winter of 2006-2011, they lost 33 percent of their bees each year, and a third of these losses are due to CCD. Without them, we will have neither pollination, and practically neither fruits, nor vegetables.

Also based on what said Bernard Vaissiere, who is a specialist in pollination at Inra in Bolivia ” three quarter of the cultures which nourish humanity depend on bees.” Actually Honey bees, were already on earth before men came. Actually, 80 percent of vegetal species need bees for fertilization. More than $15 billion a year in U.S. crops are pollinated by bees, including apples, berries, cantaloupes, cucumbers, alfalfa, and almonds.

The Honey Bees in the United States also produce about $150 million in honey annually, and fewer bees mean lower crop yields and an increase in production costs. Actually, some crops and animals that rely on Honey Bees might disappear such as tomatoes, peeper, or cattle. Their disappearance can have a huge impact on our lives. In fact Albert Einstein said, “If the bees had suddenly disappeared, then man would have nothing any more but four years in front of him. Without bees, no more pollination, no plants, no animals, no human.”

Bees pollinate crops we consume directly, such as vegetables and other foods. But they also pollinate crops that help us indirectly by providing food for the grain that animals consume, or by pollinating plants used in clothing industries and elsewhere. If we lose those pollinators, we face afood crisis like none we have ever seen. Therefore it is really important to do something to not let it happen.

Actually, the North American Pollinator Protection Campaign recommended to the public to avoid applying pesticides during mid-day hours, when Honey Bees are most likely to be out foraging for nectar and pollen on flowering plants. However, this is not enough, it is also recommended to reduce the use of genetic modified organism and pesticides on crops or flowers because they can have bad effect of bees; but scientists still trying to find a possible solution to save Honey Bees. 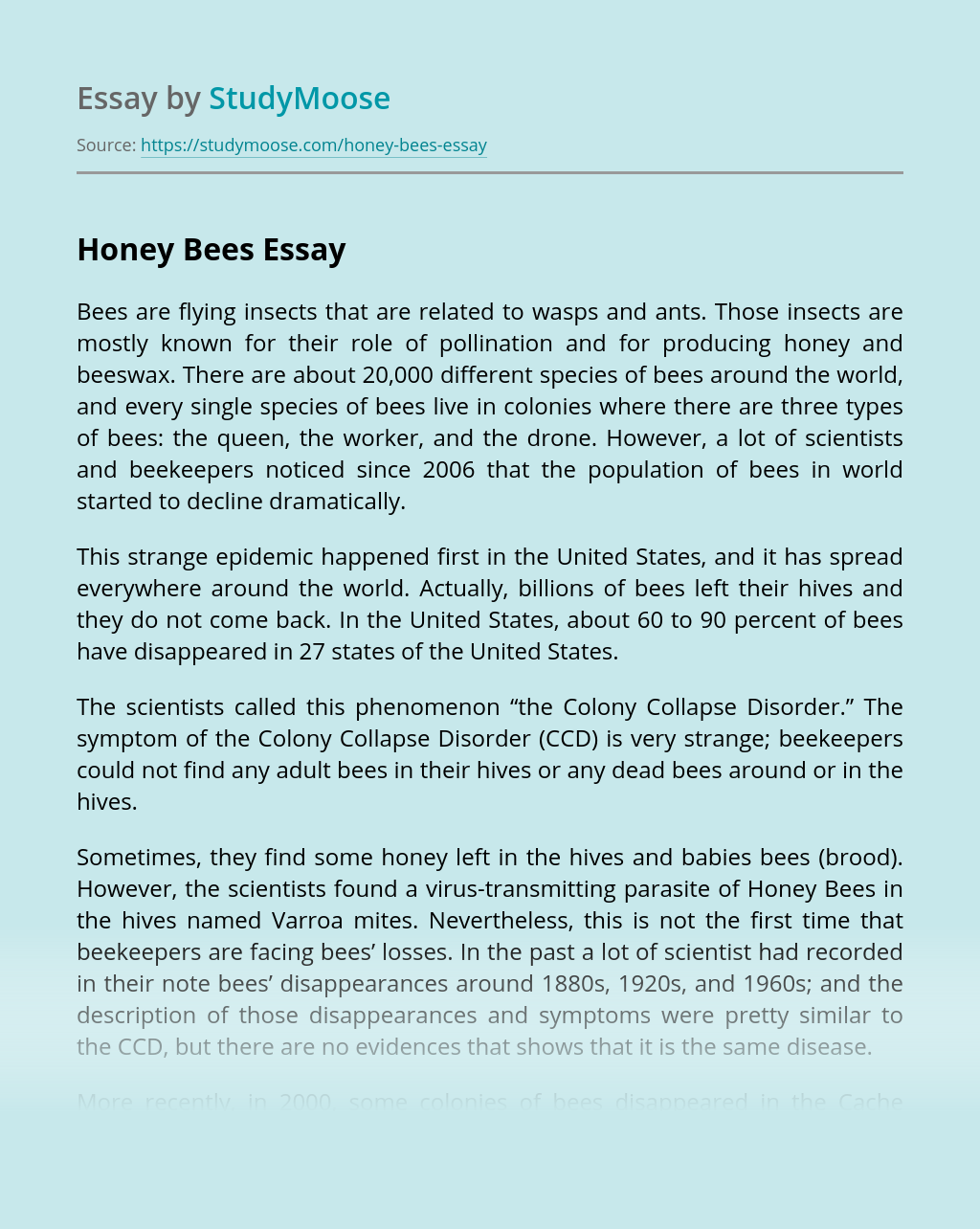