Honesty and Lies in "The Crucible"

Arthur Miller’s work “The Crucible” reproduces the strangest and most terrible chapter in human morality. The soul game between characters and characters deserves deep consideration. What will happen when you are asked to make a life-and-death choice between honesty and lying? In the book “The Crucible”, this is a problem. In an unusually closed and harsh social environment, people’s inherent weakness, selfishness, despicability, cruelty and desire will arise involuntarily. That kind of deformity or even abnormal desire and impulse will make you look different.

Don't use plagiarized sources. Get your custom essay on
“ Honesty and Lies in “The Crucible” ”
Get custom paper
NEW! smart matching with writer

For Abigail, as the next step in absolving herself of sin, she accuses others of being witches and a group of little girls were used by Abigail to avoid their mistakes, causing disasters beyond their control. Under torture by religious groups and the authorities, the girls were forced to lie and frame innocent people. But they are not so much the makers of the whole tragedy as the fuse. They have unlocked the shackles and shackles of human nature. Morality has lost its binding force and standards. In Salem, a closed town, it seems that you have to point out that some innocent people are witches to prove your innocence.

Individual revenge evolved into a carnival of violence as a whole.
Also, when Abigail had an affair with John Proctor and she also ironically calls Elizabeth a liar shows her morality; she says, ‘Goody Proctor is a gossiping liar!'(Miller 12). Abigail is the one that is actually a liar and she fuel everyone by blaming other people, everything she says is so moral but she does bad things at the back. It can be seen from this that the ascetic religious way of Salem suppresses human nature, and the hidden things in the town are far from as quiet and peaceful as the surface. Faith has become a dangerous thing in Salem. When such an environment is broken by the game of a group of ignorant girls, people are free to release their nature, revenge and accusation will come more unbridled, from Abigail’s dialogue, we can see that revenge has become a revenge of national revenge.
The characters also developed self human nature. In ‘The Crucible’ the whole process of the witch-hunting case is actually the process of the inner transformation of the owner John Proctor. He was calm, opinionated, upright, true to his heart, and even had a high reputation in Salem. The situation shows John Proctor really love his wife, “He reaches out his hand as though toward an embodiment not quite real, and as he touches her, a strange soft sound, half laughter, half amazement, comes from his throat. He pats her hand. She covers his hand with hers. And then, weak, he sits” (Miller 134). John Protok knows the truth about his wife, but all he cares about is he will buy cows as long as the harvest is good this year to please his wife Elizabeth. Instead, Elizabeth reminded him that he should go to court to make it clear that this was just a little girl’s joke, telling him that God would not allow him to hide the facts from the court, and John wanted to avoid it. When the situation spread to him, he just wanted to protect his family, but Elizabeth got caught. He began to realize that the game between heaven and hell is in front of them, and they can only look back. Eventually, in order to give the world the truth of his extramarital affair with Abigail, Proctor pushed him to the tragedy stage step by step. The harsh life situation squeezed out the potential noble qualities of his personality little by little. He began to think that he could not climb the gallows as calmly as a saint because he was not a saint and his integrity had already gone bankrupt.
Elizabeth says, ‘John, I counted myself so plain, so poorly made, no honest love could come to me! Suspicion kissed you when I did; I never knew how I should say my love. It were a cold house I kept!’ (Miller 137). Elizabeth did not attribute John’s derailment to his unrestrained desire or the seduction of Abigail, but to his own cold. Elizabeth awakened the nobility of John’s heart, so he wanted to live, but at this time there was a big difference from the previous self-depraved life. But at the same time, he also faces a bigger problem: whether he wants his own survival or honest dignity. John Proctor is faced with a deep self-game in his heart. He makes a cruel choice between honesty and lies, between conscience and betrayal, and even between life and death. When he finally snatch back his signature on the confession at the last moment, he stepped onto the gallows without hesitation. John completed the self-game of human nature step by step and gained the real freedom of the soul. The witch of Salem is like a sharp dissecting knife to show the dark and evil side of human nature vividly to the world. The seemingly benevolent townspeople framed each other under the drive of desire. The noble priest lost his self-belief. The ruler of the regime lost his direction between logic and ethics. Finally, Salem became a hell on earth.

Honesty and Lies in "The Crucible". (2020, May 15). Retrieved from http://studymoose.com/honesty-and-lies-in-the-crucible-essay 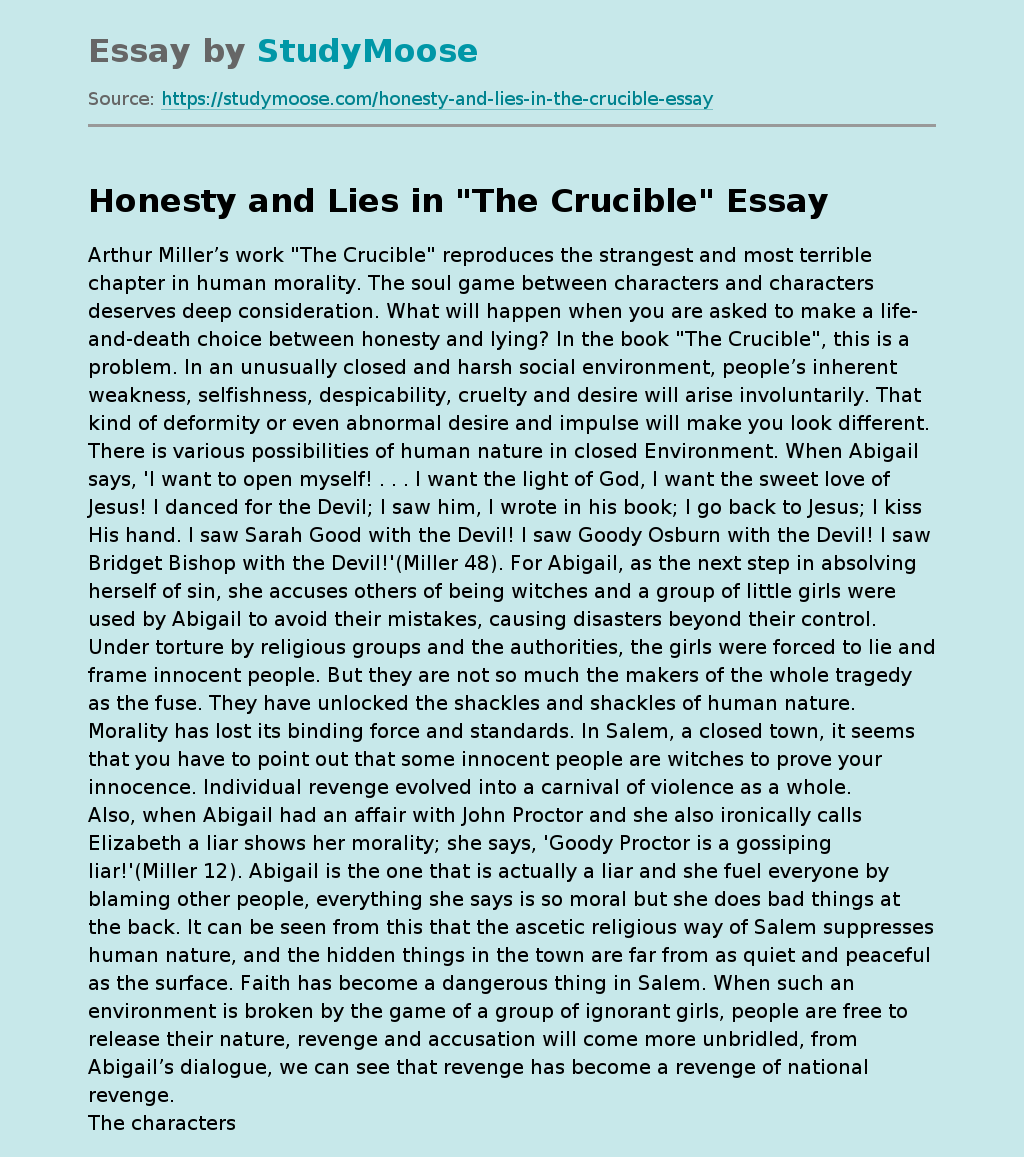