Modernity in the late 1960’s to the contemporary period explores the fundamentals and the notion and ideologies of heterosexuality which extends to thematic concepts in literature. The tenets of gender is questioned and hereto put forth as social equity, an underlying idea of democratization, contests the precepts of gender and sexuality. What is biologically ‘straight’ is devolved with identity reconstruction and partiality towards sexual orientation.

Don't use plagiarized sources. Get your custom essay on
“ Homoeroticism in Bram Stoker’s Dracula ”
Get custom paper
NEW! smart matching with writer

Homosexuals, in its simplest sense, are the non-heterosexuals. They have distinct preference for the same biological sexual orientation. They are the basket term for gays, lesbians, bisexuals, and closets. Faculties of psychosocial behavior explore the deviance and the non-normative sexual practice of homosexuals.

It is acknowledged that gays are ‘psychosocial’ deviance, not a sickness but a social reality. The queer society, bearing some forms of behavior and principles, and language materializes in several literatures as some queer theorist claim.

Thus there is manifestation and imposition of ‘third gender’ structures and labels from an external mainstream culture of the ‘homosexual’ minors into literature. Here we explore the unconscious inclusion of pronounced homosexuality of the author Bram Stoker through the vampire Dracula.

Bram Stoker’s vampiric Dracula is thus scrutinized using queer theory—process of discovering and exposing underlying meanings, distinctions, and relations of power in larger culture that others oversimplify. The capitalization of overt heterosexuality of the vampiric Dracula is examined overlaying the bounds of the character as simply being a ‘blood-sucking’ un-dead organism.

A major proponent of the queer theorist Eve Kosofsky Sedgwick and the Psychosocial Principle of Sigmund Freud will be utilized as a tool for understanding [the literature and] Dracula and explicate the vampire’s [methods] of homoeroticism. 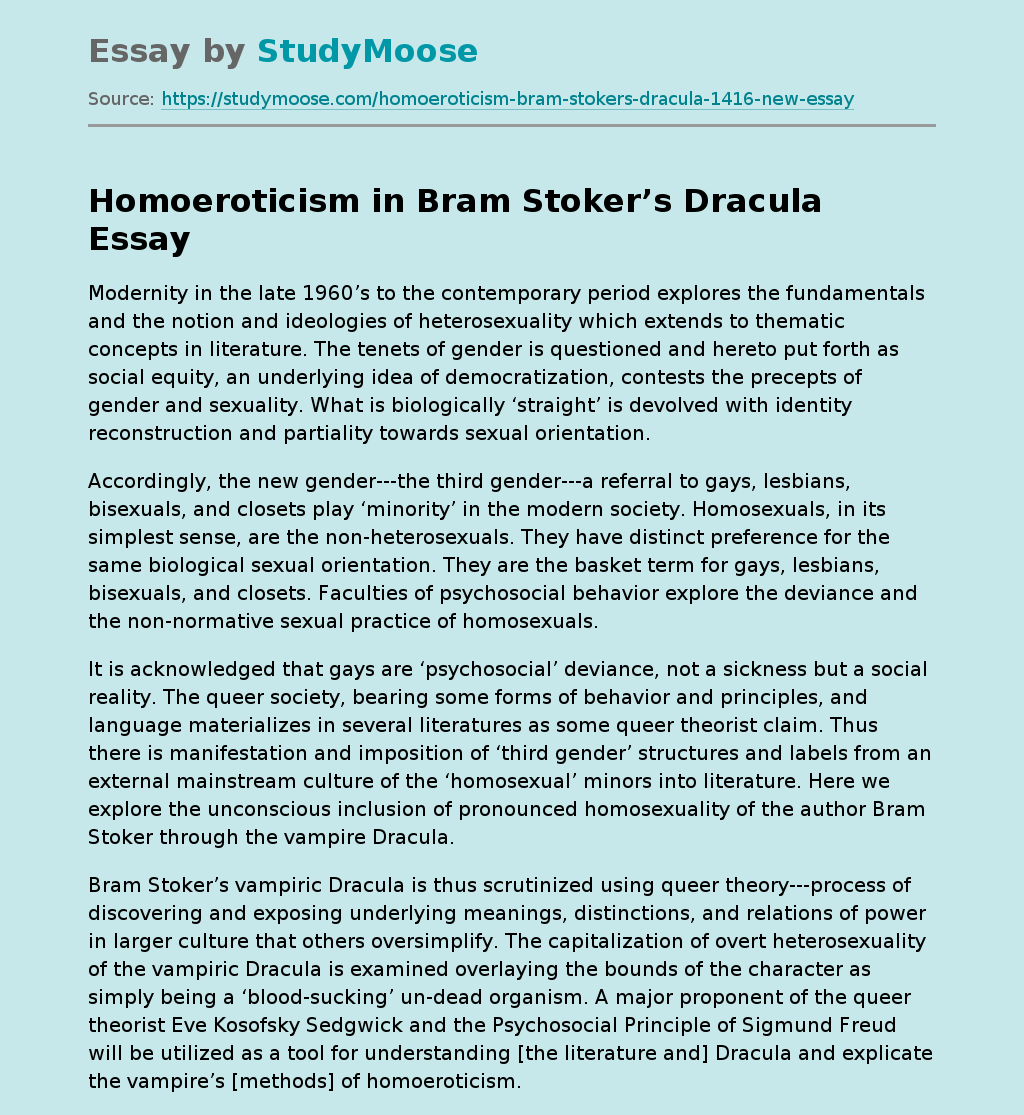