What if someone in this room was suddenly living on the streets? Should I change my views and opinions on them and what if I did? How do you think they would feel? And how would you feel in their position? Today I will be talking about the stereotypes that are put on the homeless and how wrong those stereotypes actually are. My argument will include the average age and gender of the homeless in Australia, the countless causes of homelessness, and the responsibility we have as a community and a country to ensure that in our future anyone who is hit with bad times isn’t cast straight onto the streets.

Don't use plagiarized sources. Get your custom essay on
“ Homelessness oral presentation ”
Get custom paper
NEW! smart matching with writer

I’m sure that if asked to describe the average homeless person you would all agree on the same thing, the classic middle aged man, dressed in dirty old clothes who is probably a drunk. Although these people may exist they do not make up for the entire homeless community.

But I’m sure that if all of Australia knew that 27% of the homeless were children and teens, and that 14% were respectable elders. More aid would be given to those in need Continuing with the stereotypes a lot of people are positive that the majority of the homeless are indeed homeless because they brought it upon themselves probably due to drug and alcohol abuse, yet they wouldn’t know it was found that the single largest cause of homelessness in Australia is domestic and family violence, which largely affects children and teens.

They also probably wouldn’t care about the other things that could lead to being homeless, like poverty, lack of affordable housing and poor physical or mental health because they might know someone in the same situation, but that does not mean anyone can simply be fine. A few Months ago my boss Wayne and his wife divorced, The wife kept the house with the kids and Wayne was kicked out, till this day Wayne has been in between sleeping in his car parked behind his business and sleeping at mates houses. Luckily for Wayne he had the business to support him as well as his friends unfortunately there are a lot of people out there without both.

Once again maybe if people were shown the facts and maybe shown stories from the homeless who do not drink or do drugs, people would be more open minded and willing to help. There are many people that would argue that they shouldn’t spend their hard earned money on someone who will probably spend it on drugs or alcohol which is fair no one knows what they would do with your money but you can always just donate it to the charities dedicated to getting these people off the streets in turn solving your problem of whining about them. Others also stress they cannot afford to give out money which is also fair no one wants to put you in the same position as them, though if you really do care you don’t even have to donate money, only your time, helping out in shelters for example with cooking or distributing the food, teaching and helping fill out resume’s as the homeless often undermine themselves can have just as much of an impact.

Lastly if homelessness isn’t fixed up you could be caught up in it to. In history many people have thought they were safe and have had good reason to think so but we never know what the future will bring and events such as the great depression, natural disasters or post-world-war eras have all hit civilians hard before, anything can happen and you could be hit next. In conclusion if the public were more aware of the reality of what is really happening there would hopefully be more of a push to solve this problem, also if you cannot just give away your money there are still more impactful things you can do. Solving homelessness will stabilise our community and I’m sure nobody would be against a future where everyone has a job, a home and stable and secure lives. 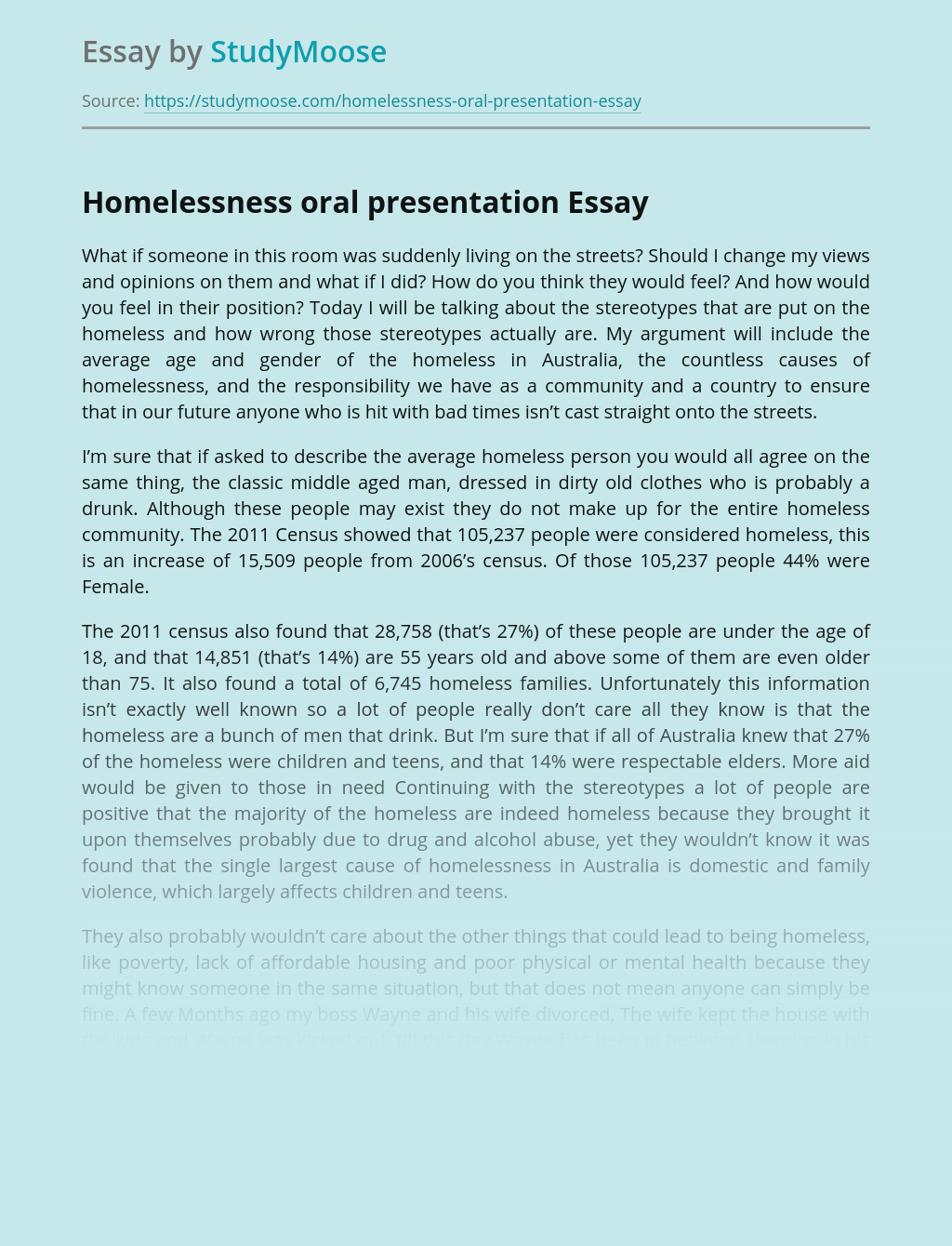