Augiéras Francis is the son of Peter Augiéras, a renowned French pianist, and a mother porcelain painter original Polish .Augiéras stone, installed in the U.S. for professional reasons, died of appendicitis two months before the birth of his son.Returned to France a few months after birth, Francois Augiéras spent his childhood with his mother. In Paris , he finds a disaster, he studied at the College Stanislas .

Turn in your highest-quality paper
Get a qualified writer to help you with
“ Home Reading Report ”
Get high-quality paper
NEW! AI matching with writers

He then lived in Perigueux , where he moved at the age of eight years. At the age of thirteen, at the public library, he discovered André Gide, Nietzsche and Arthur Rimbaud. Attracted to art, he left school at the age of thirteen years to take courses in drawing. In 1941, he enrolled in a youth movement that proliferate under the Vichy regime , but in 1942 he breaks away to become an actor in a traveling theater.

Engaging, in 1944, the filing of the fleet at Toulon , then switches to French Algeria , where he finds himself in Algiers. It hardly some attention, eager to go to the South he senses to be his real country, where he joined his uncle Marcel Augiéras, colonial military retired, who lives in El Golea , in the Sahara. During his stay in the Sahara, Francois Augiéras is sexually abused by his uncle , discovering this occasion his own inclinations homosexual.

Augiéras is inspired to write this episode in 1949 , The Old Man and the Child, which he published at the author under the pseudonym Abdullah Chaamba.

The book holds the attention of André Gide , who a few months before his death, meets the young writer after he sent her two letters. Augiéras Gide later described a clearly moved by his meeting with him, and imagines himself as the “last love” the great writer. The Old Man and the Child was published in 1954 by Editions de Minuit and then a rumor that “Abdallah Chaamba” is a pseudonym Gide’s posthumous. Lonely and rebellious, multiply Augiéras travel, including browsing the Algeria and Greece , and making pension Mount Athos . In 1957-1958, he participated in the journal Structure, headed by Pierre Renaud in Paris, and then engages in a company of Camel Corps in southern Algeria. His books are inspired by his eventful life: himself wrote “I have accepted – or called – of dangerous adventures, always with the ulterior motive: it will become books! “.

Your temperament is pantheistic, Augiéras mentions in his writings openly sexual attraction for both boys and girls, but also for animals. In The Sorcerer’s Apprentice, the first of his books that is not directly autobiographical, he addresses the topic of pedophilia . In 1960, he married his cousin Viviane of The City, but their relationship did not last and was officially disbanded nine years later. In 1967, he completed the first book he signed his real name, a teenager at the time of the Marshal and many adventures. The wanderings, insecurity, extreme loneliness aggravate his condition. The hospital stays of Périgueux succeed. In the late 1960s , a time he lived in the caves at Domme to escape living in hospices, and writes on school notebooks.

His book Domme or occupancy test, he fails to get published in his lifetime, was inspired by his life in caves. Undermined by poverty and malnutrition, prematurely aged by his living conditions, he moved into a nursing home in Ferns , and in a hospital for indigents in Montignac . A trip to Mount Athos was published in 1970. Worn heart, François Augiéras died December 13, 1971 at the hospital in Perigueux. He was buried in Domme on 18. One of his few friends, the teacher Paul Placet, then works to publicize the work of Augiéras by organizing exhibitions of his paintings and to disseminate the manuscripts. Several works of François Augiéras, including collections of correspondence, were published posthumously. In addition to a literary work, it leaves a set of paintings and drawings, still poorly understood. One of his biographers, Serge Sanchez, described the literary work of Augiéras as “a fresco spiritual rooted in his own life”.

In AD 740, one of the three apprentices of Merlin named Maxim Horvath , betrayed him by joining forces with the evil sorceress Morgana le Fay. Morgana mortally wounds Merlin before another apprentice, Veronica Gorloisen, absorbs Morgana’s soul into her own body. As Morgana tries to kill Veronica from within, the final apprentice, Balthazar Blake stops her by imprisoning Morgana and Veronica in the Grimhold, a magic prison in the shape of a nesting doll. Before dying, Merlin gives Balthazar a dragon ring that will identify the Prime Merlinean, Merlin’s successor who will be the only one able to defeat Morgana. Throughout history Balthazar imprisons Morganians, sorcerers who try to release Morgana, including Horvath, into successive layers on the Grimhold while he searches for the successor. In 2000, 10-year-old Dave Stutler, encounters Balthazar in a Manhattan antique store.

Hoping he is the successor, Balthazar gives him the dragon ring, which comes alive and wraps itself around Dave’s finger. Dave accidentally opens the Grimhold, releasing Horvath. While battling for possession of the Grimhold, Balthazar and Horvath are imprisoned in an ancient Chinese urn with a ten-year lock. Dave is humiliated as he is discovered by his teacher and classmates with his pants wet due to a vase that broke in his lap, and as everyone enters the store, there is no trace of the battle, so it is believed Dave made it up. Ten years later, Dave is a physics student at New York University and has made the reacquaintance of a childhood crush, Becky. The mystical urn opens, releasing Horvath and Balthazar. Horvath goes after Dave in search of the Grimhold, and Dave is eventually rescued by Balthazar, riding an animated steel eagle created out of a Chrysler Building gargoyle.

Dave initially refuses to help Balthazar, but agrees to help as long as he is left alone once the Grimhold is found. They track the Grimhold to Chinatown, where Horvath has released the next Morganian, Sun Lok. Dave defeats Sun Lok, and Balthazar retrieves the Grimhold. Dave finds that he wants to learn to use magic after all, and agrees to become Balthazar’s apprentice. He also becomes romantically involved with Becky against Balthazar’s wishes. Horvath enlists celebrity magician Drake Stone to help him retrieve the Grimhold. They attempt to kill Dave, but Balthazar saves him. Cued by Horvath, Dave demands to know the truth about Balthazar’s quest. Balthazar reveals that Morgana is trapped in the Grimhold, as well as Veronica; if Morgana escapes she will attempt “The Rising”, a spell that will raise sorcerers from the dead and use them to enslave mankind. Dave, as the Prime Merlinian, is the only one who can stop her.

After an incident involving out of control animated mops, Dave decides to give up on magic, but changes his mind when he meets Becky again. He returns to his laboratory just as Drake and Horvath try to kill Balthazar after stealing the Grimhold. Once that is done, Horvath uses the “parasite spell” to steal Drake’s energy, and takes his magic ring. He releases the witch Abigail Williams and uses her to kidnap Becky. Once Abigail completes that, Horvath steals her energy and pendant as well. Horvath threatens to kill Becky, forcing Dave to surrender the Grimhold and his ring. Balthazar then goes after Horvath in Battery Park, knowing that without the ring Dave will be killed. Horvath releases Morgana, who still possesses Veronica’s body, and she begins the spell as Horvath animates the Charging Bull sculpture to attack Balthazar.

With Becky’s help, Dave reaches them in time to try to defeat Horvath and stop Morgana from completing the Rising, and Balthazar’s eagle flies away with the bull. Balthazar takes Morgana’s soul from Veronica’s body into his own, and then Morgana’s spirit escapes his body. Morgana tries to incinerate them, but Dave stops her – proving he is the Prime Merlinian by using magic without the ring. The ethereal projection then shoots energy bolts that kill Balthazar before battling Dave, who destroys her after creating a Tesla coil with the square’s lamp posts. Balthazar is then revived after Dave jump-starts his heart, and reunites with Veronica. Dave and Becky kiss, and fly to France on Balthazar’s eagle.

The novel The Sorcerer’s Apprentice is a good novel. It shows how good should be prevail than bad. It also show the right ways of using supernatural powers like magic. I like also the plot of this novel. It clearly and understandingly shows the relationship of what had happened from the past to the future. The story can be related to our life especially to the word responsibility. In the story, the good ones defend the good and we should also do the same. We should take the responsibility we have. 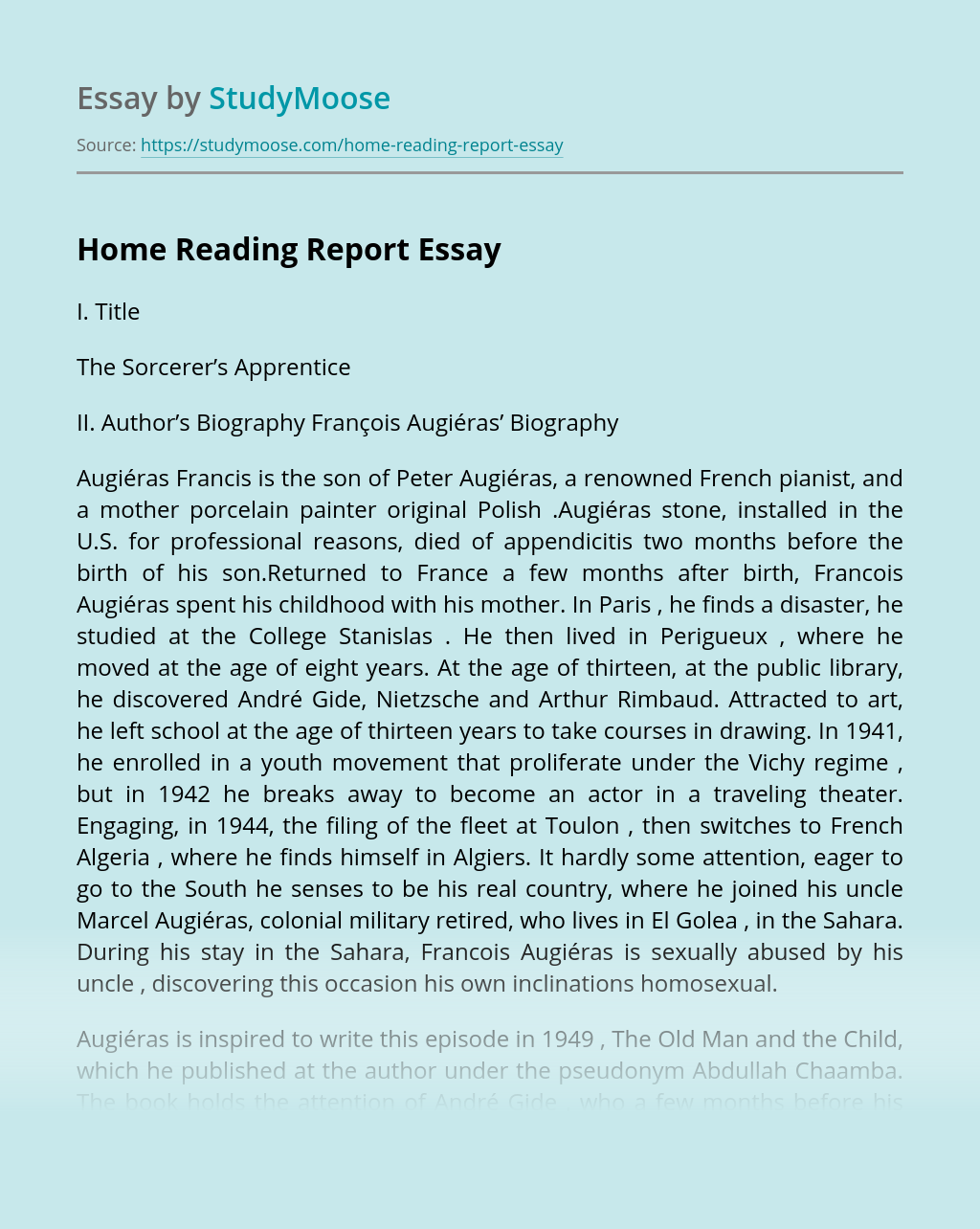 Turn in your highest-quality paper
Get a qualified writer to help you with
“ Home Reading Report ”
Get high-quality paper
Helping students since 2015
Stay Safe, Stay Original