Over time, Frank’s journey to rescue his debilitated sister, the siblings’ dependence on each other becomes more evident. Frank and Cee Money, the protagonists of Toni Morrison’s Home, exemplify this powerful need, a need that at times flirts with greed. The reason Frank feels so responsible for Cee is due to the fact while growing up they had neglectful parents as well as an abusive grandmother, his failed relationship with Lily, and lastly him facing his inner turmoil due to his actions in Korea.

Don't use plagiarized sources.
Get Your Custom Essay on Home by Toni Morrison Just from $13,9/Page

Toni Morrison states numerous times in the text, how Frank would do anything for Cee. Frank recalls, “Only my sister in trouble could force me to even think about going in that direction” (Morrison, 84). His parents certainly did not inculcate this instinct into Frank, for they have neglected their two children, leaving them with the witch of a Grandmother, Lenore. The relationship between Frank and Cee, which exceeds romance, sanctions Frank while handicapping Cee.

Due to the unfortunate circumstance of having careless parents and cruel grandparents, at a young age Frank is occupied with the unspoken role of Cee’s Guardian.

“Their parents were so beat by the time they came home from work, any affection they showed was like a razor—sharp, short, and thin” (53). To grab hold of the relationship, Morrison, uses the first person point of view with Frank Money, and the third person perspective from Cee, along with other characters. Frank, as the acting guardian of Cee, the responsibility he has taken on is a significant and perhaps be one of the more important and well-developed themes of the novel. Frank, through the first person point of view describes how he was “guarding her, finding a way through tall grass and out of that place, not being afraid of anything” (104). Frank gladly took ownership for Cee, and was heroic in the process which he loathed about in his own mind. Frank needs to take possession of his sister for his own wishes. He experienced rough times in Korea and it was his way of burying the past and paving a new road for his future.

This is the sole reason for Frank’s journey south back to Lotus, Georgia; he is frantic to rescue Cee after she was in dreadful hands. Cee went through much more hardship while Frank was away due to the lack of experience she was accustomed to. Once more, Frank wanted to be the defender he had been as a child; to revivify the feeling in his heart of fearlessness. Frank needs something to protect. Cee, his dearly loved sister, take up this role for most of the novel. Concurrently, Frank satisfies his troubled need to care for someone and loves his sister. Willingly, Frank admits, “I’ve had only two regular women. I liked the small breakable thing inside each one. Wherever their personality, smarts, or looks, something soft lay in each…A little V…that I could break with a forefinger if I wanted to. But never did” (67-68), Frank expresses his obsession with weakness. Frank denotes this weakness as a small child to whom he is the parent.

He handles it cautiously, cares for it, and provides a home for it. He needs it to feel needed, which happens to be a reoccurring theme throughout the novel. “When…I caught my reflection in a store window, I thought it was somebody else. Some dirty pitiful-looking guy…Right then, I decided to clean up” (69). In this moment, Frank’s search of his relationship with Lily begins from a forceful self-hatred that has presented itself since his deployment to Korea. After his relationship with Lily fades and crumbles, Frank returns to the seed that from the beginning he was in need of, his sister. After all, his journey was certainly always, to his sister, who needs him far more than Lily ever did. “She was the first person I ever took responsibility for. Down deep inside her lived my secret picture of myself—a strong good me…In my little boy heart, I felt heroic…” (104). Without Cee, Frank is nobody.

Without Cee, Frank has no purpose. As Frank and Cee rummaged through their uneasy childhood, they consistently found each other as a safe, comfort zone. The burial that occurs in his first memory of the novel, Frank recalls, “I hugged her shoulders tight and tried to pull her trembling into my own bones because, as a brother four years older, I thought I could handle it” (4). Immediately, as readers, we are aware of Frank’s self-imposed responsibility for Cee. The instinct was natural. Nature tends to prevail over nurture, as is certainly the case with Frank Money. Persistently his sister’s shield, to put it in a nutshell, for example, by his actions against the man who flashed her, Frank exaggerates Cee’s dependence on him. “… [Cee] was prevented from any real flirtation because of her big brother, Frank. The boys around knew she was off limits because of her overbearing, over protective brother.

That’s why when Frank…enlisted and left town, she fell for…the first thing she saw wearing belted trousers instead of overalls” (47). Regardless of Frank’s good intentions, he really put Cee at a disadvantage and at risk. Their childhood was a clear indicator that Cee’s role as the helpless damsel in distress and in need of protection, and Frank’s role as her dedicated protector. Frank and Cee, over the course of the novel, show many unclear indicators about the relationship between the siblings. Toni Morrison has a job well done with portraying the characters as more reliant on each other than lovers, but one could simply mistake the relationship between them. Frank, shaped by his inclination to protect, seeks to redeem himself for his unspeakable actions in Korea; he “[decides] to clean up” (69). Cee cleanses him. She grounds him, without even knowing it. He shuns away from his violent tendencies, he came across during his war experience in Korea.

At the start, he believes he needs “the rage that had accompanied killing Korea…to claim his sister” (102). Before retrieving Cee, however, his mindset evolves. “He couldn’t let things get so out of control that it would endanger Cee” (110). Given his failure to show Cee the evils of the world, Frank’s attempt to protect her as an adult is a difficult assignment. He could not save her from everything. He was late upon re-entering her life and missed her greedy husband, not the twisted doctor. Cee’s infertility symbolizes her permanent scarring, credited, in part, to her own brother. Frank, although a loving, kind brother, failed to teach Cee to be a woman. Now, she will never be. It is inevitable that no person can go through life without hardship. 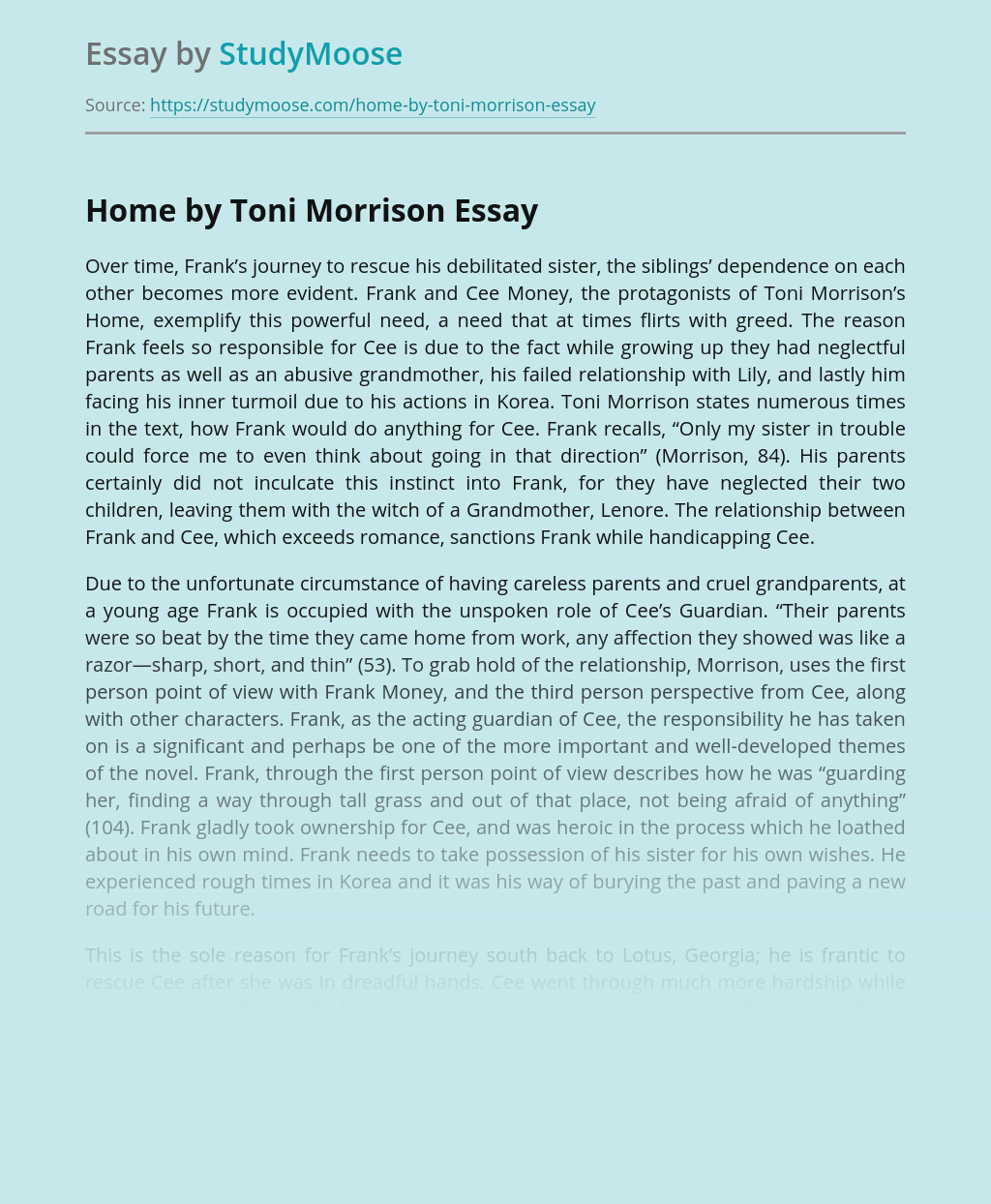 Paper on Light vs Darkness In A Tale of Two Cities

Often times in literature the comparison between light and darkness is made. In Charles Dickens, A Tale of Two Cities, the author contrasts the two elements throughout the novel. Light and darkness are in constant battle with each other, they also dominate the setting and tone of the story. From the opening lines the reader...

How does the Rachel Carson use language to convey changes and contrasts in mood and meaning in Silent Spring? The mood in the extracts from Rachel Carson’s Silent Spring changes continually from beginning to end. The first paragraph has an almost fairy-tale feeling to it – the tone is pleasant and calm and the opening,...

Get Essay
Essay about Reading

Ever since I started learning to read, it has been one of my favorite hobbies. I love to submerge myself into a book and get the chance to go on adventures I never can in the real world. Usually, when I get hooked on a good book, I can’t put it down. I’m not myself...

In William Shakespeare’s story Macbeth, the hero, faces a conflict that impacts how the play will go and delivers a message within the story. The conflict starts with the prophecies of the Weird Sisters and later on gets worse from the trickery of Lady Macbeth. The result concludes a series of repeating thoughts running through...

“Jail Bate” George discriminates her beauty and gender because of the way she acts. “She screamed” Steinbeck portrays Curley’s wife to have been through some drama and terror which could suggest her reaction from discrimination. As Steinbeck does not name Curley’s wife this is Steinbeck’s opinion that she is irrelevant, this is yet another example...