During my holiday season last year, I had an unforgettable experience that still remains fresh in my memory. I remember going to the shopping mall with my aunty in the early hours on a Saturday to do some shopping. Fortunately for us, we were able to secure a parking space on that busy Saturday morning because we left the house early. The shopping mall was so busy that people were engrossed with their shopping that they could not take note of anything unusual in and around the vicinity.

Turn in your highest-quality paper
Get a qualified writer to help you with
“ Holiday: Parking Lot and Busy Saturday Morning ”
Get high-quality paper
NEW! AI matching with writer

Shortly before mid-day, we had just finished shopping and about to head to the car park when we heard a large explosion. At first, it sounded like fireworks but because it wasn’t Christmas yet, I became so scared. Before I knew what was happening, I saw people rushing towards the exit of the shopping mall.

Everyone wanted to come out as the gun shot became louder. I could see people falling down and gasping for air, with slides of glasses everywhere.

The place was a complete disaster! The police and the paramedics arrived at the scene and within minutes they were able to secure the area, help the helpless and transport the injured. It was later understood that some thieves tried buggling a jewel shop in the broad day light but was unlucky as the alarm went off. Releasing it would an end for them; they pulled out their guns and started to shoot into the air in order to cause commotion so that they could escape.

However, some store owners were brave enough to pin down the thieves before they could escape. At the end of the day, the police questioned some of us including my aunty who was terrified about what had just happened and from then we were allowed to go home. 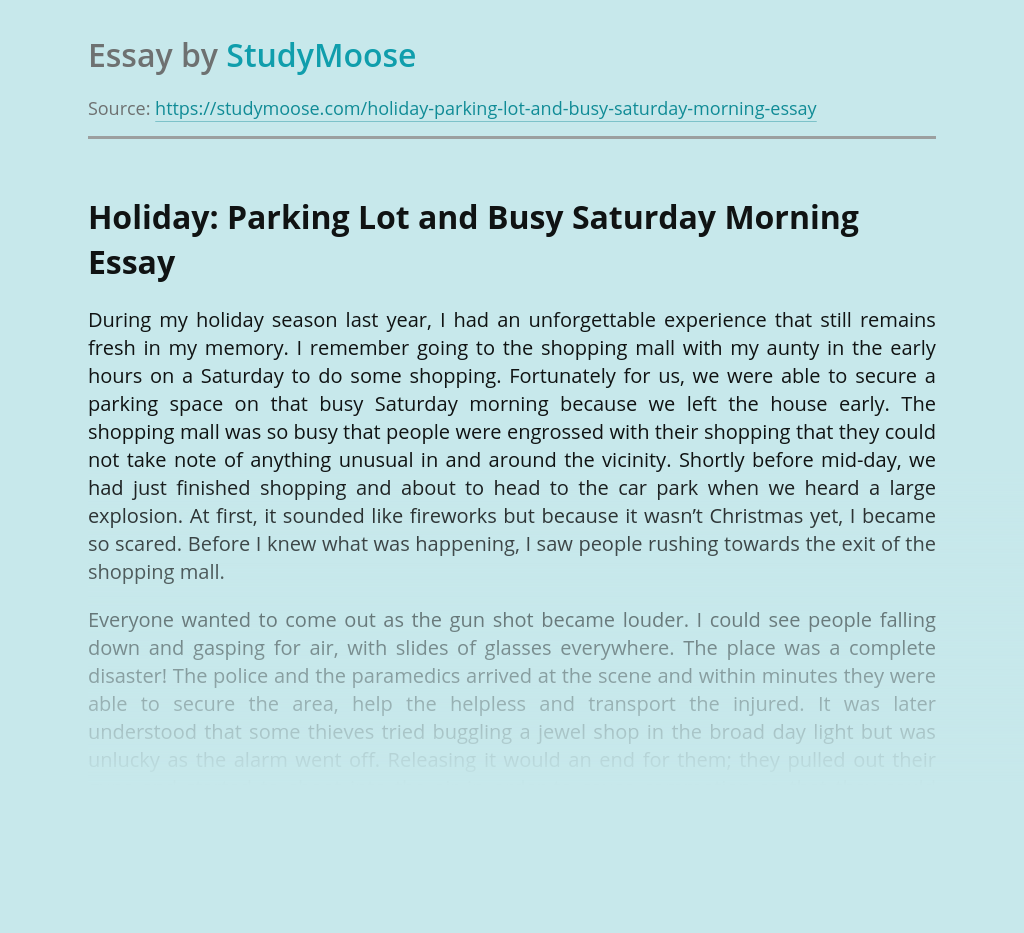 Turn in your highest-quality paper
Get a qualified writer to help you with
“ Holiday: Parking Lot and Busy Saturday Morning ”
Get high-quality paper
Helping students since 2015
Stay Safe, Stay Original