Hip-hop is a cultural movement that centered on music. It was born during the 1970s, in the Bronx, a poverty stricken section of New York City. DJs pioneered the movement, experimenting with new sounds and other forms of artistic expression. The most famous of these DJs are often referred to as the fathers of hip-hop: DJ Kool Herc, Afrika Bambaataa, and the Grandmaster Flash. Under their influence hip-hop became an innovative art form, creating stylistic sounds such as the beat break and rap.

Don't use plagiarized sources. Get your custom essay on
“ HipHop History ”
Get custom paper
NEW! smart matching with writer

It also became a forefather to modern-day electronic music, recreated the turntable and became a voice for social activism and inspired people of all kinds.

The birth of hip-hop began with Clive Campbell or DJ Kool Herc, a Jamaican immigrant who moved to New York at the age of ten. As a teenager, Campbell found an interest in spinning records. When he played he noticed that partygoers preferred dancing during heavy percussion instrumentals. This gave Campbell the idea to create a technique known as the beat break, where he “switch[ed] back and forth repeatedly between two copies of the same record, extending the drum break (History)”.

Campbell is also noted for being a father of rap, due to his longstanding tradition of toasting, a custom he brought from Jamacia, where one recites a speech or poem to the rhythm of a record (Goldman). Bringing these techniques together, Campbell was ushered into fame and quickly began performing all over New York City (Goldman). Campbell experienced much popularity and success until 1977 (Adaso) when he was attacked and stabbed by a partygoer while trying to end stop a fight (Munday).

Although Campbell had received relative fame, “he [was] never commercially successful (Munday),” however his innovate style inspired many contemporary DJs including, Grandmaster Flash and Afrika Bambaataa, who each made their own startling contributions to the fledgling music style.

By 1974, hip-hop, a term coined by DJ Starski, had quickly become a widespread cultural phenomenon (Adaso). Joseph Robert Saddler, born in 1958 and later known as The Grandmaster Flash, also started his DJ career as a teenager, first playing in abandoned buildings in his neighborhood and later moving his parties directly into schoolyards (Naison). Saddler is famed for recreating the turntable, turning it into part of the music ensemble instead just a record spinner. Saddler made a crossfader and two plates, to release the drag on the turntable allowing DJs to play records counterclockwise and extend the percussion pieces in a song (Light), a technique he calls needle dropping (Light et. al). He also created a technique known as scratching, where “sliding the record back and forth underneath the needle created the rhythmic effect (Light et. al)”. In 1981, he released the song “The Adventures of Grandmaster Flash on Wheels of Steel”, which showcased the newly invented scratching and needle dropping (Adaso). By 1982, Grandmaster Flash and his band the Furious Five painted a stark picture of the reality of life in the Bronx through “The Message” which gained international fame (Rap of Ages). However, Joseph Saddler was not the hip-hop artist who used the genre to bring attention to inner-city life.

Afrika Bambaataa, born Kevin Donovan in New York City’s the Bronx, became an integral part of hip-hop culture, as an artist, as well as a leader in social activism. Donovan was formerly the leader of the gang known as the Black Spades. But he eventually turned to music to express dissatisfaction at and expand the social awareness of social injustice and life in poverty (Waters). This ideal turned into the organization the Zulu Nation, which stated its mission as “improving and uplifting ourselves and our communities (Waters)”. Hip-hop, in turn, became a vehicle for expressing the harsh realities of life for African Americans and many other marginalized people, a legacy that is still true today. Donovan’s DJ persona is based loosely upon Shaka Zulu (Waters). a chief from an African tribe of the same name, who lived in the 1800s (Mitchell et al.) and formed a band called Soul Sonic Force.

During his early career, Donovan spent much of his time spinning records for block parties and other events. Donovan improved upon Dj Kool Herc’s breakbeat by adding “sounds from rock music recordings and even television shows (Waters)”. He released his first hip-hop record in 1980, called ” Zulu Nation Throwdown (Mitchell)”. In 1982, Donovan released “Planet Rock” under Tommy Boy Records(Mitchell) which soon became widely popular and is even noted for inspiring later electronic music, through its use of synthesizers and electric drum machines(Waters). He is also noted for giving hip-hop its four, sometimes five, pillars: rap, graffiti, Djing, and breakdancing. These pillars brought validity to these forms of expression and united them as a permanent part of the hip-hop movement.

DJ Kool Herc, Grandmaster Flash, and Afrika Bambaataa are known as “fathers of hip-hop” for good reason. They invented a new sound by manipulating their music, through breakbeats, needle dropping, scratching, and the use of electronic instruments, to put more emphasis on dance. Hip-hop parties began as a release from the harshness of life in the Bronx but through the work of DJs Kool Herc, Grandmaster Flash and Afrika Bambaataa quickly became a force for change and unity. 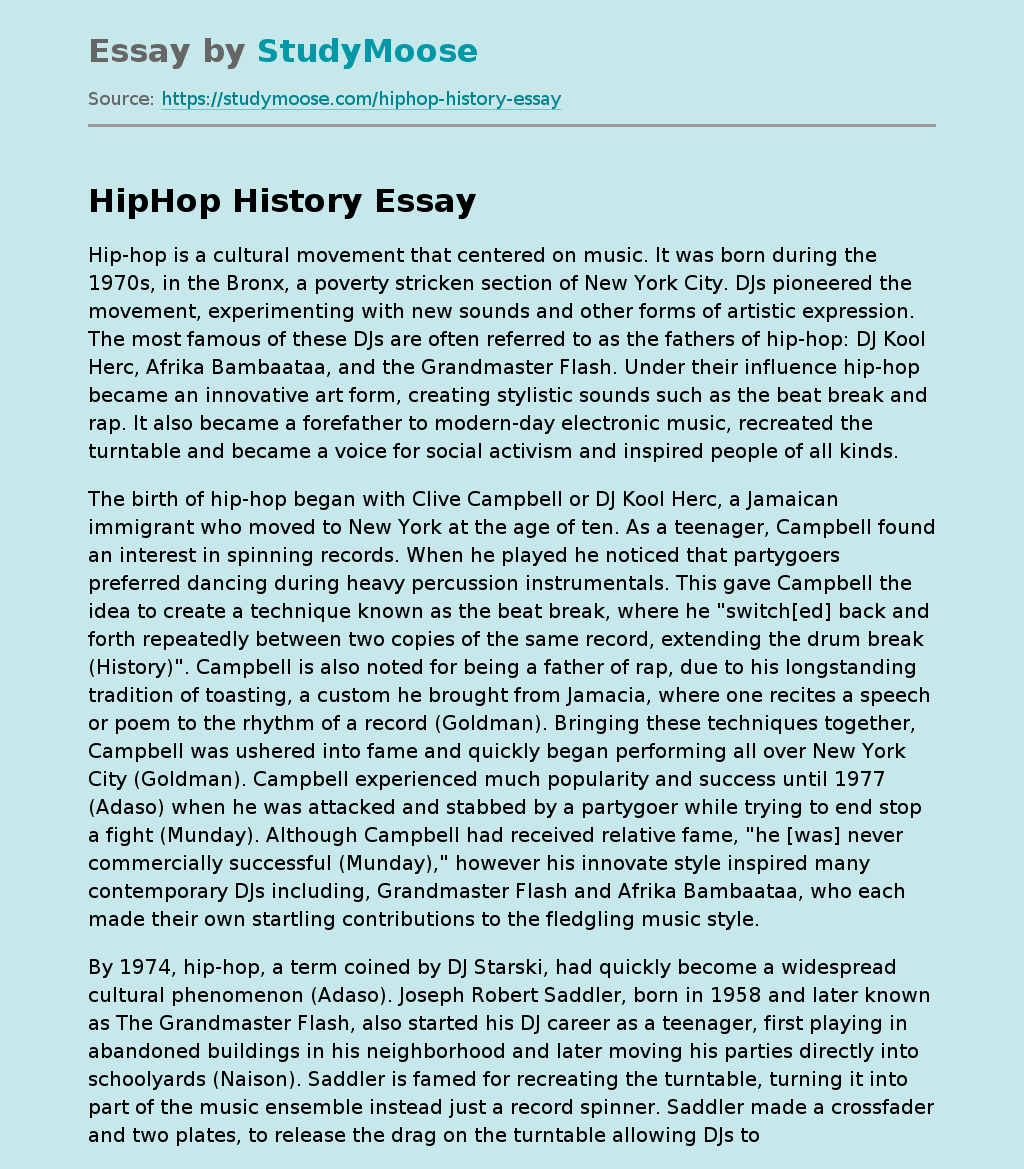