Hester, What a Change!

A review of Hawthorn’s “The Scarlet Letter”, discussing one of the central legacies of American Puritanism by using the plight of characters, Hester Prynne and Arthur Dimmesdale, to illustrate the conflict between the desire to confess and the necessity o

Hester, What a Change! The Puritans came from England in the sixteen hundreds to break free from the laws and regulations made by the king of England. In the new world, they were able to practice their own form of religion.

Don't use plagiarized sources. Get your custom essay on
“ Hester, What a Change! ”
Get custom paper
NEW! smart matching with writer

The Puritans believed in God and His laws. “A Young Puritan’s Code” was “Being sensible, that I am unable to do anything without God’s help, I do humbly entreat him by his grace to enable me to keep these resolutions so far as they are agreeable to his will, for Christ sake.” (Jonathan Edwards) And they had over fourteen resolutions to keep. Although this is Jonathan Edwards interpretation, it was most likely the way the Puritan lived.

And they probably obeyed it out of fear for their life. For sinners are in the hands of a angry God. Many years later Nathaniel Hawthorn was greatly interested by the Puritans. This 19th-century American novelist, was born on July 4, in Salem, Massachusetts, and died May 11, 1864. He was the first American writer to apply artistic judgment to Puritan society. He was intrigued by the psychological insight into the complexities of human motivations and actions. In The Scarlet Letter, he expressed one of the central legacies of American Puritanism, using the plight of Hester Prynne and Arthur Dimmesdale to illustrate the conflict between the desire to confess and the necessity of self-concealment.

Hawthorne grew up with his two sisters and their widowed mother, and an uncle saw to his education at Bowdoin College. In 1852, Hawthorne wrote the campaign biography of Franklin Pierce, an old college friend. The best of Hawthorn’s early fiction was gathered in Twice-Told Tales, Mosses from an Old Manse, and The Snow-Image. These capture the complexity’s of the New England Puritan heritage. Hawthorne’s writing had a wide range of influence upon people, such as Melville who dedicated the great classic Moby-Dick to him. One of Hawthorne’s most famous novels is The Scarlet Letter. One of his characters (Hester Prynne) is changed throughout the novel. Hester changes three different times, from being a shamed woman to a capable women and then to a healer. Hester Prynne emerges from the prison, proud and beautiful wearing an elaborately embroidered scarlet letter A on her chest and carrying a three month old baby. While she is standing on the scaffold she becomes aware of the stern faces looking up at her. Hester painfully realizes her present position of shame and punishment. Society will not forgive her for the adultery that she has committed because of the Puritan age in which they live. Most of the old women think she should have a worse punishment. One of them even says “At the very least, they should have put the brand of a hot iron on Hester Prynne’s forehead” (50). At this point in time, society will not forgive Hester and she will not forgive herself. Going through all this shame and embarrassment, the feelings of torment and ridicule begins to change Hester, although she does not notice it till later, she is becoming a better person from all that is happening to her. Not only does Hester change mentally, but she also changes physically. The warmth, charm and passion which she once possessed appears to have been replaced by coldness, severity, and drabness. She hides her beautiful hair under a cap and has no more enthusiasm. Hester only demonstrates warmth and charm around Pearl. Society also begins to view her differently. Some people even feel as though she can see “right through them” and know their sins. They do not look at her as badly as they did at first, because she is changing. “The letter was the symbol of her calling. Such helpfulness was found in her-so much power to do and power to sympathize-that many people refused to interpret the scarlet “A”; by its original signification. They said that it meant “Able”; so strong was Hester Prynne, with a woman’s strength.” (139). She is now beginning to go through some of the most extensive changes of her life. She is filled with many different feelings of torment and self worthiness, even at one point in time she considers suicide. But all these feelings are making her a stronger and more intelligent person. Hester learns from her sin, and she grows strong as a result of accepting her punishment. “The scarlet letter was her passport into regions where other women dared not tread. Shame, Despair, Solitude! These had been her teachers-stern and wild ones-and they had made her strong.” (170). A little more than half way through the novel, Hester has changed into a women capable to help others and being respected by them. Society has now forgiven her and some may even admire her. Although she wears the letter A long after she was able to take it off, she decides to take it to her grave. Hester might have worn that letter so long, to prove that she has nothing to hide. Hester has found the happiness that comes from being at peace with oneself, with society, and with God. Throughout this novel Hester Prynne changes from a shameful scared woman, to one that is able and not afraid of what the future has to hold. Hester gained a wisdom through her suffering. Now the village people come to her for guidance with their sorrows and problems, although Hester was never a true Puritan. But Hester always did try to live up to the Puritan code.

Hester, What a Change!. (2020, Jun 02). Retrieved from https://studymoose.com/hester-what-a-change-new-essay 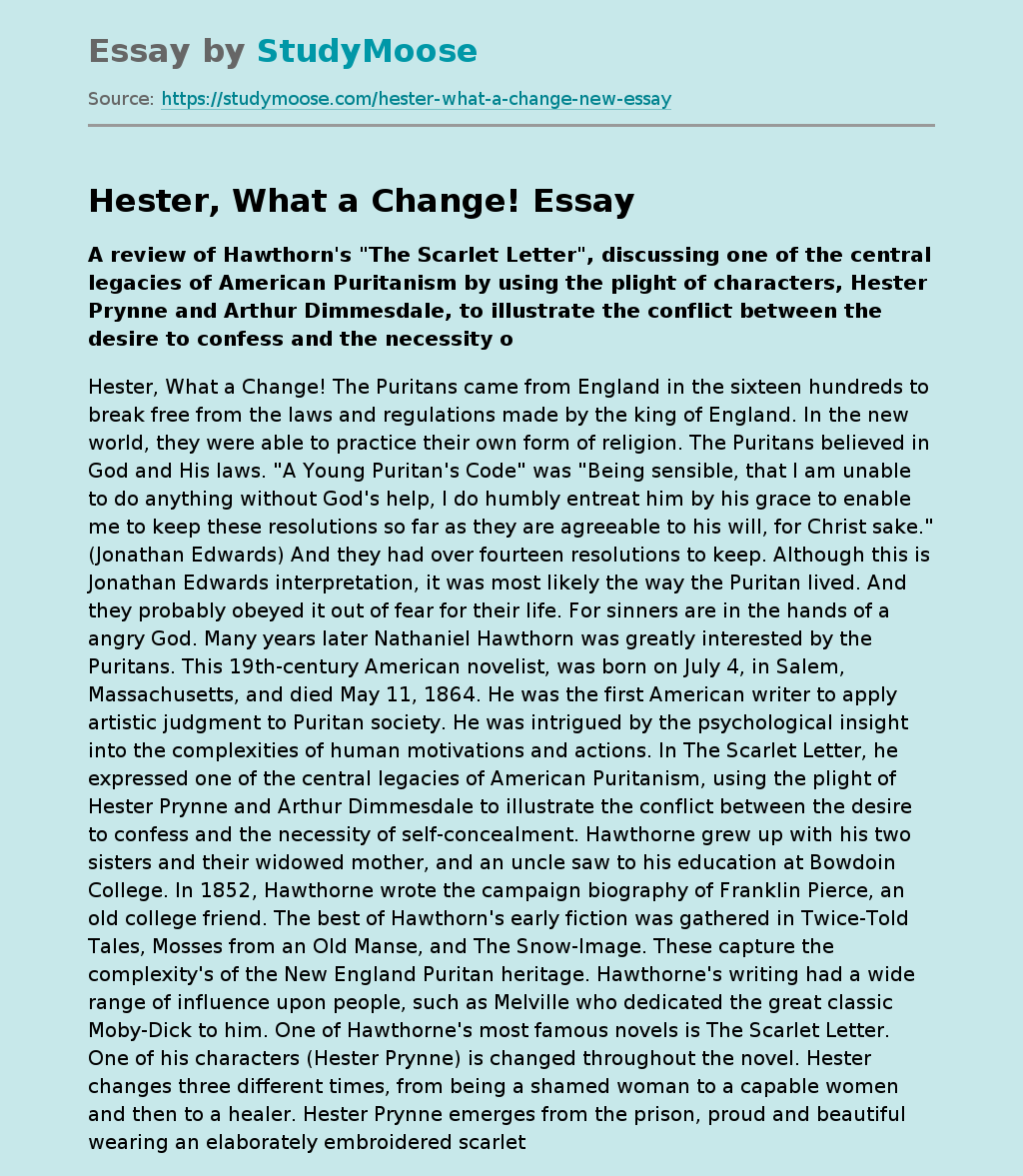