Compare the ways in which children are portrayed in Henry James’s The Turn of the Screw and William Golding’s Lord of the Flies. How convincing do you find each author’s treatment of evil in relation to his characters?

Everyone likes to think of childhood as a symbol of a time of innocence. People tend to look back on their childhood nostalgically, they remember it as carefree and often use the term ‘youth is wasted on the young’ these feelings have stayed with us for centuries and are incredibly deep rooted.

Don't use plagiarized sources. Get your custom essay on
“ Henry James’s The Turn of the Screw and William Golding’s Lord of the Flies ”
Get custom paper
NEW! smart matching with writer

These feelings therefore, create widespread outrage when evil becomes apparent in children or is inflicted upon them, For example the murder of James Bulger by ten year olds and also abuse and corruption of children. Children are thought of as vulnerable, when there vulnerability is taken advantage of, especially by another child a question is asked, is childhood innocence a myth?

The Victorians were aware of the religious doctrine of original sin, yet they were shocked that there was the suggestion that the two young children in Henry James’s The Turn of the Screw could be evil.

Golding presents children with a strong propensity to evil and disorder. Golding’s children are a mixture, from saintly Simon to barbaric Jack.

The fact that the two writers have different aims to come of their stories should be taken into consideration. Golding has written a fable, whilst his characters are all boys, and are recognisably boys; they all possess different characters that are intended to represent humanity.

They are all individuals, Ralph, Piggy, Simon and Jack but each one can be categorised. On the other hand James has written a ghost story, albeit of an unconventional kind.

Also, the two children in The Turn of the Screw are never actually shown from a different point of view from that of the governess, we never see Miles and Flora as wholly rounded individuals we don’t gain access into their thoughts and feelings and therefore could interpret them wrongly. They could be the corrupted accomplices of Peter Quint and Miss Jessel, as the governess believes, or they could be the sexually obsessed fantasies in her head. In Golding’s novel there is not a definite narrator. Golding allows us to know what the boys are thinking and feeling; this is particularly true of Ralph and Simon.

When Miles and Flora are first introduced into the novel they are seen through the romantic and idealising vision of the governess and therefore are portrayed to us as ‘innocent and beautiful; they have charm and perfect manners’ Yes, this is because the governess has a romantic imagination and is overwhelmed by her new responsibilities but it also could be because the children’s innocence portrayed in the first chapters of the novel makes their depravity later on seem all the more shocking to the reader as a contrast. When we first meet Golding’s boys however they are portrayed to us far more realistically, Piggy is an excellent example of this as he is the first most down to earth character we meet, you immediately get an image of piggy and the things he says are never questioned in the readers head to be unrealistic or fake about him. This is because his speech and manners aren’t perfect, which is what you would expect in a child.

For me both authors treatment of evil in relation to his characters are convincing. James approaches the question of evil by being deliberately inexplicit. We are never actually informed as to what offence Miles was expelled from school ‘I said things’- Miles. Also, in chapter six the governess feels a ‘sudden sickness of disgust’ when she learns from Mrs. Grose that Quint was ‘too free’ with Miles. Again we don’t learn exactly what this means; it could refer to some sort of sexual abuse.

I think this is a convincing and effective way of putting across the evil in the book because the novel seems to gain in power precisely because James refuses to spell things out for the reader. The ghostly apparitions are given a genuinely chilly impact ‘he slowly changed his place, looking at me hard all the while, to the opposite corner of the platform’ through the governess’s reaction the reader is made vividly aware of an atmosphere of evil.

For Golding evil is first manifest in the gradual breakdown of order amongst the boys: they neglect things they agreed to do together, such as building shelters; they pick on or shun those who are different, notably piggy and Simon. Roger begins to discover that he enjoys wielding power over others and even inflicting pain; the lure of hunting turns into blood lust; the boys succumb to the fear of the ‘Beast’ and superstition. Simon the visionary is the only boy with the insight to see that evil is a part of

human nature. The Beast is not an external creature to be feared, but it is inside each one of them. This evil is an enemy of reason and order and wishes to extinguish them. It results in murder, first of Simon, then of Piggy, and finally the boys intend to hunt and kill Ralph. I also find the evil in children implication convincing in Goldings writing as it implies that evil comes from within and is present in everyone, even children. The build up to children murdering each other in this story is convincing and therefore the evil in them is convincing as nothing on the island apart from a dead corpse was there to trigger the evil that came from only them.

Overall the two writers manage to deal with ‘evil’ in different but effectively, whilst both stories are of a different genre they both deal with the fact that evil may well be present in children. The children are portrayed differently because evil because apparent them in different ways, in James’s novel through the ghosts and in Golding’s novel through ‘The Beast’ however in both books evil is seen as a force, which consumes and destroys. Miles is destroyed at the end of James’s novel though in ambiguous circumstances. In Golding’s novel, the entire island is turned from a paradise into a raging inferno.

Henry James's The Turn of the Screw and William Golding's Lord of the Flies. (2017, Sep 24). Retrieved from https://studymoose.com/henry-jamess-the-turn-of-the-screw-and-william-goldings-lord-of-the-flies-essay 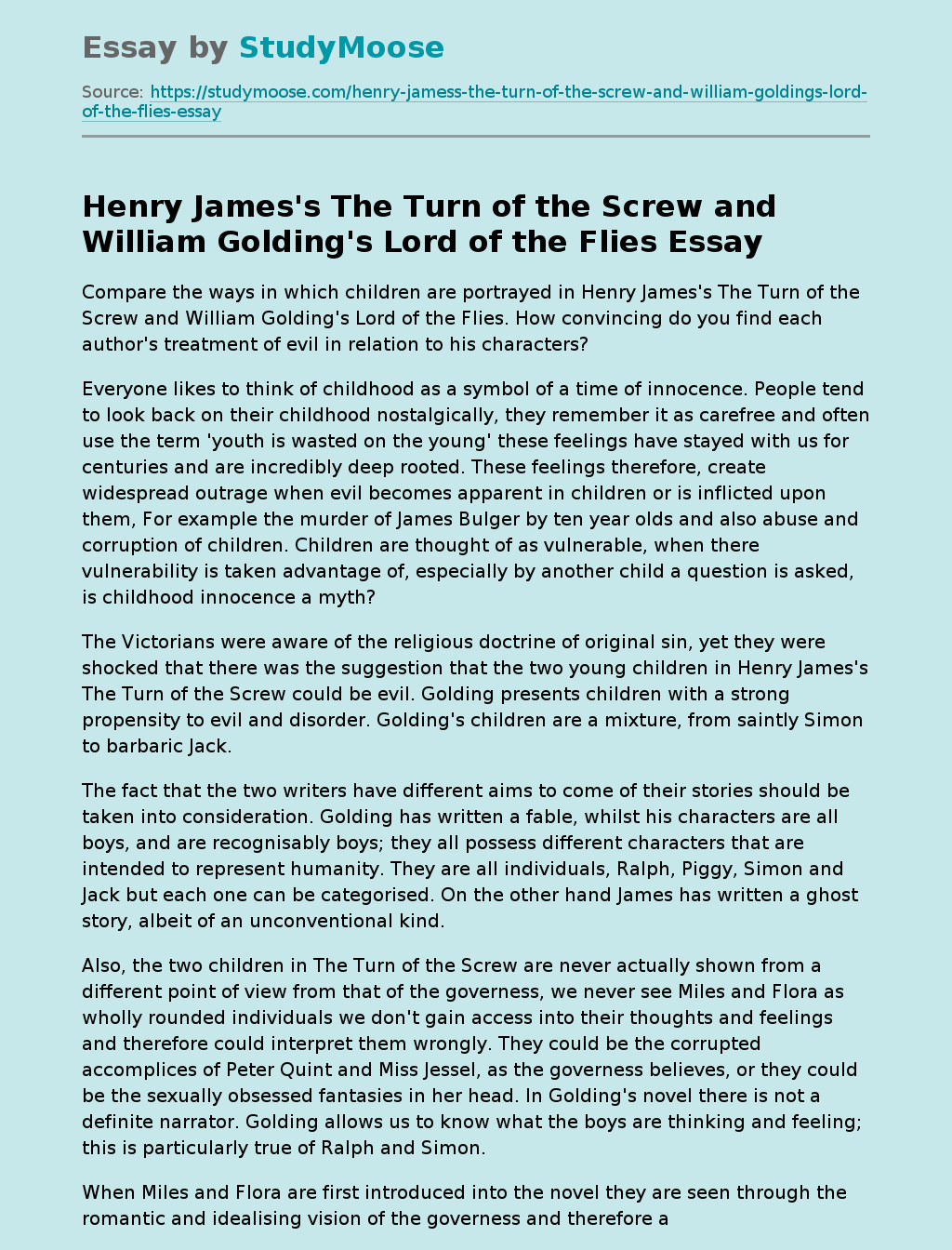