In Henry James’s Turn of the Screw, we are introduced to a vehicle of psychological instability in the form of a nameless governess. This governess is immediately flagged as unreliable upon accepting her position at Bly as a “higher call to duty.” In conjunction with Harold C. Goddard’s critical essay “A Pre-Freudian Reading of The Turn of the Screw,” wherein he analyzes the governess as being in an “overwrought condition” (161), her mental state suggests that the life she desires is not very complex, rather, it merely needs a supporting cast strong enough to bear herself as the heroine throughout the story.

Don't use plagiarized sources. Get your custom essay on
“ The Character of the Governess in Turn of the Screw by Henry James ”
Get custom paper
NEW! smart matching with writer

Thus, as her desire for dominion in a world of her own making manifests itself in her fixation on an imagined relationship between the children and the specters of the deceased Miss Jessel and Peter Quint, it is this very craving for simplicity on her part that causes an over-complication of the plot. The nature of this complication is fueled by a mutual fear ignited by the governess and then reciprocated by the children, particularly Miles, in a way that the governess then misreads in order to project her imagined life as the reality of the novella.

Proficient in: The Turn of The Screw

“Fear is like faith: it ultimately creates what at first is only imagined” (166). Goddard’s words hold particularly true for Miles and Flora, for it is their very vulnerability as children that makes them prime targets for the governess in her absurd quest to achieve a meaningful life. The relationship between fear and faith is, in a sense, representative of the one that she cultivates with the children.

As their governess and incumbent head of the household, she comprises the foundation of their lives, which psychologically prompts the children to look to her for protection. It is this tantalizing understanding of the children’s dependency on her that the governess cannot resist; in order to renew the feeling of power she holds again and again, she seeks to manipulate the elements of the quiet country home into a frenzy of fear. According to Goddard, the governess is acting in accordance with an unconscious urge to dramatize her life in such a way that confirms her existence as meaningful and necessary. Contextualized within his discussion, however, his primary rationale for her actions is derived from the strength of unrequited love between the governess and her employer (Goddard, 162).

While this is a key foundational component to the governess’s psyche, Goddard neglects to apply her need for love to others besides the employer, which deemphasizes the very thing she desires most: to be needed. However, it is this craving to be held in an important light that compromises her reliability in both the eyes of the children and the reader, with the marked difference being that the reader can track the trajectory of her obsession with dependence elicited by fear while the children can see and feel it, but not explain it (Goddard, 167). This then allows the governess to capitalize on the heightened state of alertness in the children, for she can now read their “queer” actions as in response to her conjured specters.

James’s use of children in the story serves a curious function, for the relationship that the governess cultivates with Miles and Flora is wholly dependent on her understanding of their temperaments. “Oh it was a trap-not designed but deep-to my imagination, to my delicacy, perhaps to my vanity; to whatever in my was most excitable” (James 14). This notion of a “trap” is demonstrated by her response in receiving the letter that Miles has been kicked out of school, and it is Miles from then on with whom she fixates the development of her imagined world around. We may assume that this is largely due to Miles’s ability to complicate and further the layers of reality the governess is attempting to reconstruct within the confines of the estate at Bly, for as the resident male and eldest child he represents both aspects of attention the governess craves: the dependency of a child and the engaging challenge of the opposite sex. This assumption returns us to the ever-present element of fear that the governess focalizes her relationship to her companions at Bly through, most notably the children.

This fear is then intensified by Miles’s keen intellect, for his transitory age allows us to share with him his shifting perception of the world around him, while his being a male puts him in a position to challenge the governess’s arranged reality. He knows that he has a claim to higher education, and also understands that the governess is the very person preventing his quitting of Bly. His relationship to the governess, then, becomes one of mutual distrust, something publicly bemoaned by her and yet she finds secretly exhilarating, for in a paradoxical sense the distrust actually veils her imagined world in reality, as it functions as a response to the occurrences within her projected world. This then illustrates a point of Goddard’s, for “it is precisely complication and not explanation that this woman wants-though of course she does not know it” (Goddard 162). As this complication is chiefly achieved through a daily lacing of fear into the life at Bly, the governess finds herself relying more and more on the peoples’ reaction to the supernatural to serve as a buffer between her and her fantastic visions, lest she lose herself to the current of fear and uncertainty entirely.

While Goddard does engage the governess’s desire for attention on the grounds of a psychologically rooted need, it may be necessary to take his examination further, such that the governess’s psychological attachment to the children is brought into consideration beside her compulsion to instill fear in them. For it is not just any fear, either, but the fear of two prominent adults from their past. “And that she may have the opportunity to save them they must be menaced: they must have enemies” (Goddard 164). Her choice of specters to use as fuel for the fear, then, suggests more of her psychological makeup than James directly divulges, for fear of the fantastic is arguably a concentrated form of fear itself, which in turn is generated by discomfiting contact with the unknown. This sheds a harsher, more calculating light on the governess, for it is exactly that contact with the unknown that children are most afraid of.

While seemingly paradoxical–the specters are, after all, Miss Jessel and Peter Quint–the governess is actually using all of the gray area shrouding the deaths of the two adults to serve as the embodiment of her specters. However, she neglects to realize that her fixation on Miss Jessel and Peter Quint are not the children’s fixation, and as such do not constitute the type of fear she is expecting. It is not until Flora’s outburst of crying and pleading to be taken away from her that the governess realizes that her power actually resides in being able to personally instill fear in the children.

This realization leads to a metaphorical clearing of the smoke, so to speak, with her being trapped in a circle of mirrors of her own creation. It is now, on the verge of her world’s collapse that the governess must actually convince her own self of the specter’s existence, so as to justify her existence to herself. Essentially, she must break into the mental fortress of her own creation, and give herself up to the insanity that fuels the very existence of the specters. But what, really, are the specters? Throughout the course of this essay they have been defined within the context of fear in relation to the children and as flashes of insight into the psyche of the governess, but as we see her coveted relationship with the children begin to shift and evolve into something she can’t control, we realize that the very power the governess obtained from them also exhorts a tax on her.

The web of interdependence expands, then, to include the specters as actual characters of substance whose sole function is to complicate the layers of constructed reality that the governess worked to create. As such, the specters constitute the foundation that the governess built her relationship upon with the children. As such, she finds herself trapped in a state of dependence with Miles in the final pages of the novel, where the extent to which she has immersed herself in her imagined world becomes apparent. “But, horrible as it was, his lies made up my truth” (James, 81). That the power has shifted now becomes apparent–that power being the fear of the specters, fear of the unknown–prompting the morbid tax of Miles’s life to be claimed in the wake of the power transfer from the governess’s hands to the projected reality. With Miles’s death, the link of dependence that the governess fought to establish is severed, and with it, the governess’s last shred of sanity is fed to the fire of fear she unleashed.

The Character of the Governess in Turn of the Screw by Henry James. (2021, Sep 14). Retrieved from https://studymoose.com/the-character-of-the-governess-in-turn-of-the-screw-by-henry-james-essay 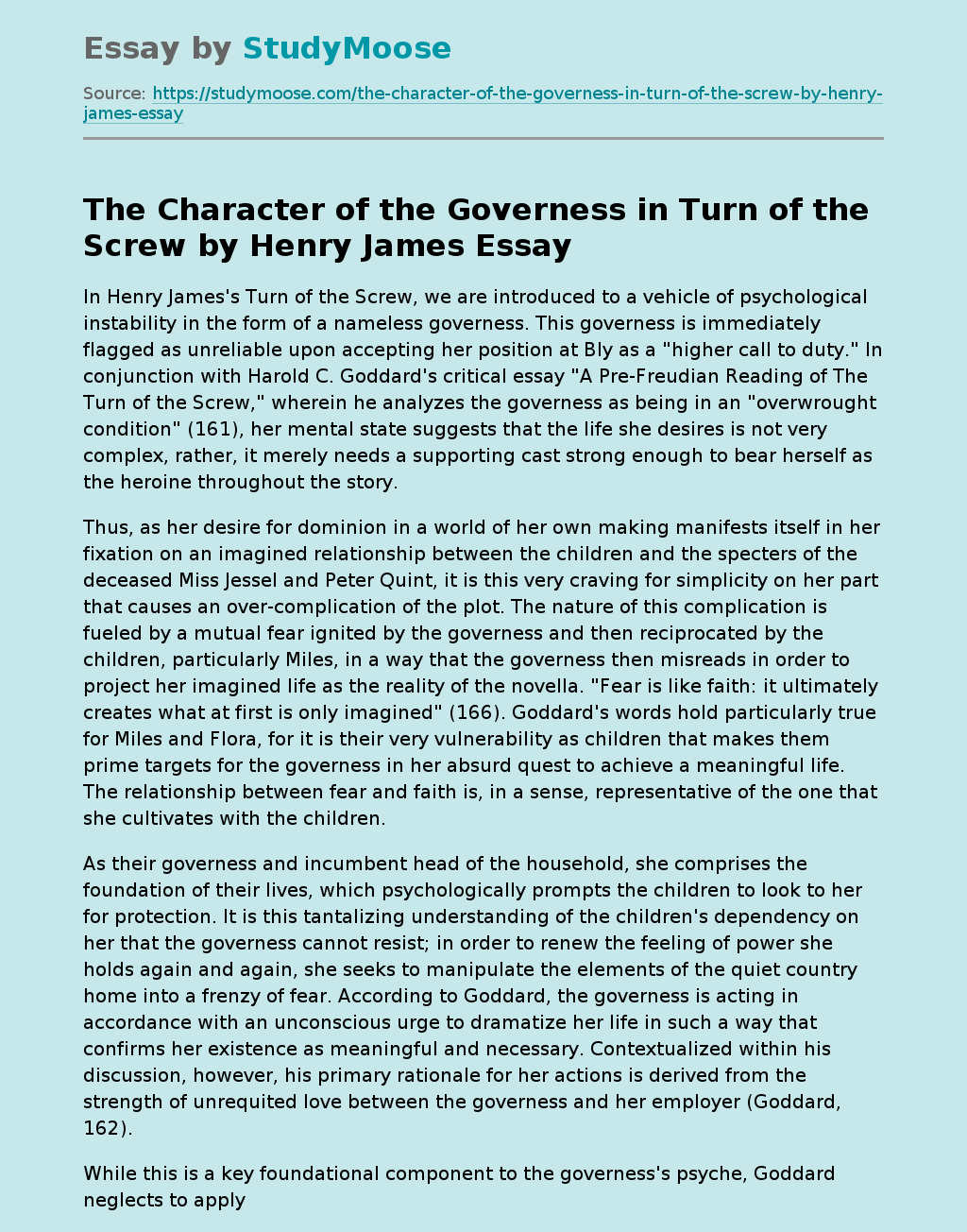