It is Christmas evening, and Nora Helmer has just arrived from Christmas shopping. She has a conversation with her husband Torvald that shows that he likes to act as being superior (while Nora obeys) and that for long they have had to struggle to save money, but now Torvald is promoted and they are going to be affluent. Separately arrive Dr. Rank, a good friend of Helmers’, and Christine Linde, an old schoolmate of Nora’s, who has not met her for many years.

Don't use plagiarized sources. Get your custom essay on
“ Henrik Ibsen – A Doll’s House – Plot ”
Get custom paper
NEW! smart matching with writer

While Dr. Rank spends time with Torvald, both women talk about their present prospects and begin to share their experiences about the long time that they haven’t met. Christine tells about the hardship that she has experienced- unloved husband’s death, her being obliged to take care of her sick mother and younger brothers afterwards. Nora promises to talk to Torvald to procure Christine a place of employment in the bank.

Christine feels pre-eminent and proud of her past struggles, and that provokes Nora to reveal that she has something to be proud of as well.

Step by step, Nora tells how, when she and Torvald were indigent, Torvald heavily overworked and Nora had to borrow money to pay for a trip to Italy to save her husband’s life, without him knowing. Since then, she has been struggling to repay the debt, which is soon going to be achieved.

Krogstad (Torvald’s inferior-to-be at the bank) arrives to see Torvald. Both women are anxious over his arrival.

Dr. Rank, coming into the room, refers to Krogstad as an amoral person, but Christine is reluctant to agree with him. Torvald promises her a position at the bank. Later, Krogstad has a conversation with Nora and proves to be her lender. It unfolds that Nora has forged her father’s signature to get the loan. Krogstad attempts to use Nora’s influence over her husband to preserve his occupation in the bank and blackmails her. However, Nora fails to persuade her husband, who is determined to fire Krogstad.

Act ll In the Christmas morning, Christine arrives and helps Nora with her Christmas ball costume. She begins to suspect that Nora has borrowed from Dr. Rank, which Nora denies. Nora has another argument with Torvald about Krogstad’s position in bank, and Torvald announces that Krogstad’s familiar attitude is what bothers him most. Nora fails to dissuade him, and Torvald sends a letter of dismissal to Krogstad. Dr. Rank arrives, and being tï¿½te-ï¿½-tï¿½te with Nora, reveals that he bears a lethal disease. Nora has had an intention of asking him money to settle the matters with Krogstad, but she gives up this idea after Dr. Rank reveals he is in love with her.

When Dr. Rank has left, Krogstad arrives. He wants to regain his reputation after a fraud that he has once committed himself, and, after receiving Torvald’s letter, has therefore decided that he wants to be accepted back in a higher position. He and Nora begin to argue. Finally, Krogstad puts a letter describing Nora’s crime in Torvald’s letterbox and leaves. Nora talks to Christine, who advises that Torvald should know the truth, yet promises to go and talk to Krogstad (later it turns out that he has left the city). Nora thinks about committing suicide; she assumes that Torvald will take all the blame for her crime on him and does not want to let it happen. Nora is becoming more aware of the world outside her family. To delay Torvald from reading the letter, Nora persuades him to help her practice tarantella for the Christmas party, leaving all other matters aside. She is overexcited, and Torvald agrees.

Act lll Christine has a conversation with Krogstad. It turns out that they have once been in love, but Christine has chosen to marry a wealthier man instead, assuming she has no other choice. She claims to have understood her mistake now and, wanting to be needed and useful again, offers to be with Krogstad and take care of his motherless children. This makes Krogstad elated, and he wants to demand his letter back from Torvald, but Christine dissuades him, saying that truth will only do good for the Helmer couple.

Meanwhile, Helmers return from the Christmas party. Tarantella has been a success, but Nora fails to divert Torvald’s attention from the letterbox. First he finds two cards with a black cross, announcing to Nora that Dr. Rank is dying. With thoughts of suicide in mind, Nora tries to leave, but Torvald reads the letter and holds her back. He is enraged and starts to insult Nora, who actually feels like she has done a noble act and expected gratitude for saving his life. Torvald claims that a woman like her does not deserve to bring up their children. All the time, Nora’s reaction is oddly calm. She understands the absurdity of her husband’s offences and their very marriage, and apparently is starting to doubt her love towards Torvald.

Then the maid carries in another letter from Krogstad containing Nora’s forged document. Torvald is relieved; he tears the bond into pieces and says he has forgiven Nora and asks her to forget his insults. However, Nora has understood that her marriage is actually a cage that does not allow her even to develop her own personality and have her own opinions. All her life she has had someone to agree with, and now Nora wants to live by herself and for herself. Refusing to accept any financial help, as Torvald is actually a stranger to her, she leaves. 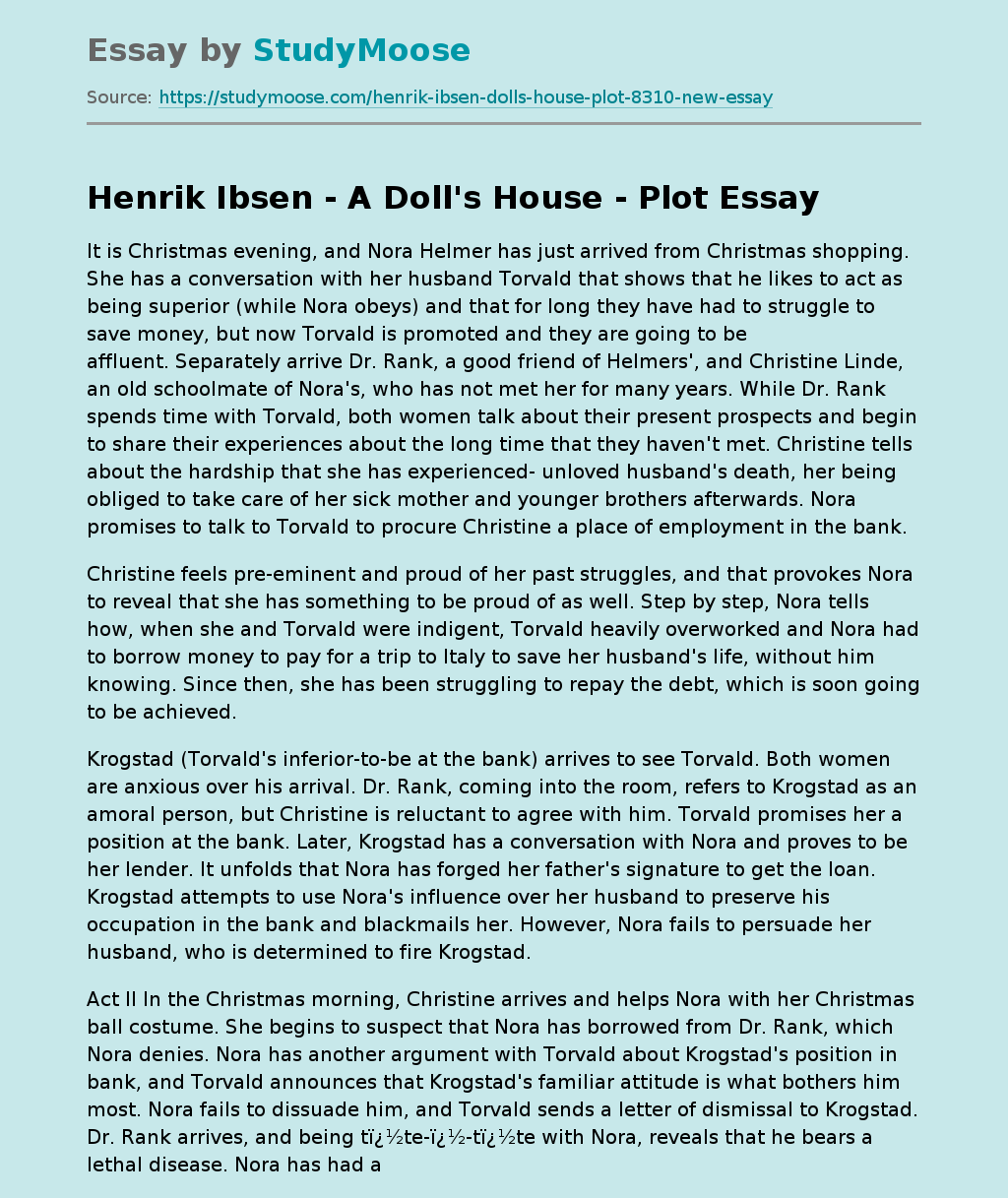