Approximately, over 2.1 billion (or 30%) of the world’s population are obese (Strasser & Fuchs, 2016, para. 2). Obesity is a public health problem as well as a worldwide epidemic due to the direct and debilitating consequences it exerts on life’s quality. Genuine action and hard work is promptly needed to end this global development. What is obesity? Obesity occurs when the Body mass index (BMI) is 30.0 or higher for adults (CDC, 2016a, para. 2). Conversely, teens and children are referred to as obese when their BMI is “…at or above the 95th percentile for children and teens of the same age and sex” (CDCb, 2016, para.

Don't use plagiarized sources. Get your custom essay on
“ Healthy Diet and Exercise for Weight Loss ”
Get custom paper
NEW! smart matching with writer

Proficient in: A Healthy Diet

1). Therefore, the issue of obesity is a major public health concern that needs urgent attention to avoid its long term incapacitating effects.

The incidence of obesity has grown tremendously during last thirty years. A case in point, the global population of overweight and obese people increased from 857 million in 1980 to 2.1 billion in 2013 (Dunham, 2014, p. 7). Out of the 2.1 billion people overweight or obese, NBC News (2017, para. 3) reported that 600 million adults and 150 million children have BMI numbers above 30 (which is indicative of obesity). This data indicates that the constant, common, and widespread increase in the number of obese people have more than doubled in the past thirteen years in both the adult and pediatric population.

Additionally, a study carried out for 33 years by Dunham (2014, p. 7), which revealed that rates of overweight or obesity rose 47% in children and 28% in adults, further buttress the increase in obesity trend in both adults and children.

Moreover, this devastating problem will even get worse in the future if nothing is done to curtail it. The population of obese people have been estimated to increase further by 2030. Johns et al. (2014, p. 1) estimates, which indicate that up to 57.8% of the world’s adult population (i.e., about 3.3 billion people) could be either overweight or obese by 2030 emphasizes future increase in obesity. Also, worthy of note here is the fact that developed countries with technological advancement, good medical care, and nutrition are not devoid of this public health issue. For instance, more than half of the adult population in the United States of America (U.S.A.) are obese. Data from Strasser and Fuchs (para. 2) reveal that in the United States almost 55% of the adults are overweight (or obese), while data from CDC indicate that one in every five school-aged children (ages 6–19) is obese (2016 b, para. 1). Therefore, something needs to done to curb this obesity menace, before it devastates the entire population.

Some of the causative factors of obesity are diet/nutrition (high in sugars), absence of exercise (sedentary lifestyle) (Wiklund, 2016, p.6), and eating “high energy-dense food” (Blair, slide 23; Johns et al., p.1). Therefore, healthy eating and active lifestyle should be encouraged to lose weight. Stressing the impact of obesity, studies on children aged 9 -14 years (from 1996 – 1998) discovered that over the years, participants’ BMI increased by small amounts due to consumption of sugary beverages. Equally, increasing overall caloric intake (by eating snack foods like chips, baked goods, and candy) also contribute to obesity (Sahoo, et al. 2015, p. 5). Since absence of exercise, high calorie, and sugary diets cause obesity; then, lifestyle modifications in exercise and nutrition can equally be used to achieve weight loss. So, exercise and nutrition play significant roles in managing weight.

Obesity has debilitating consequences on the health and daily quality of life. This is a disturbing trend because of the health hazards associated with it. Some of the direct and long-term medical risks associated with obesity are Type 2 diabetes, coronary artery disease (CAD), hypertension, (Johns et al., p.1) cancer, impairment in physical function, (Paez & Kravitz, 2000, para. 1; Strasser & Fuchs, 2016, para. 1), cholelithiasis (gallstones), fatty liver disease (hepatic steatosis), high cholesterol, and so on (Sahoo, et al., p.5). Additionally, this potentially serious healthcare problem (obesity) is associated with early death (or mortality). Confirming the link between obesity and death, Blair (slide 11) wrote that obesity is correlated to about 110,000 deaths per year. However, the negative consequences linked with obesity (and overweight) can be reduced or avoided completely through weight loss.

Weight loss interventions like exercise and diet play significant role in reducing, treating, and preventing obesity (Johns et al., p.1). Obesity results due to imbalance between the intake and the expenditure of energy. This causes the body to accumulate surplus fat, which increase the risk of developing chronic diseases or death (Strasser & Fuchs, 2016, para 2). Hence, exercising often and eating a healthy diet can help in weight reduction. Collaborating the link between diet and weight loss, a research study by Paez and Kravitz (2000, para. 3) on 24 obese women and men revealed that participants in the diet only group lost 5.5 kg (for women) and 8.4 kg (for men) by lowering their caloric intake by 945 kilocalories (for women) and 1705 kilocalories (for men) daily. Furthermore, recent research and a meta-analytic evidence confirms that weight loss can be achieved by adhering to any diet that effectively reduces intake of calorie (Johns et al., p. 10). On the effect of diet and exercise, Chao-Chun et al. (2018, p. 1) found in their study that both dietary and exercise intervention groups had significantly greater weight loss than control groups. Invariably, diet and exercise play vital roles in weight reduction according to research studies. Consequently, it is imperative to use these interventions (diet and exercise) to lose weight to avoid adverse consequences of obesity.

Obesity is a preventable universal pandemic, and a public health issue. Obesity has grown progressively in the last three decades. The high incidence of obesity is attributed to consumption of high energy-dense food, diet/nutrition high in fats, and lack of exercise. Obesity have direct and devastating consequences on the quality of life. It is correlated with many diseases such as type 2 diabetes, heart disease, and death. Medical risks associated with obesity can be reduced through weight loss. Interventions (like diet and exercise) play a vital role in weight reduction according to research. Ultimately, we can achieve a healthier society by avoiding obesity (as well as the morbidity and mortality associated with it) by exercising often, and eating balanced and nutritious diet. Therefore, obesity is a huge public health issue, which needs be addressed urgently to avoid its enduring devastating effects. 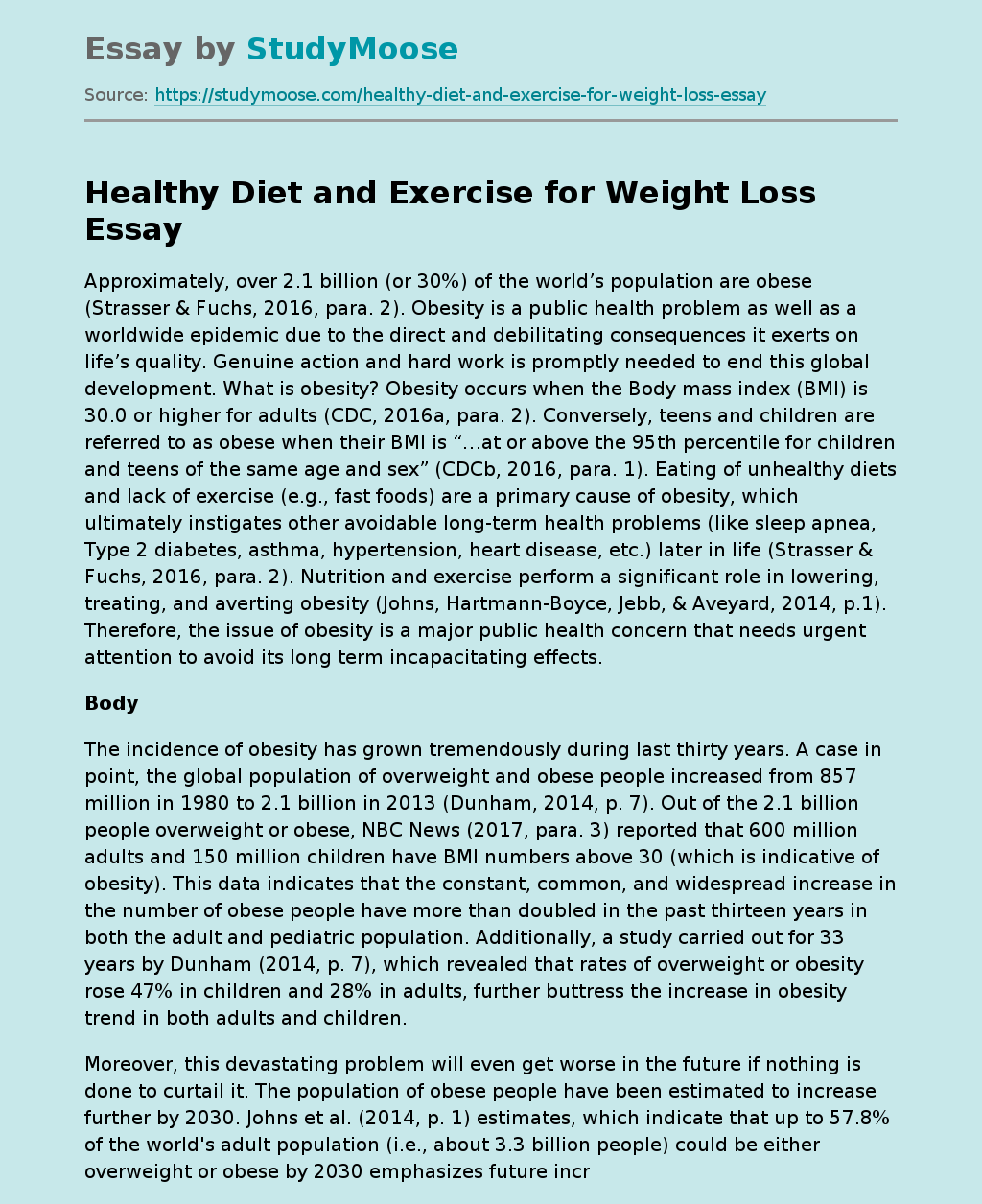