The stories “The Maypole of Merry Mount,” “The Minister’s Black Veil” and “The Wedding Knell” by Nathaniel Hawthorne contain themes that deal with the idea of darkness and death coming to overtake life. The elements of Romanticism present in these stories represent the extremes of this movement. Romanticism deals with freedom and spontaneity in happiness and brightness, and it also deals with wildness of nature—especially the dark side, such as storms and dark atmospheres. In his treatment of the characters, plots, and settings in these stories, one finds that Hawthorne uses these elements to conflict with each other.

Don't use plagiarized sources. Get your custom essay on
“ Hawthorne Romanticism ”
Get custom paper
NEW! smart matching with writer

Therefore, in these three stories one finds the lighter side of Romanticism coming under attack from the darker side in a symbolic representation of good versus evil. In “The Maypole of Merry Mount,” the scene opens to festivities, as the people in the town are shown to have great celebrations around the Maypole. The carefree gaiety does reflect the idea of spontaneity and vivacity that is an element of Romanticism.

Yet Hawthorne combines this with the darker (gothic) side of Romanticism in his declaration that “Jollity and gloom were contending for an empire” (Hawthorne, 55).

This foreshadows the coming of a damper on their festivities, as Hawthorne identifies shadows in human (Puritan) form that come to cover the brightness of the celebrations and declare them ungodly. This shadow is representative of hypocritical evil and darkness that come to dispel the light and the good by making illegal the use of the Maypole in dance and merriment.

In this way, Hawthorne identifies both the Romantic gaiety and the gothic gloom and pits them against each other in a fight that is won by the darkness. Hawthorne demonstrates this idea of gothic evil attacking light-hearted good also in “The Wedding Knell.”

During the wedding of two elderly persons, the funeral ring (knell) of a church bell starts spontaneously sounding. The dark meaning of this occurrence becomes evident in a spectator’s remark, “Good heavens! What an omen! ” (Hawthorne, 27) The idea of the mournful funeral bell tolling when wedding festivities should be occurring gives a gothic element to this story as well. The story becomes ominous, as the idea of bad luck for the marriage is implanted in the minds of the characters and readers. Hawthorne (through the character of the groom) puts on a show as the groom enters the church in the center of a group of mourners.

He writes, “When the spectral procession approached the altar, each couple separated, and slowly diverged, till, in the centre, appeared a form, that had been worthily ushered in with all this gloomy pomp, the death knell, and the funeral” (Hawthorne, 31). The effect of this is also Romantic in the gothic sense, and does demonstrate a kind of mixing or struggle between gaiety and gloom. Finally, “The Minister’s Black Veil” also demonstrates the gothic side of Romanticism as this Puritan minister, Mr. Hooper, persists in wearing a veil throughout the decades that he serves his town.

He even wears this when with his wife and to his grave. The fact that the veil is black reminds one of death and darkness that are characteristic of the gothic aspect of Romanticism. This black veil is a symbol of the evil of hypocrisy that men have a tendency to harbor. It can also be seen as evidence of the common theme in all the stories: that of the conflict between the gloomy and festive sides of Romanticism. The minister’s wife says to him, “There is nothing terrible in this piece of crape, except that it hides a face which I am always glad to look upon. Come, good sir, let the sun shine from behind the cloud” (Hawthorne, 45).

From this speech it can be seen that the veil prevents the minister’s wife from experiencing the joy of seeing her husband’s face. It represents, therefore, an attempt made by shadow to obscure the light of happiness and freedom. The three stories by Hawthorne contain strong themes of the conflict between good and evil, and each of these two contenders is represented by two extremes of Romanticism. The events in the stories find happy situations being frowned upon by the law, circumstances, or by people. In each case, gothic darkness triumphs in its attempts to dispel happiness and freedom. 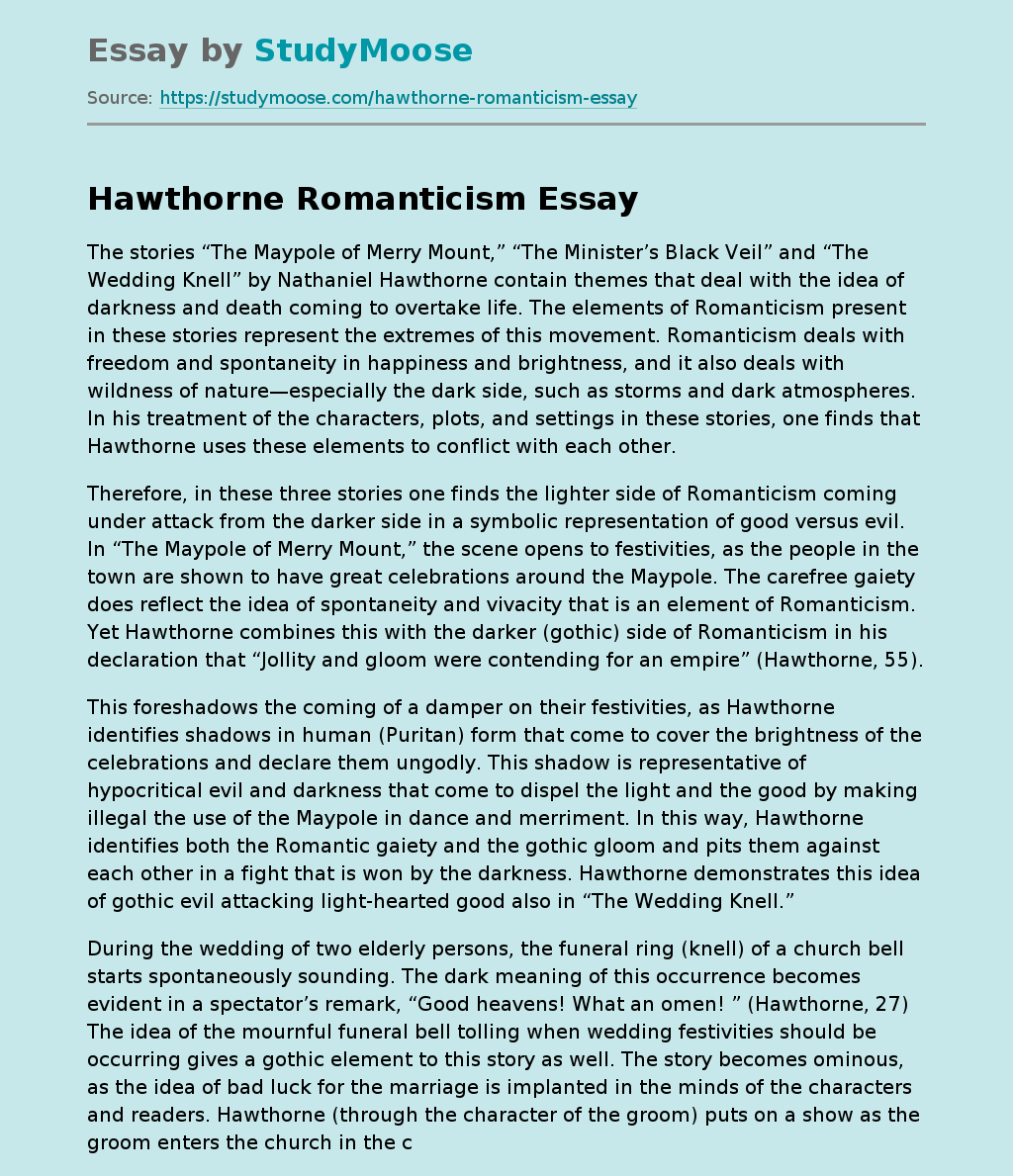