An example for this kind of behaviour is shown through the arguments which include John Proctor, Giles Corey and Thomas Putnam. John Proctor is a hard working farmer and Giles Corey is a good friend of John, who are both concerned about their land. They believe that Thomas Putnam is trying to take it and other people’s land by getting the girls to accuse Giles’s wife of witchcraft. Here, Miller is revelling the tension between these characters and it also shows the relationship between them and how it changes throughout the play.

Don't use plagiarized sources. Get your custom essay on
“ Hathrone and Danforth ”
Get custom paper
NEW! smart matching with writer

It goes from them arguing over land to them being accused of witchcraft.

Giles’s suspicion is proven to be correct as he gains information from an anonymous source that he will not name as he knows that person will be put in prison. He is subjected to peine forte et dure when he refuses to plea “aye or nay” to the charge of witchcraft. Miller uses this, among several other ideas, to show how most humans will give into persecution and accept injustice in order to save them their own life.

In addition, this implies that, in a society where one person or a small group of people can have much more power and a far greater say in matters; that it can corrupt a society and cause injustice and unfairness.

An example for this is in the opening act with Reverend Parris-a man, obsessed with materialistic worth and power, and, more critically, with a judge-Judge Hathrone and a Deputy governor Danforth.

Two of the main characters in Salem with power; they were mainly responsible for sentencing so many of the accused, even though they knew they could have been wrong. However, Hathrone and Danforth were both ordained and so called ‘Chosen by God’. So this would automatically put them in a position with power and higher authority; and because of this people would dare not question their judgement.

Another character which was portrayed as ‘Powerful’ was Abigail Williams. Abigail is Reverend Parris’s niece and to our knowledge, she has had an affair with John Proctor. So it was after John’s wife Elizabeth discovered their affair that she came up with a plan to get rid of her so that she could have John all to herself. So she starts to shift the blame and threaten others if they did not do what she wanted them to do. This is a reason as to why Abigail could be seen as a convening and evil girl; whose main concern is her own well being.

This is another way Miller helps to build tension-leaving us wondering what else is Abigail capable of? The word ‘Crucible’ has many definitions-which include; “A vessel made of a refectory substance such as graphite or porcelain, used for melting and cooling materials at high temperatures. ” This is to symbolise the tension within Salem-about there being pressure. This could also be linked in with “A severe test, as of patience or belief; a trail. ” And this is to symbolise a test in their faith as well as the actual trails that went on during that time.

As well as it emphasizing the power Judge Hathrone and Danforth had other the people in Salem, testing them as individuals as well as a community on a whole. Arthur Miller uses many factors to build up dramatic tension in the first act. One of the major contributors for tension is the way that the characters interact with each other. This is shown in both their speech and the way they react-which is shown through the stage directions. An example for this in act one is when Abigail and the other girls are with Mary Warren and Mercy within the Parris household.

From the stage directions we are able to tell that the dialog starts off quite calm and peaceful. However, as the conversation continues, and Abigail begins to talk of more sensitive issues, we can gather that many of the characters, especially Betty Parris, become more distressed that Reverend Parris is discovering what really happened in the forest the night they were found ‘naked’ and ‘dancing’. As Abigail’ language becomes more dark and sinister, we get the impression that the other characters are not comfortable with how the conversation is playing out. The atmosphere took a sudden turn when Betty shouted out; “You did…

You drank a charm to kill Goody Proctor… ” and “You drank blood, Abby! You didn’t tell them that! ” With these sudden out bursts and the use of punctuation, we can see how hysteria and overdramatic Betty is becoming. Abigail did not like this as Betty was revelling what really happened so she hits Betty, which implies that Betty was telling the truth and this was Abigail’s way to shut her up. Also, this shows her anger towards Betty and she uses her as an example for the other girls, that that is what she will do to them if they reveal the truth to anyone.

Along with the warning she gave them; “We danced… And that is all. And mark this. Let either of you breathe a word, or the edge of a word, about the other things, and I will come to you in the black of some terrible night and I will bring a pointy reckoning that will shudder you… And you know I can do it… ” This is the warning she gives the other girls and this basically means that she does not want the truth to come out or otherwise she will ‘come’ to them and deal with them.

Throughout the play, tragedy is portrayed through the characters as well as the idea of guilt. An example for this is shown in Giles Corey; he feels guilty for being the main reason/person for condemning his wife to prison and later on, death. He confessed that he could not pray while his wife was in the house and that she read a lot of books. This aroused suspicion for Reverend Hale-who then spoke of this to the court; then after she was put in prison and later she died. 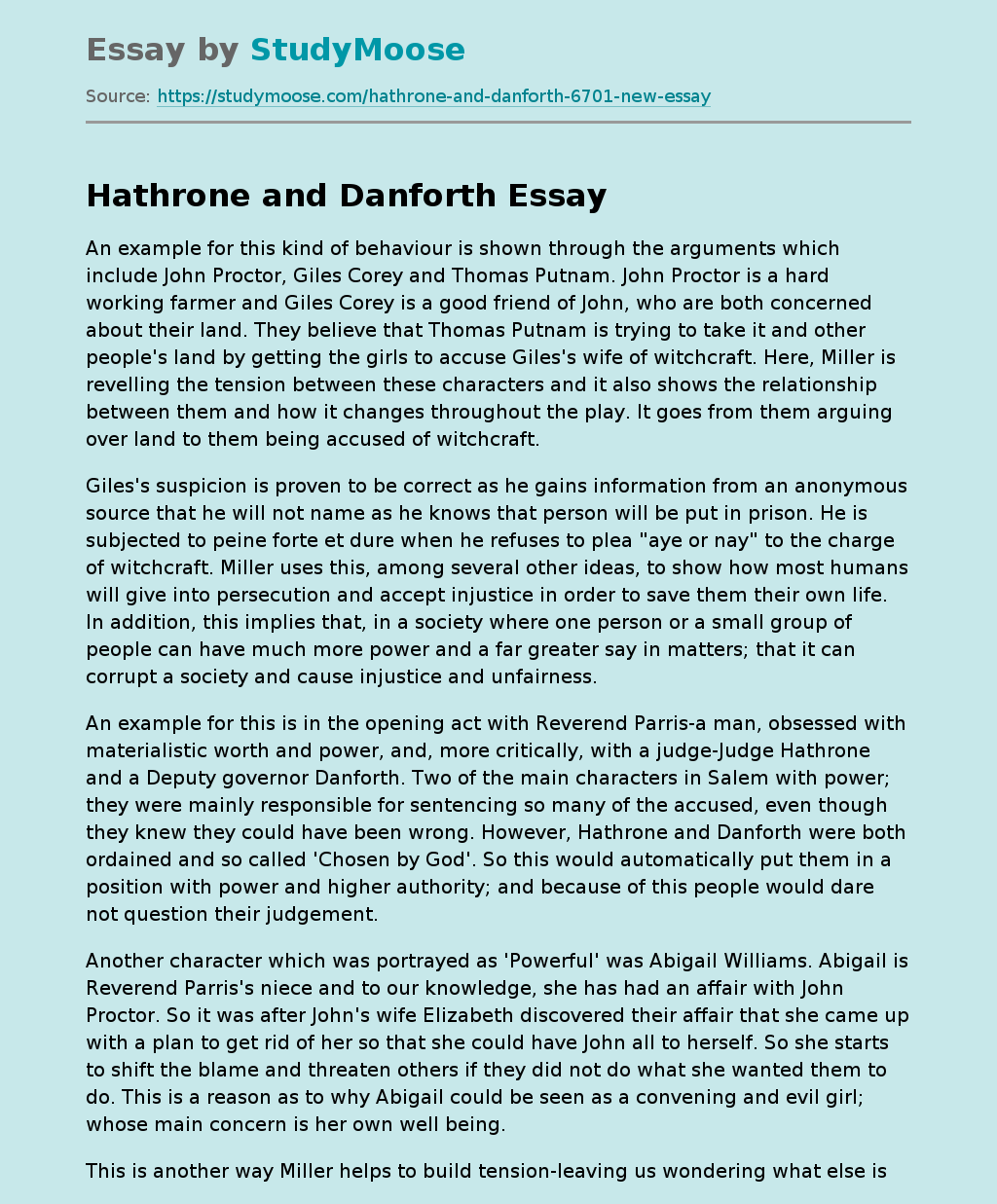