Has OPEC been a Successful Cartel?

A cartel is an organisation of producers grouped together for their own benefit. The most well known cartel in existence today is OPEC, Organisation of Petroleum Exporting Countries. Its members are some (but not all) of the most important oil producing countries including Saudi Arabia and Mexico. Most cartels try to raise prices at the expense of consumers.

The aim of this essay is to determine whether OPEC has been a successful cartel, this will mean I have to examine the strengths and weaknesses of OPEC which have been present throughout their existence of supplying oil.

Turn in your highest-quality paper
Get a qualified writer to help you with
“ Has OPEC been a Successful Cartel? ”
Get high-quality paper
NEW! AI matching with writer

This should allow me to make an appropriate judgement on whether OPEC has been a successful Cartel.

The brief history of oil prices show that oil was cheap in the 1950s and 60s. This was due to supply growing faster than demand. The early 1970’s saw a reversal of this trend, as demand increased faster than supply. This was mainly due to the world economy booming.

In November 1973, politics in the Middle East was to have a great effect on oil prices. With an existing tight market, the result was am explosion in the price of oil.

The war was soon over but its economic downturn effect was not lost on OPEC. OPEC, whose members at the time supplied over 60% of world demand for oil, organised a system of quotas amongst themselves, fixing limits on how much each member could produce. By slightly cutting back on pre-1973 production levels, they were able to increase the average price of oil to around $13 (as shown in the table above).

Price S2 As this demand and supply diagram

S1 shows, as Supply decreases from S1 to

average prices of oil to $13 by cutting

P1 back on supply.

However, this graph also shows that Quantity demanded for oil would also decrease. This would mean OPEC may well not be better of in terms of revenue as price increases and quantity demanded decreases (Price * Quantity =Revenue). However there was a fundamental reason why OPEC could successfully pioneer this massive price rise, this was mainly due to the fact that the demand for oil was inelastic in the short run.

Price inelasticity assumes that demand is not heavily affected by a change in price. The reason behind oil being an inelastic product was due to the fact that oil consumers had invested heavily in capital equipment such as oil-fired heating systems and petrol driven cars. In the short term there were no cheap alternative substitutes. As a result OPEC would receive a higher revenue by increasing prices; hence higher profits. This could be considered a strength of OPEC as a cartel.

However, in the longer term consumers are able to replace oil-powered equipment (substitutes). This would increase the elasticity of oil, hence an increase in price would have a more responsive effect on the amount demanded. As a consequence, when the demand for oil began to grow again in 1976,it was a slower rate than in the early 70s.

In 1978, Iran and Iraq went to war. Iran was a major oil producer, and the subsequent war severely disrupted supplies from these two countries. OPEC used this opportunity to tighten supply again. As a result rose again from $13 a barrel in 1978 to $36 a barrel in 1980. Total world demand fell once again. This gives an indication of OPEC being affected by external influences such as strains among their member countries.

August 1990 saw another blow to OPEC’s strangle hold over the success of producing oil in a profitable manner. Political events in the Middle East saw Iraq invade Kuwait, as a result oil sanctions were applied to the output of both countries by oil consuming countries. Other oil producing countries feared of a major shortage in supply as prices rose from $18 to $40 a barrel; as a result other non-OPEC countries reacted by increasing production in oil. Prices fell back as overall supply returned to normal. Since the successful counter by the US to retake Kuwait, the price of oil has seen a steady drift downwards in price. This has also led to OPEC losing out due to more countries increasing production in oil; causing an increase in competition.

Restricting competition is not necessarily easy. There are three potential problems that OPEC has to overcome due to it being a cartel. These are explained below:

An agreement has to be reached

The larger the number of firms, the greater the possibility that at least one key firm participant will refuse to collude. In the case of OPEC, this may well be difficult due to political disagreement that has regularly occurred during OPEC’s history.

Cheating has to be prevented

Once an agreement is made and profitability in the industry is raised, it would pay an individual firm to cheat so long as no other firms do the same. In the case of OPEC, with the increase in non-OPEC supply has led to strains among OPEC members. This has led to an increased incentive to cheat(mentioned further on in the essay).

Potential competition must be restricted

Abnormal profits will encourage not only existing firms in the industry to expand output but also new firms to enter the industry. Firms already in the industries that don’t join the cartel may be happy to follow the policies of the cartel in order to earn abnormal profits themselves. However, in the case of OPEC, it would be hard for another competing country to do this as oil is a scarce resource and also OPEC already has the majority of the market within their own organisation.

There are a number of reasons why OPEC has been one of the few international cartels that have survived over a long period of time, this is due to the following:

If OPEC wishes to reduce supply. Member countries simply produce less and leave their oil in the ground.

There are a relatively small number of members of OPEC

Member countries are able to exert a high degree of control over the volume of oil lifted within their own countries.

Oil production is not particularly affected by variations in weather

Hence supply need not fluctuate widely and randomly from year to year as it does in many agricultural markets.

Because non-OPEC producers tend to produce at maximum capacity, countries such as USA and the UK are unable to exert downward pressure on oil prices even if they wanted to.

In real terms, oil prices today are little different from those at the start of the 70’s. OPEC countries increased their revenues substantially in the mid-1970s and again in 1979-80 but these were short-lived gains. OPEC suffers from three fundamental weaknesses:

1) Large increases in oil prices in the 1970s led to stagnant demand for until the mid 1980s. Consumers substituted other types of energy for oil, there was a shift towards much greater energy conservation.

3) The increase in non-OPEC supply has led to strains amongst OPEC members. In any cartel there is an incentive to cheat. However, if countries cheat, then the price will fall rapidly. This occurred in the mid-1980s, when many OPEC countries exceeded their quotas, driving down the prices of oil. Which again would have an adverse effect upon profits made by OPEC countries.

To conclude, I believe that OPEC has suffered many problems associated with being a cartel. As a result I believe OPEC will not continue to be a successful cartel due to individual countries ‘cheating’ in order to gain extra profits (as mentioned previously). There is also the effect of OPEC being able to maintain high levels of profit only on a short term basis, until free market forces take effect and these profits once again return to normal. It must also be mentioned that the increase in supply from non-OPEC members has also created a downward pressure effect upon prices, therefore decreasing OPEC’s control on prices. Hence, profit margins being damaged.

The future for OPEC may well see more adverse effects occurring. As the problem of oil being a scarce resource becomes present, free market sources will look towards a substitute for oil. This may well see the demand for oil decreasing in the long term. Once again this will lead to OPEC losing its competitiveness as a cartel.

Has OPEC been a Successful Cartel?. (2016, Jul 19). Retrieved from https://studymoose.com/has-opec-been-a-successful-cartel-essay 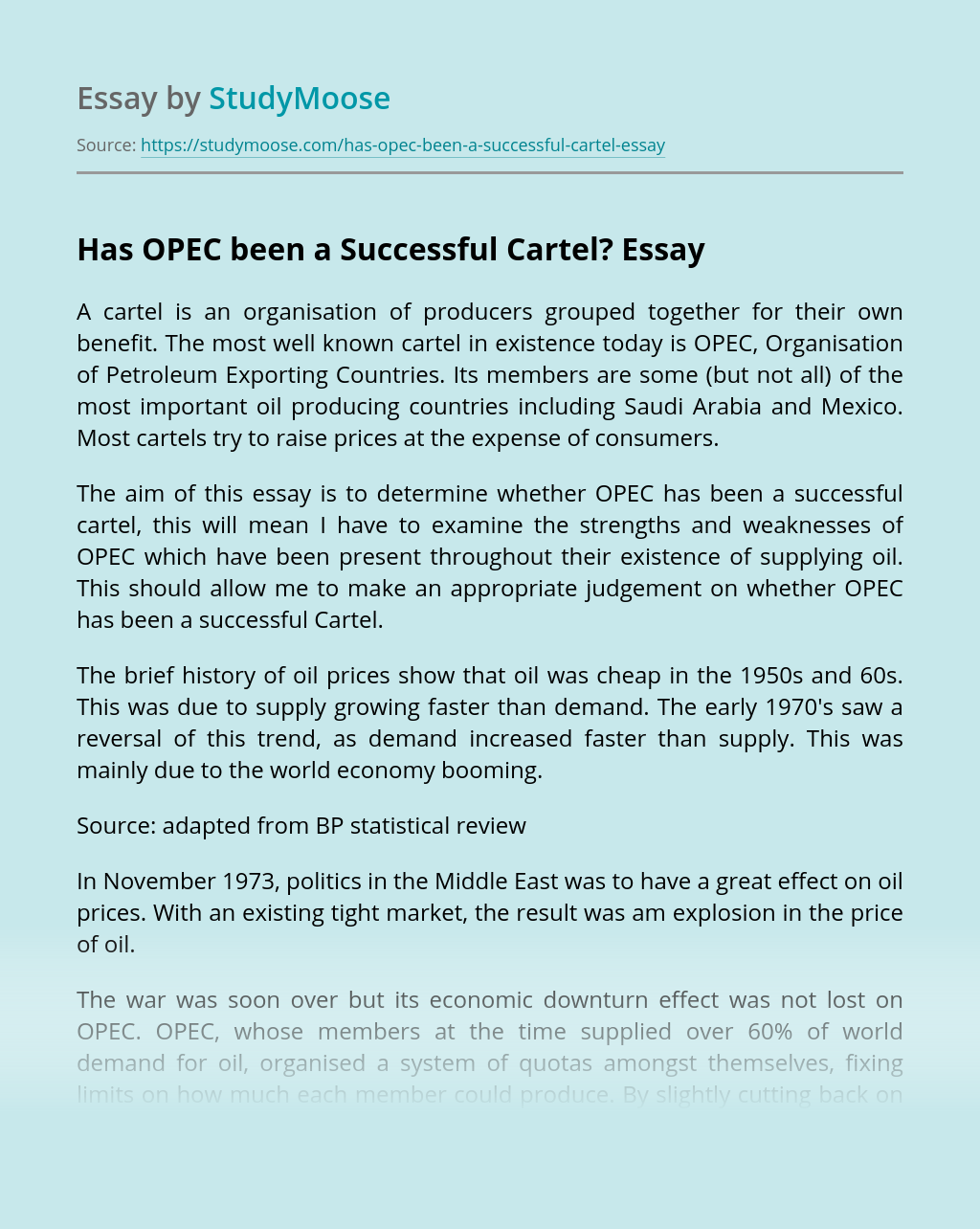 Turn in your highest-quality paper
Get a qualified writer to help you with
“ Has OPEC been a Successful Cartel? ”
Get high-quality paper
Helping students since 2015
Stay Safe, Stay Original