Harry Potter and the Chamber of Secrets

Harry Potter and the Chamber of Secrets is about Harry Potter and his friends at Hogwarts. In the beginning, Dobby went to Harry’s house and told him that he should not go to school this year. It is very dangerous. Harry went to school anyway. A cat and a lot of people got petrified. Some of Harry’s friends think it is him causing the problems. When Harry was playing Quidditch, Dobby made the ball hit him and Harry lost all of the bones in his arm.

Don't use plagiarized sources. Get your custom essay on
“ Harry Potter and the Chamber of Secrets ”
Get custom paper
NEW! smart matching with writer

Then, Professor Lockhart taught the students at Hogwarts how to fight evil. Harry spoke in Parseltongue which is making sounds like a snake.

Harry, Hermione, and Ron made a Polyjuice potion to catch Malfoy talking about petrifying all of the people. Then, Harry found a diary that writes back when you write in it. Tom Riddle is the one who wrote to him in the diary and told him that Hagrid opened the Chamber of Secrets.

After Hermione is petrified, Dumbledore and Lucius Malfoy took Hagrid away because Lucius thought Hagrid was petrifying everyone. Hagrid told Harry and Ron to follow the spiders. Harry and Ron followed the spiders to the forest and the spiders almost killed them, but they escaped.

Professor Dumbledore’s phoenix came and poked out the snake’s eyes and the magic hat gave Harry a sword. Then Harry killed the snake and stabbed the diary so Tom Riddle was dead. The best part of the book was when Lucius Malfoy gave Dobby a sock so he is free and doesn’t have to work for him anymore.

Harry Potter and the Chamber of Secrets. (2017, Mar 16). Retrieved from http://studymoose.com/harry-potter-and-the-chamber-of-secrets-essay 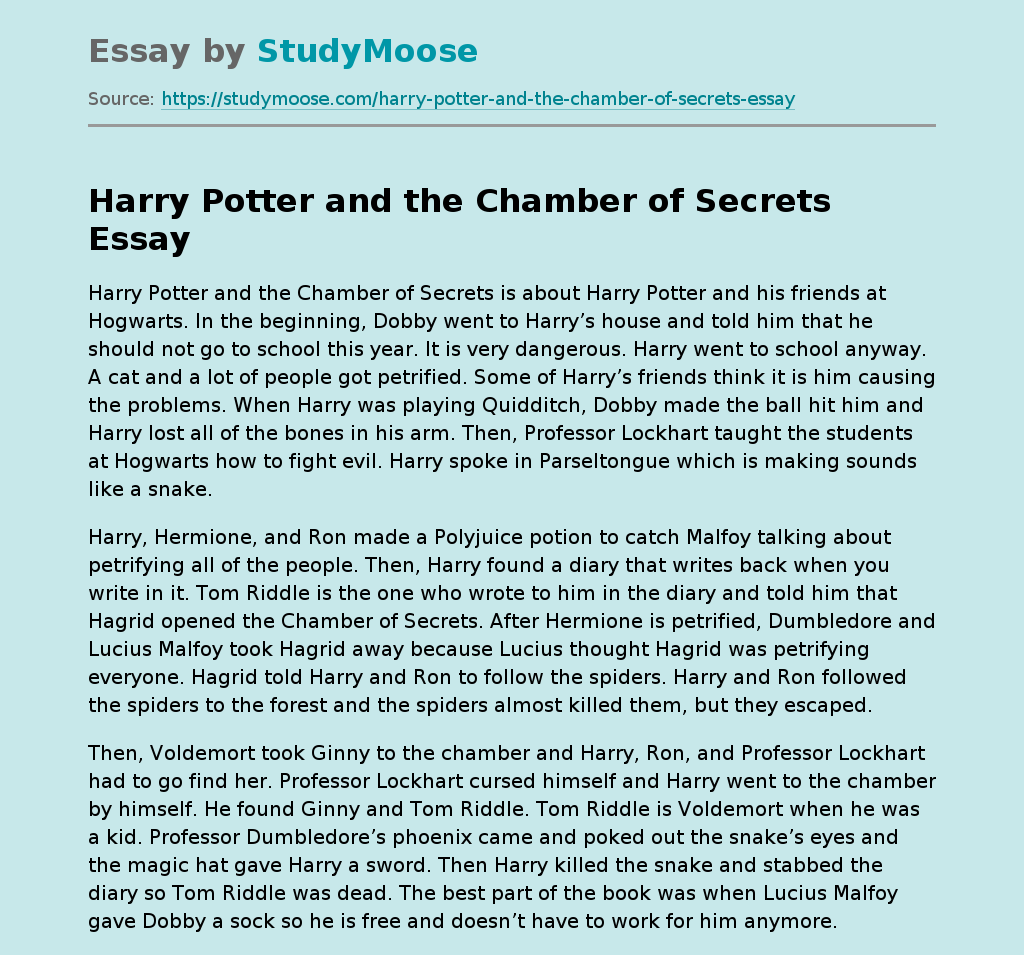