Harris Bergeron & by the Waters of Babylon

In the story, Harrison Bergeron, one learns that the author, Kurt Vonnegut, does not like the way society is. He does not like how people judge one another because one is not as attractive, or smarter, or funnier. He portrays this idea into the story by creating a society full of people that are equal. For example, in the beginning one gets to know that George is actually really intelligent as was all Hazel, but not as much as George. George cannot be smarter than Hazel or anyone, so to control the way he thinks he has to wear a mental handicap that receives different sounds to scatter his thoughts (Vonnegut, p.

Don't use plagiarized sources. Get your custom essay on
“ Harris Bergeron & by the Waters of Babylon ”
Get custom paper
NEW! smart matching with writer

34). Although, many people are fine with the way this society is being ran, in one section George explains to Hazel what would happen if he took his handicaps off then he will not be equal with everyone else, it is not fair to Hazel either because she has to keep wearing hers, “And pretty soon we’d be right back to the dark ages again…”(Vonnegut, p.

37). However, Harrison Bergeron, a 14 year-old boy, does not agree with this. “Now watch me come what I can become!” (Vonnegut, p. 39). He believes people should not be equal and be able to use the skills others do not have. On page 39, Harrison storms in and announces he is the emperor, and then he chooses his Empress and removes the handicaps from her and himself. Harrison does not want to be ruled by someone but rule himself; he wants to change the way things are being ran in this town.

In the story By the Waters of Babylon, John, a son of a priest and becomes a priest himself, lives in a society where the people have many different believes. For example, many things are forbidden like going east, going into a Dead Place, unless one is a priest or a son of a priest and to search for metal, cross the river and look at the place that was once the “Place of Gods.” On page 292, John’s father is reviewing all of the forbidden places. “All these things are forbidden,” I said, but it was my voice that spoke but not my spirit,” (Benet, p. 292). “My heart was troubled about going east, yet I knew that I must go.” (Benet, p. 293). John knows going to these places is a sin, but for some reason he seems to knot agree with this. As the story progresses, John is now a man and goes off into his journey. He searches for signs; his first sign was an eagle that went east. John knows it is a sin to go east, but his gut is telling him he should go. However, he believes this was a bad spirit trying to convince him to the wrong thing. His next sign were three deers, as well as a white fawn, another sin. Then he sees a black panther which attacks the white fawn. This represents a ying and a yang, good and evil. John says it is better to die than loose his spirit (Benet, p. 294). At the John decides he will travel to the Place of Gods, even though he might die he wants to know the truth. Once John arrived he realizes all those stories he was told as a boy were false. “… the tales say, that the ground burned forever, for I have been there….. It is not true either, what some of our priests say, that the island covered with fogs and enchantments.” (Benet, p. 296). John then explains that the Place of Gods is a regular dead place, with cracked roads, damaged buildings and high towers. The knowledge John has gained burned in him, he said on page 296. At the end of his journey he realizes that the gods were regular men that lived before him. He explains to his father there were never any real ‘gods’. John wants to share this knowledge with the people of his town; however his father says it is better to tell the knowledge little by little because if one ate too much truth at once, one may die of the truth. (Benet, p. 301). John says he learned that being a priest, ate knowledge too fast. (Benet, p. 301).

Harris Bergeron &amp; by the Waters of Babylon. (2016, Apr 02). Retrieved from https://studymoose.com/harris-bergeron-by-the-waters-of-babylon-essay 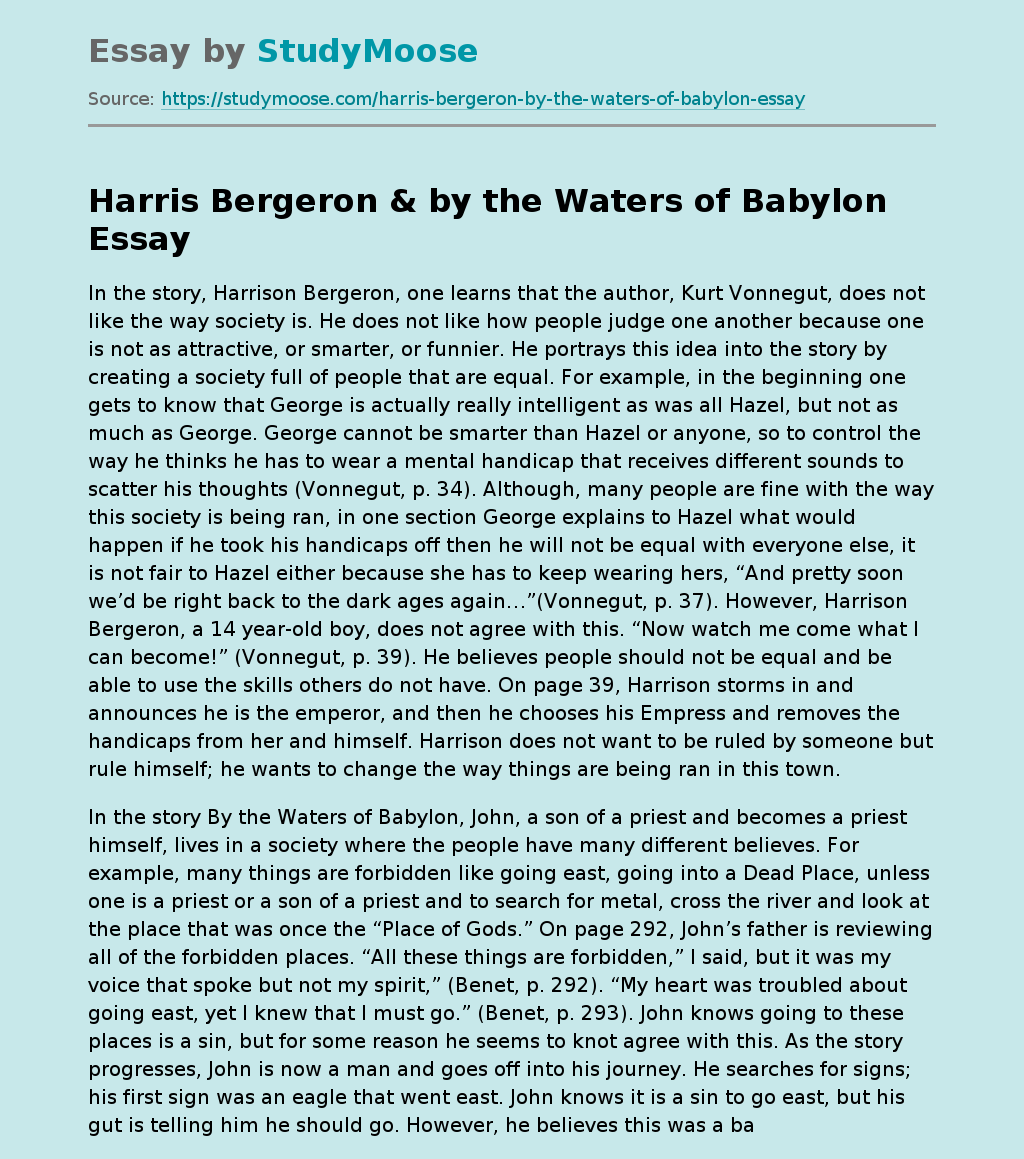