By the Waters of Babylon: Avoiding Apocalypse

The story “By the Waters of Babylon” takes place in both a tribe in a forests and later the remains of what we know was New York. As John, a son of a priest, makes his journey to his limit, he decides to go farther and reach the city of the god to understand more about them. Upon reaching his destination, he finds out that the “gods” were men and were all dead in the debris of their own city. The whole time, although John doesn’t know it, there is a greater advantage for an apocalypse to occur in the near future.

Don't use plagiarized sources. Get your custom essay on
“ By the Waters of Babylon: Avoiding Apocalypse ”
Get custom paper
NEW! smart matching with writer

As he grow more in conflict whether he should explore for more knowledge or not, he is slowly bringing humanity to another great downfall again.

Life as a young priest would have been fantastic in the new world, but John felt the thirst for knowledge as he had all these unsolved questions in his mind he could not put his hands on.

When he decided it was time to leave and explore, he significantly brought the end of humanity closer to themselves. Everything has its own apocalypse, yes if John had never bothered to explore, the mystery of the gods would have been kept out of the question for a longer period, until civilization would have grown more intelligent and rewritten history itself. As John’s expedition begins, so does the new age for the apocalypse.

As John heads east, he starts to see the distinct ways of the gods, like their roads and stone works, he’s getting close.

He understand his culture compared with theirs and also their

Differences. Once he gets to his last point of safe, he feels unsatisfied. He hasn’t solved it all, he hungers for more. He feels he should go back but knows he needs knowledge of the god, even if it’s the death of him. When he decided to continue forth with his trek, he self-brought the apocalypse of his species closer to its end.

As he arrives at the city of the “gods”, he is amazed at the structures they had created and can’t really identify everything, but what he does recognize is a dead god, the only thing was that, it wasn’t a “god”, it was a man just like John. He was speechless, both of them. As he arrived back to his tribe he told everything to his father who was also in amazement. He was told to not tell his clansmen, not all at once, but little by little. That was the last straw that he could removed to make certain the apocalypse arrived as soon as possible. Instead of informing of his findings, him keeping that colossal secret would have erased all that could ever have occurred in the future: the rebuilding of cities, the separation of tribes, the wars, etc. What has now to happen is the passing time till history reiterates once again.

My sources were from the Florida McDougal Littell Literature book, From the Story “By the Waters of Babylon”, by: Stephen Vincent Benét

By the Waters of Babylon: Avoiding Apocalypse. (2016, Aug 10). Retrieved from https://studymoose.com/by-the-waters-of-babylon-avoiding-apocalypse-essay 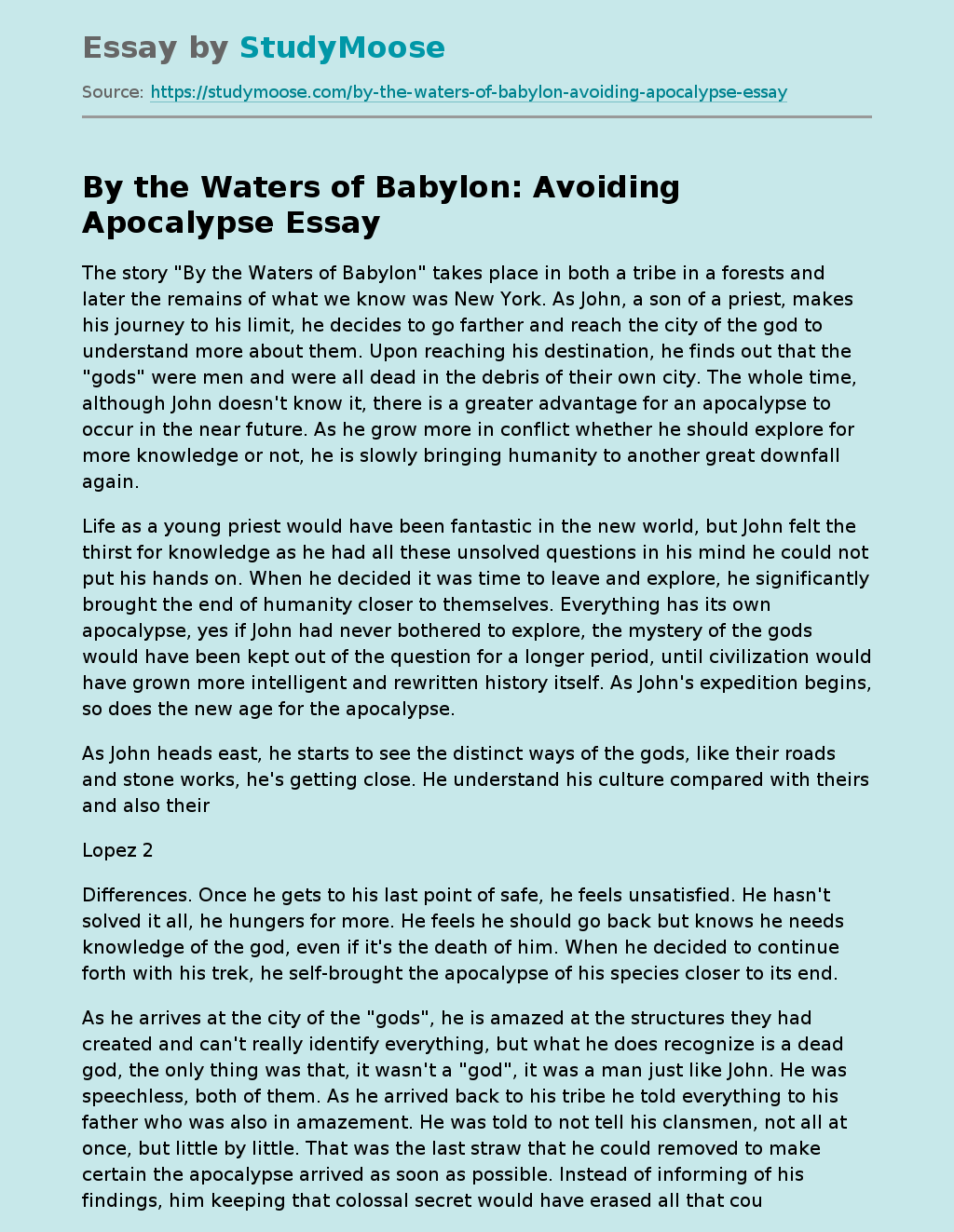