Haroun and the Sea of Stories Closed Reading

So Iff the Water Genie told Haroun about the Ocean of the Streams of Story, and even though he was full of a sense of hopelessness and failure the magic of the ocean began to have an effect on Haroun. He looked into the water and saw that it was made up of a thousand thousand thousand and one currents, each one a different colour, weaving in and out of one another like a liquid tapestry of breathtaking complexity; and Iff explained that these were the Streams of Story, that each coloured strand represented and contained a single tale.

Don't use plagiarized sources. Get your custom essay on
“ Haroun and the Sea of Stories Closed Reading ”
Get custom paper
NEW! smart matching with writer

Different parts of the ocean contained different sorts of stories, and all the stories that had ever been told and many that were still in the process of being invented could be found here, the Ocean of the Streams of Story was in fact the biggest library in the universe. And because the stories were held here in fluid form, they retained the ability to change, to become new versions of themselves, to join up with other stories and so become yet other stories; so that unlike a library of books, the Ocean of the Streams of Story was much more than a storeroom of yarns.

In Salmon Rushdie’s’, Haroun and the Sea of Stories various themes are explored presenting numerous arguments to the reader. One of the main themes within the novel is the importance of stories. Within the passage above Salmon Rushdie presents the changing nature of stories and their ability to become new versions of themselves, this is explored through the use of literary devices.

These techniques allow interpretation of the themes, present Rushdie’s ideas and further engage the reader. Some of the techniques used within the above passage are; third person narrative, repetition, synonyms, sentence structure and metaphor.

The above passage is key to Rushdie’s story, Haroun and the Sea of Stories and its themes as this is when Haroun is first introduced to the Sea of Stories. Haroun is challenged to make a decision between two wishes; to have his mother come back or for his father to regain his lost story telling ability. Failing to make either wish due to his eleven minute concentration, a result of his mothers departure, Haroun is possessed with a “sense of hopelessness and failure”(pg 72). These feelings foreshadow future angst Haroun will feel and overcome about the Sea of Stories and its potential destruction.

The use of third person narrative can be seen throughout the novel and passage. This allows the reader to be an onlooker to the story, a gain a more informative view of the story, allowing them to see numerous points of view rather than just one. Within the passage third person is used to engage the reader and distance them from the immediate situation while still allowing them to observe the beauty described by Iff the Water Genie. Examples of third person within the passage are “Iff explained” and “Iff the Water Genie told Haroun.

The passage portrays the nature of the sea and sets up the context for the oceans future with the use of repetition. The idea of change is presented; throughout the passage with the idea of stories being simple is challenged, uncovering their true complexity, detailing how the water is “made up of thousand thousand thousand and one currents, each of a different colour” (pg 72) and how stories have the ability to join up with one another and to become yet another story. This represents the idea that everything can change and nothing is susceptible to it, this can also be seen throughout the novel.

The passage personifies the ocean by talking of its playful nature of the currents “weaving in and out of one another” and its ability to change, as it has a mind of its own. The last sentence within the passage states “it was not dead but alive” the use of short sentencing emphasised its point and indicates its importance. However this short verse changes the mood of the passage, the reader is confronted by the abrupt word “dead” this single word changes the tone of the sentence and explores that along with the capability to be alive there also is the capability to be dead.

This foreshadows the next passage and the future of the ocean. Within the passage the metaphor of the ocean being a library is emphasised, it states that it is “the biggest library in the universe” this metaphor is used to try and example the extent of the sea and how many stories it possesses, connecting it to a familiar idea for the reader. However the metaphor is later contradicted renouncing the oceans likeness to a library of books due to the fluid form of the stories and their changing nature and ability to become new versions and to join up with other stories. It presents the ocean to be much more.

This is revisited throughout the novel, exampling how the ocean is “much more” and how it is a health source to plentimaws fish, directly impacting them as the ocean becomes more toxic, as well as a way of life to all members of gup city. In the passage synonyms are used to help emphasis the key points an example of this is the synonym ‘change’ and ‘new versions of themselves’. These synonyms are used to indicate the importance of the oceans changing ability allowing the reader to assess how it is important. This concept is seen to be a key point of the passage and one of within the novel.

The synonym of ‘not dead’ and ‘alive’ are used to stress the importance of the Sea of Stories, by stating its alive nature, the impact the sea has on others throughout the novel can be seen, to those who feed off it and keep it pure, for instance the plentimaw fish. The passage seen above is made up of four sentences; three extended and one truncated. The use of sentence structure is important as it seperates the ideas of the passage. Both the magic and splendor of the Sea of Stories and the realisation of it being “not dead but alive”(pg72) are seen within the passage.

Extended sentences are used to describe the magic of the ocean an its ability to effect others, in the passage it is seen to effect Haroun, as he has a sense of hopelessness and failure however from the magic of the ocean Haroun is affected and changed. With the use of extended sentences the Sea of Stories is described by Iff the Water Genie. The reader is presented with the imagery of the water and its numerous colours, forever moving, weaving and how it is constantly changing into something new joining with other stories. This description paints a picture to the reader allowing them to imagine the true nature of the Sea.

The second last sentence of the passage describes how the sea is ‘‘much more than a storeroom of yarns’’ as the stories are fluid form, holding the ability to become other stories, new stories. This allows the reader to interrupt the importance of the sea. The final sentence is made up of six words “it was not dead but alive” these few words hold great power as within the short sentence the reader is confronted with their meaning. Both the emotive words and change in tone, the reader is left questioning is there something more, with the words foreshadowing the future of the sea.

The first and final sentences of the passage are seen to interlink as the effect the ocean has on Haroun creates a sense of obligation for him to help fight to fix the ocean and to keep it alive. Within the passage above form is seen to produce meaning. This is done through the use of literary techniques, the use of these devices allow the purpose of the text to be seen. The meaning of the passage is to example change, the good and bad, and to portray the importance if the Sea of Stories to the reader. The passage and its form also hold meaning the novel as it describes the sea and illustrates its magic.

Haroun and the Sea of Stories Closed Reading. (2016, Oct 01). Retrieved from https://studymoose.com/haroun-and-the-sea-of-stories-closed-reading-essay 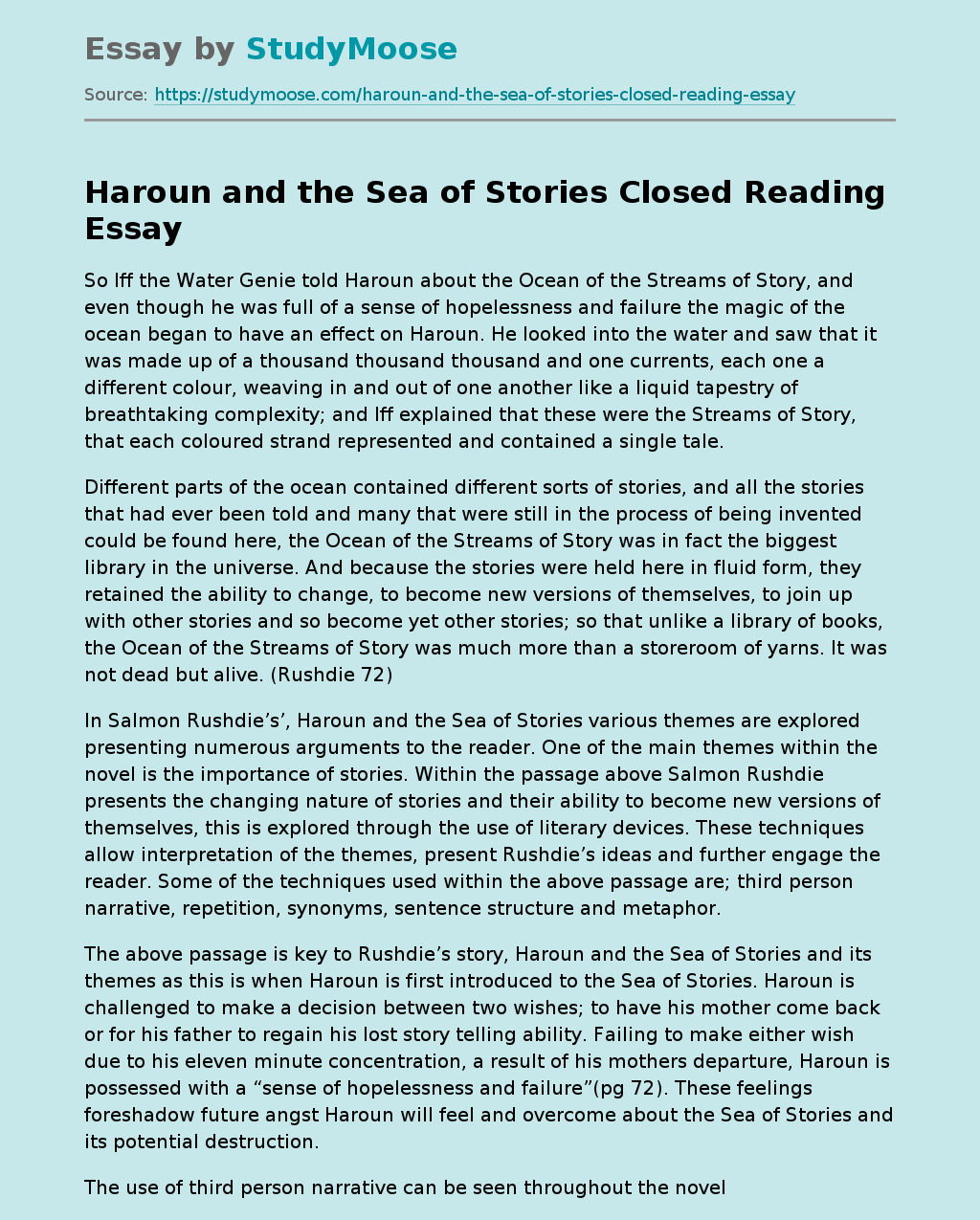