Hamlet in Shakespeare's, "The Tragedy of Hamlet"

This paper discusses Hamlet, the main character, of Shakespeare’s “The Tragedy of Hamlet” , who possesses a tragic flaw which obstructs his desire for revenge and ultimately brings about his death

Hamlet in Shakespeare’s, “The Tragedy of Hamlet” William Shakespeare, the greatest playwright of the English language, wrote a total of 37 plays in his lifetime, all of which can be categorized under tragedy, comedy, or history. The Tragedy of Hamlet, Shakespeare’s most popular and greatest tragedy, displays his genius as a playwright, as literary critics and academic commentators have found an unusual number of themes and literary techniques present in Hamlet.

Don't use plagiarized sources. Get your custom essay on
“ Hamlet in Shakespeare’s, “The Tragedy of Hamlet” ”
Get custom paper
NEW! smart matching with writer

Hamlet concerns the murder of the king of Denmark and the murdered king’s son’s quest for revenge. Its main character, Hamlet, possesses a tragic flaw, which obstructs his desire for revenge and ultimately brings about his death. This tragic flaw makes him a tragic hero, a character who is destroyed because of a major weakness, as his death at the end could possibly have been avoided were it not for his tragic flaw.

A group of players has arrived and Hamlet arranges a personal viewing of The Murder of Gonzago with a small portion of his own lines inserted.

Hamlet then observes one portion of the play in which one of the players put on a great display of emotion. Hamlet, besieged by guilt and self-contempt, remarks in his second soliloquy of Hamlet of the emotion this player showed despite the fact that the player had nothing to be emotional about. Hamlet observed that he himself had all the reason in the world to react with great emotion and sorrow, yet he failed to show any that could compare with the act of the player. Hamlet calls himself a “rogue and peasant slave” and a “dull and muddy-mettled rascal” who, like a “John-a-dreams”, can take no action. Hamlet continues his fiery speech by degrading himself and resoluting to take some sort of action to revenge his father’s death. Next, Hamlet’s flaw of irresolution is shown after his third soliloquy, the famed “To be or not to be…” lines. Hamlet directly identifies his own tragic flaw, remarking of his own inability to act. Hamlet, unsure whether or not the his uncle Claudius was responsible for his father’s murder, schemes to have The Murder of Gonzago presented to the royal court, with a few minor changes, so its contents would closely resemble the circumstances behind the murder. Reflecting on his own guilt, he talks of death, referring to it as the undiscovered country, and then continues by riddling his own feelings. He declares “conscience does make cowards of us all” and that the natural ruddy complexion of one intent, or resolute, on an action is “sicklied” over with the “pale cast of thought”. This makes an individual second guess his own actions and often times take no action at all, due to his own irresolution. These statements not only applied to what had occurred up to that point but also foreshadowed what was to occur. Next, Hamlet’s flaw of irresolution is shown during his fourth soliloquy.

Fortinbras, the Prince of Norway, and his army have passed by Hamlet and his escorts. Hamlet sees the action Fortinbras was taking in fighting and then examines Fortinbras’s efforts and bravery in an attempt to rekindle his own desire for revenge against Claudius for his father’s death. Hamlet remarks how everything around him attempts to “spur my dull revenge”, yet he takes no action. He notices how he thinks “too precisely on an event” and that he has “cause, and will, and strength, and means” to get revenge and how the evidence pointing to Claudius as his father’s killer is as evident as earth itself. Hamlet finally decides “my thoughts be bloody, or be nothing worth!” He has finally decided he must take action against Claudius in some form or fashion. Last, Hamlet’s indecisive pursuit in avenging his father’s death is shown as evidence of his tragic flaw. Hamlet encounters numerous opportunities to kill Claudius, yet he always comes up with some excuse preventing action. After first hearing of the crime from his father’s ghost, Hamlet immediately sets out to take action. Hamlet then began to think that perhaps his father’s ghost was conjured by the devil in an attempt to make Hamlet become irrational and kill Claudius, who might happen to be innocent, which would forever damn his soul. Hamlet then schemes to determine Claudius’s guilt through the play. Claudius views the play and becomes very uncomfortable with the situation to the point of stopping the play and leaving. This confirms Claudius’s guilt to Hamlet, and Hamlet again sets out to avenge his father’s death. Hamlet then catches Claudius in prayer, a rare time he will find Claudius alone. Hamlet, again, begins to think how Claudius will have had his sins forgiven and that he wants to damn Claudius’s soul. Hamlet resolves to wait and kill Claudius at another time.

Claudius, through all of this, realizes Hamlet knows of his crime and plots to have Hamlet killed by first sending him to England and then having him murdered. Hamlet escapes this ploy and Claudius plots again to have Hamlet killed in a fencing match. At the fencing match, Hamlet is wounded by a poisoned strike with the foil. Hamlet, in a dying act, kills Claudius by making him drink poison. Hamlet’s flaw of irresolution essentially destroyed him, as his failure to act in previous situations led to his own death. Hamlet’s irresolution is obvious in his actions after viewing the emotion of the actors, after his third soliloquy, in his fourth soliloquy, and in his indecisive pursuit of revenge for his father’s death. Hamlet was able to avenge his father’s death, but his own death due to his irresolution labels him as a tragic hero. The Tragedy of Hamlet masterfully shows how the inability to act, however noble the intentions, can be detrimental to character.

Hamlet in Shakespeare's, "The Tragedy of Hamlet". (2020, Jun 02). Retrieved from https://studymoose.com/hamlet-shakespeares-tragedy-hamlet-new-essay 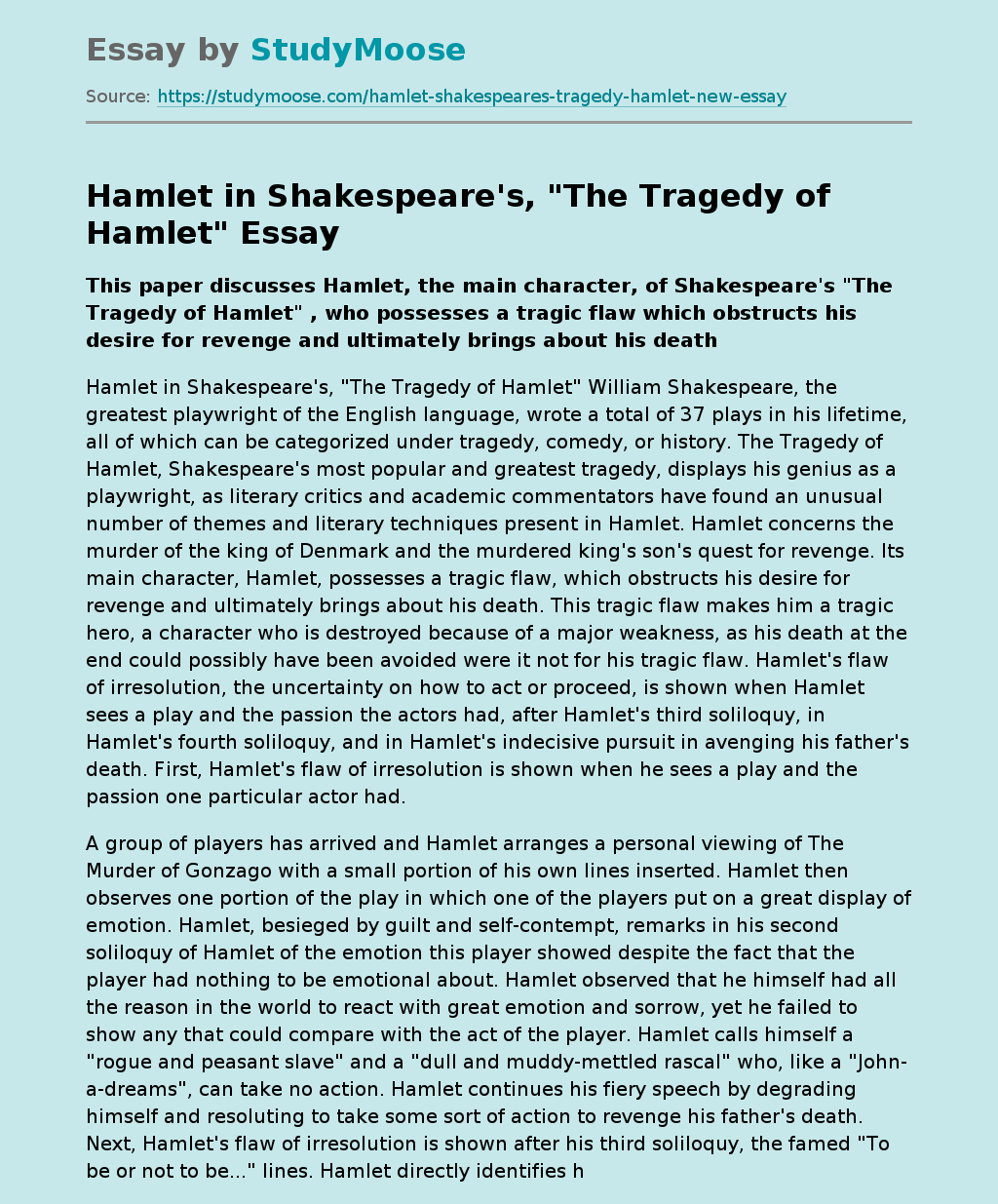